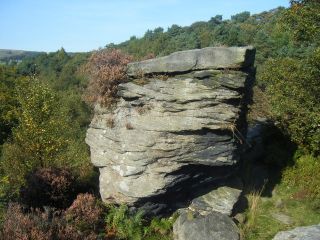 Hardcastle Crags
A magnificent wooded gorge in the South Pennines, with over 18 miles of footpaths, taking in waterside paths and waterfalls. The 'Crags' in the name do not refer to high peaks. Rather, the term is applied locally to the stacks of millstone grit which are a feature of the landscape.

Entymology enthusiasts will enjoy the Crags, as the area is home to the northern hairy wood ant (the rest of us needn't worry, as the little fellows are harmless!). The ants build prominent nests, using pine needles the way we might use thatch.

Hardcastle Crags covers over 400 acres of woodland. At the centre of the Crags is Gibson's Mill, a restored cotton mill that was one of the first in the area. The mill now acts as a visitor centre for the Crags as well as offering a look at our Industrial Revolution past.

So remote is the site that it is not connected to the National Grid for its electricity, but rather, it generates its own power through a sustainable, eco-friendly energy scheme implemented by the National Trust.

There are regular guided walks through the Crags, but visitors can also take one of four signposted walks which resemble a figure eight, centred on Gibson's Mill.

More self catering near Hardcastle Crags >>