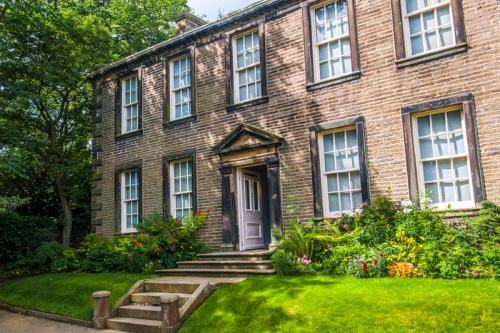 The Bronte Parsonage Museum was home to authors Charlotte, Emily, and Anne Bronte. They wrote their beloved novels here, and all three died in the Parsonage. The house has been transformed into a museum tracing the lives of this remarkable literary family. 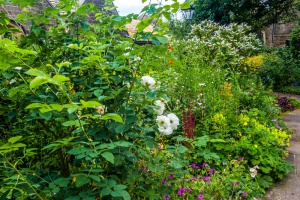 Flower garden outside the Parsonage

In 1778 a parsonage was built beside the medieval parish church of St Michael and All Angels in Haworth. In 1820 Patrick Bronte was appointed vicar and moved into the Parsonage with his wife Maria and their 6 children. Mrs Bronte died the following year, and her sister Elizabeth, usually called 'Aunt Bronte' came to keep house for the family. Tragedy struck again, when Maria died at the age of 11, followed shortly by Elizabeth, aged 10.

The remaining sisters, Anne, Emily, and Charlotte, and their brother Branwell lived the rest of their lives at the Parsonage, and it was here that they wrote the novels and poetry for which they are acclaimed. Together they gathered in the evenings and wrote together in the dining room, sometimes pacing around the dining table and bouncing ideas off each other.

They produced an astonishing amount of work, much of it based around imaginary realms they created called Angria and Gondal. Their output was prodigious, but it was not until 1846 that any of it was published. The sisters used some of their aunt's legacy to publish a collection of poems, hiding their true identities under the pseudonyms Currer, Acton, and Ellis Bell. Though the poems were well-reviewed, only 2 copies sold.

The first Bronte novel to be accepted by a publisher was Jane Eyre, written by Charlotte and published in 1847. Later that year Wuthering Heights and Agnes Grey were published together in a three-volume set.

Branwell, suffering from a combination of alcoholism, drug addiction, and tuberculosis, died at the Parsonage in 1848, followed by Emily later that year. Anne died the following year, and Charlotte followed in 1855. 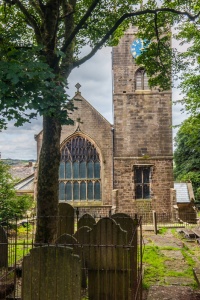 St Michael's church
from the garden

Patrick Bronte survived all his children, dying in the Parsonage in 1861. After his death, the contents of the Parsonage were sold at auction. It was not until the formation of the Bronte Society in 1893 that a collection of items related to the Bronte's life and works was begun.

These artefacts, known as Bronteana, were first put on public display in 1895. In 1928 Sir James Roberts bought the Parsonage and gave it to the Bronte Society. The museum is now the largest collection of Bronteana in the world, with a huge array of items including the mahogany desk at which Charlotte wrote her novels. It provides a fascinating glimpse into the lives of this amazingly talented, creative family.

The museum is extremely easy to find; it is well signposted from around Haworth and stands immediately beside the parish church of St Michael's. It's a bit of an odd complex of buildings, with a modern visitor centre and shop attached to the old rectory itself. You have to buy your ticket in the visitor centre, then go outside, around the corner, and in through the front door of the parsonage.

There is a small garden space outside the door, backing onto the neighbouring churchyard, and you can catch glimpses of the tower of St Michael's through the trees. There's a bench to sit and enjoy the leafy green enclave, but it seems unlikely the garden is really similar to anything the Brontes would have known. 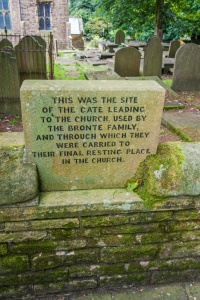 Site of the churchyard
gate used by the Brontes

At the rear of the garden area is a stone wall and a plaque marks the location of a gate to the churchyard, through which the Brontes passed when attending church services. Their bodies passed through the same gate when they were carried to the church for burial.

Inside the parsonage itself, you pass through a series of ground floor rooms, including Patrick Bronte's study, where he conducted parish business, and neighbouring dining room where the siblings gathered to write. Emily is thought to have died on the black settle against one wall. Above the settle is a plaster medallion showing Branwell in profile.

Each room has an information placard explaining how the room was used.

At the rear of the house is a kitchen, where the children would listen to their servant Tabby tell traditional folk stories about Haworth and the moors. Across the hall from the kitchen is a chamber that used to be a storeroom. after Charlotte married Rev. Arthur Nicholls in 1854 she had it converted into a study for her husband. Charlotte died in the study in 1855.

On the staircase landing is a beautifully made longcase grandfather clock, which Mr Bronte wound each evening before bed.

Upstairs are several bedrooms and the real beginnings of the museum part of the visitor experience. Mr Bronte's bedroom was used by Patrick Bronte after his wife Maria died in 1821. When Branwell Bronte was suffering from delirium tremens - the result of alcohol and drug addiction - he moved in with his father, and it was here that he died in 1848, at the age of 31. Patrick Bronte also died in this room in 1861 after serving as vicar for 40 years. 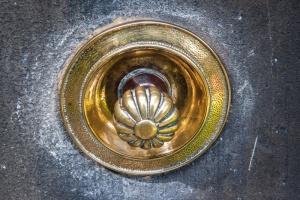 Doorknob on the Parsonage front entrance

Next is the Children's Study, where the siblings used to play and regale each other with tales of their imaginary worlds, Gondal and Angria.

Personal effects belonging to the Bronte siblings are displayed, including clothing, writing boxes, and a wealth of paintings and correspondence. One room is set aside to exhibit Branwell Bronte's abortive career as an artist. Here you can see his famous portrait of his 3 surviving sisters, Emily, Anne, and Charlotte.

The final part of the visit is a series of modern exhibits explaining the Bronte's life and works. One particularly fascinating exhibit explored how the siblings created imaginary worlds; fantasy realms peopled with heroes. The created models to illustrate the stories they made up, and penned amazingly small books for their characters to hold.

These imaginary tales were not just a childhood pastime; they continued to build on their imaginary realms into adulthood, and some of these tales eventually served as the basis for novels like Jane Eyre and Wuthering Heights.

There is an extraordinary wealth of documentary material on show, from first editions of the sisters' major novels to correspondence and poems. If you enjoy the Brontes, this is sheer heaven.

Don't miss the chance to visit St Michael's church, where the Bronte family were buried. 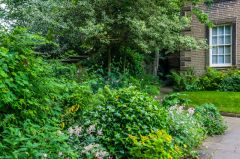 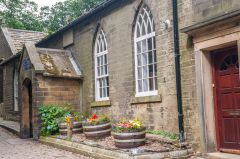