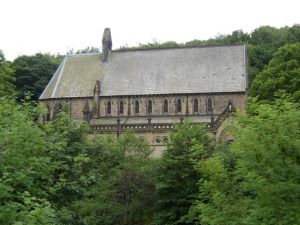 Copley, St Stephen's Church
A Victorian Gothic church in French style, built in 1861 by local architect WH Crossland. Crosland had studied under Sir George Gilbert Scott, and Copley was one of his first major commissions.

The design is Decorated Gothic, with a decided French influence. The church stands on a hill overlooking the Calder Valley and facing the model village built by industrialist Edward Ackroyd for his factory workers.

The church is tall and narrow, with a great sense of height. It features a polygonal apse and a stone bellcote unusually situated over the east gable of the nave.

The interior has survived almost untouched since the church was finished in 1865, with the exception of some very nice stained glass by the Hardman company, who were also responsible for the glass at the Palace of Westminster.

St Stephen's is no longer in use for regular worship and is cared for by the Churches Conservation Trust.