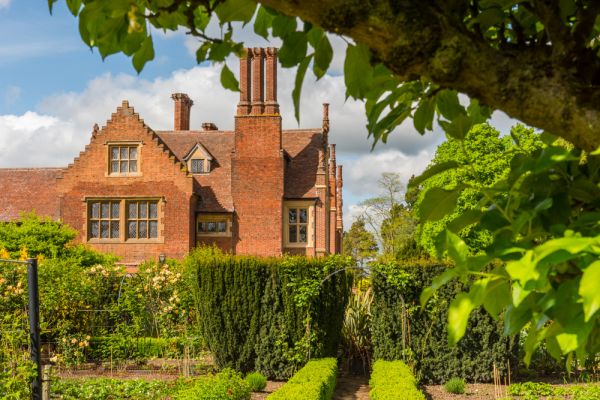 Haughley Park is a Grade-I listed manor house set in six acres of landscaped gardens. Within the grounds is a listed 17th-century timber-framed barn. The house was built in 1620 by Sir John Sulyard, on land originally granted to the Sulyards by Mary Tudor, the sister of Henry VIII.

In 1818 a prominent lawyer named William Crawford purchased the estate. Just two years later the manor was gutted by a major fire, and the house was rebuilt in Georgian style. From 1924 until 1956 the owner was Turner Henderson, a tea planter. 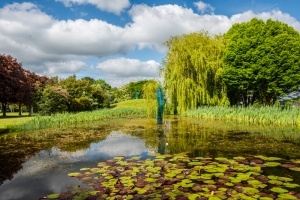 Modern sculpture in the garden pond

On his death, Turner left the estate to London Zoo, who promptly turned down the bequest as unsuitable. The manor was again badly damaged by fire in 1961 and rebuilt by the Williams family, who still own it today.

Though the house is rarely open to the public the gardens and woodlands surrounding the historic buildings are open to visitors during the spring and summer months.

I had a hard time finding Haughley Park. My satnav took me to Haughley village, and it was only by studying an OS map that I realised that the Park entrance is at grid reference TM002623 on Stowmarket Road, just southeast of Wetherden village. It is not, as you might expect, in Haughley, which is a mile to the east.

When you arrive at the estate drive there are signs for the wedding venue, but no signs for the gardens. With some trepidation, and with the suspicion that I might be trespassing, I followed the curving drive around to the rear of the mansion, where I found a small car park. A large welcome sign proclaimed that the gardens were open to Historic Houses Association members, which I am, so I started wandering about, looking for an indication of where to go.

It was only by sheer chance that I met a gardener who pointed out the walled garden and trail to the woodland walks. He said they like to keep things low-key, which they certainly were. I did not meet any other visitors, though it was a sunny summer day.

The walled gardens are small, with beautiful summer roses, but the surrounding landscaped grounds are a delightful mix of mature conifers and flowering shrubs, with a small pond as a focal point.

The trail to the woodland leads across open fields before entering a magical treed plantation where azaleas and rhododendrons grow in profusion beside quiet paths.

I was exploring the woodland and was surprised when a pair of Muntjac deer burst from cover and scampered down the path ahead of me - what a delight! The woodland also boasts several fascinating sculptures crafted from tree trunks, rather like spirits of the woodland.

Despite the fact that it was a rather peculiar visitor experience I really enjoyed Haughley Park. Wandering around the historic woodland plantation is a lovely way to spend a summer afternoon, and the house itself - at least the exterior that I could see - is a delight.

UPDATE: it appears that Haughley Park is now open only for special events. We'll update this page as we learn more. 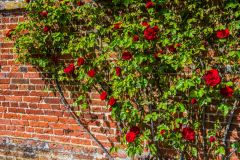 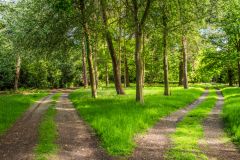 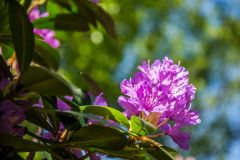 More self catering near Haughley Park >> 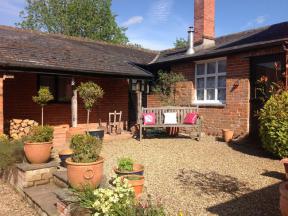