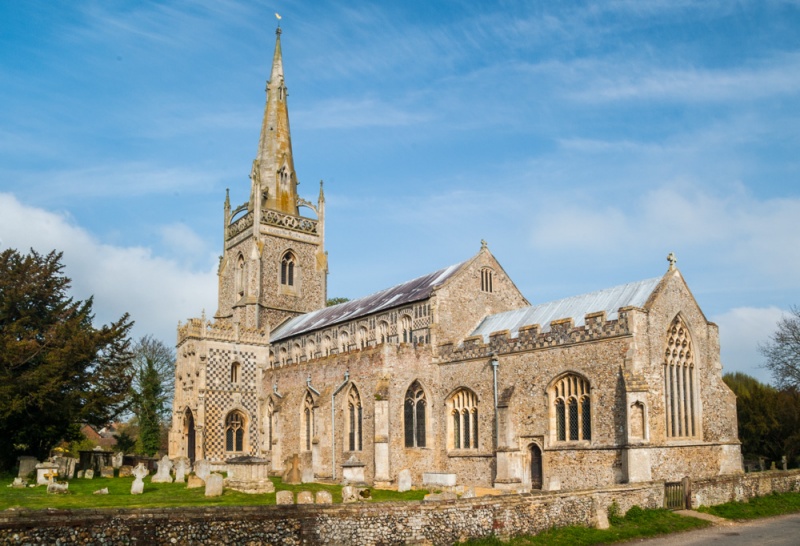 The church of The Blessed Virgin Mary in Woolpit is one of the great medieval churches of Suffolk, a county blessed with some of the finest country churches in England. Like so many other Suffolk villages Woolpit owes its superb church to the wealth of the medieval wool trade, but there was a church on this spot centuries before Suffolk wool merchants gained their wealth. 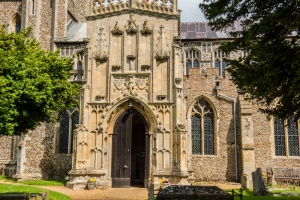 The earliest record of a church at Woolpit comes from AD 1005 when the Earl of the East Angles gave the church and manor here to the Shrine of St Edmund at Beodricsworth (Bury St Edmunds). The church remained the property of the Abbey until the Dissolution of the Monasteries. The Woolpit church originally sent 10 marks worth of tithes to support the monks of Bury, but at some point in the medieval period this sum claimed by the crown.

The monks of St Edmundsbury Abbey were furious, and determined to seek reparation. Two monks disguised themselves as Scottish pilgrims and without permission left the abbey and made the long journey to Rome, where they sought and obtained a Papal charter affirming their right to the money.

They were attacked and robbed on their return journey, but one of the monks hid the charter in his mug, and so preserved it. The pair's belongings had been stolen, so they had no choice but to beg their way back to the abbey. The Papal charter did the trick, however, and Woolpit's tithe once more went to help maintain sick monks.

Shortly before 1087, a new church was built at the behest of Abbot Baldwin. The only remaining feature of this Norman building is the priest's door in the south wall of the chancel. 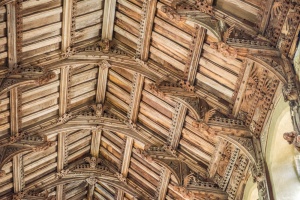 Woolpit became a destination for pilgrims during the medieval period, when it held a richly decorated statue of Our Lady in its own chapel. No trace of this chapel now survives but it was probably on the north side of the chancel, where the vestry now stands.

Alternatively, it may have stood at the east end of the south aisle. Pilgrims began arriving at least as early as 1211 when the Bishop of Norwich ordered that their offerings be given to St Edmundsbury Abbey.

The Shrine of Our Lady of Woolpit became extremely popular during the 15th and 16th centuries. Henry VI visited twice, and Queen Elizabeth of York, wife of Henry VII, ordered that a pilgrimage be made on her behalf in 1501. In 1538 Henry VIII ordered that Catholic images be destroyed, and it seems likely that the statue was pulled down at that time. in 1551 the Court of Augmentation ordered that the chapel itself be pulled down and the material sold.

A curious scene took place at Woolpit during the tumult of the English Civil War. The incumbent rector was John Watson, and when he was ordered to accept the new Puritan style of worship he refused. He was removed from his living, and the Earl of Manchester sent armed men to enforce the order. The village split into two factions, and a furious melee broke out in the church. The rector was removed, and retired to Norfolk where he died shortly after. 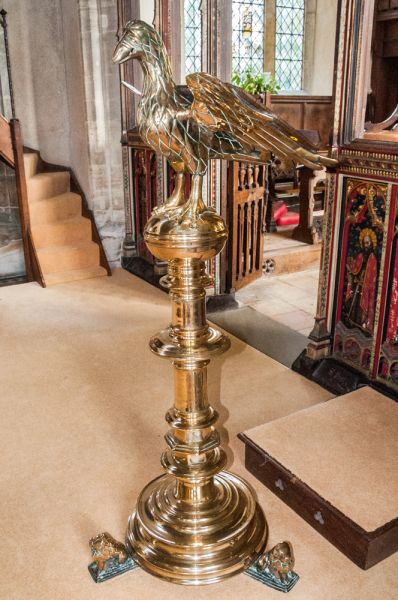 St Mary's is worth visiting for its superb double-hammerbeam roof, decorated with carved figures of angels. Iconoclast William Dowsing did his best to destroy the angels in 1644. His deputy found 80 'superstitious Pictures' some of which he destroyed and others he ordered to be taken down. Many of the angel's heads were defaced but these were sensitively restored in the 19th century.

Other highlights include beautifully carved medieval bench ends decorated with a wide variety of carved figures. These figures probably survived because the Puritans considered them heraldic symbols rather than religious. Eye-catching figures include griffins and a very mournful looking dog.

Another highlight is a finely crafted south porch dating to 1430-1455. Over the porch arch is a parvise, a small chamber possibly used for storing important documents. The porch roof is vaulted with exceptionally detailed lierne vaulting and decorated bosses.

The eagle lectern is a rare early Tudor relic, made around 1520 and one of just 20 surviving examples made to accept a chained Bible. A local tradition suggests that Elizabeth I gave the lectern to the church, though there is no proof of this. The queen did visit nearby Haughley Park in 1600 and sent one of her knights to visit Woolpit on her behalf. It is certainly possible that he gave the parishioners money that was used to buy the lectern. 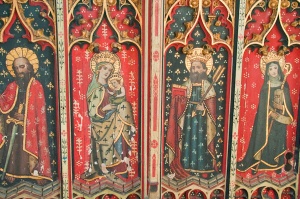 The screen is 15th century, though the gates are Jacobean. The screen is painted and gilded and retains the medieval beam made to hold the rood, or crucifix. The base of the screen is painted with figures of saints including St Withburga, St Edmund, St Etheldreda, and St Felix. The face of St Felix is actually a portrait of Henry Page, the serving rector at the time of the Victorian restoration. Over the arch is a beautifully vaulted painted dedication board, decorated with figures of angels.

The large east window is a beautiful example of Decorated Gothic style, with reassembled fragments of medieval glass in the upper lights.

Each end of the chancel choir stalls has a bench end with an intricate figure of a Green Man. Set against the wall is a fascinating carving of a woodwose, a wild man of the woods figure found throughout East Anglia.

Most of the building is Perpendicular Gothic, dating from the mid-15th century but the chancel and south aisle are 14th century. The tower and spire were added in the 1850s by architect Richard Phipson after the medieval originals were damaged by lightning. This is actually the third tower; the first was damaged in a thunderstorm in 1602 and the second was blown down in a hurricane in 1703.

Woolpit church is located just a few steps from the market place and is usually open to visitors during daylight hours. 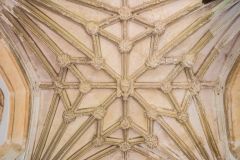 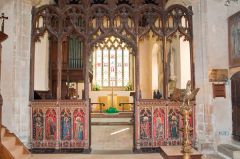 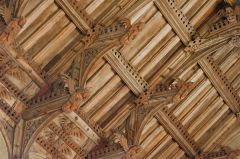 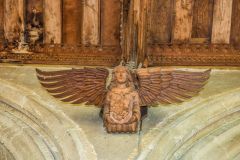