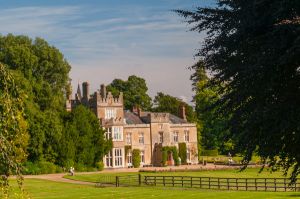 Titsey Place
The attractive Victorian country house of Titsey stands in lush green surroundings on the edge of the North Downs. The estate was owned by successive generations of the Gresham and Leveson Gower family since it was purchased in 1534 by Sir John Gresham, a rich London merchant.

In the Civil War the Greshams supported the King, and the house was seized by Parliament. Luckily, it was later returned, and Charles II made Marmaduke Gresham a baronet in thanks for his family's support. The family fortunes sank in the early 18th century, partly due to the excesses of another Marmaduke Gresham, who died in debt.

His son John married a rich heiress and used the money to help rebuild Titsey. Sir John tore down much of the old manor house and created a symmetrical Georgian house of red brick. This neat little 18th-century house is the core of the current Titsey Place.

The house then passed to the Leveson Gower family by marriage. When the last of the Leveson Gowers died in 1992 the house passed to a charitable trust, who restored the house and opened it to visitors, along with the garden, and recreation of the original kitchen garden.

Beyond the house is a hillside beech plantation stretching to over 200 acres. Near the house is the Gothic Revival church of St James, which contains family monuments.

More self catering near Titsey Place >>