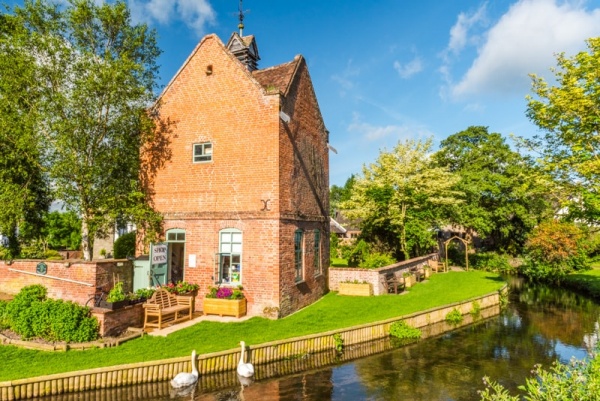 Eardisland Dovecote and swans on the River Arrow

North-western Herefordshire is known for its pretty 'Black and White' villages, blessed with an abundance of picturesque timber-framed cottages, many of them thatched. Of all the Black and White villages Eardisland may be the most beautiful, with picture-postcard cottages and a restored 18th-century dovecote lining the slow-moving River Arrow.

The area around Eardisland was settled as early as the Bronze age, as evidenced by several ancient earthworks. The Romans seem to have bypassed Eardisland - literally - as a Roman road forms the eastern boundary of Eardisland parish.

A settlement grew up during the Dark Ages and by the Norman Conquest of 1066, the manor was held by Morcar, the Earl of Northumbria. Morcar's connection is remembered today in the village name, which probably comes from 'Earl's Lene', the Earl being Morcar and Lene being the low-lying Arrow river valley. 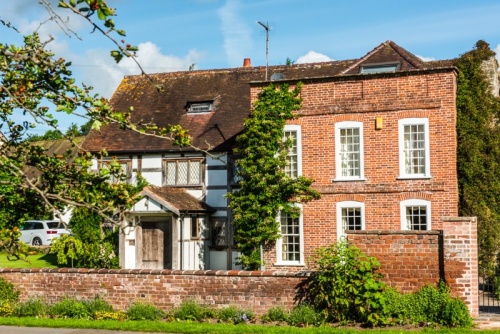 After his victory at the Battle of Hastings, William the Conqueror seized the estate for himself. His son, William II, granted Eardisland to William de Braose I, one of his most powerful barons.

The manor passed by marriage to the influential Mortimer family of Wigmore. The estate later passed again by marriage to Richard, Duke of York in the early 15th century. When the Duke was charged with treason his lands were forfeited to the Crown.

The Eardisland estates were held briefly by Catherine of Aragon, Henry VIII's first wife and later by her daughter, Mary I. From Mary the manor passed through a number of families including the powerful Devereux family, Earls of Essex, and later by the Kinnersley, Smythies, and Harding families. 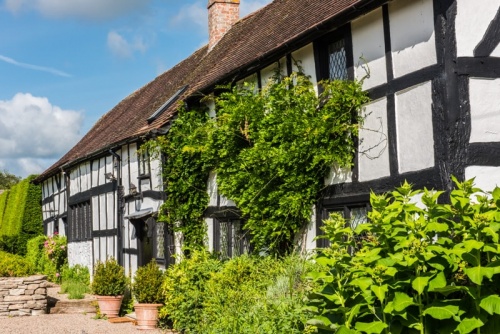 The old manor house of Eardisland is a pretty timber-framed building under a tile roof. It was built in the early 17th century with a brick extension later that century.

Across the road from the manor house is the most unusual historical structure in the village; an AA Kiosk built in 1920 and thought to be the oldest in existence. It originally stood at Legions Cross on the A44, just outside the village.

These distinctive black and yellow telephone boxes once dotted the British countryside. They were originally called sentry boxes and were intended as shelters for AA patrolmen. In the 1920s AA members were given keys so they could access the kiosk and the simple tools inside, such as maps and a lamp.

The kiosks were later fitted with telephones that would make a direct call to an AA operator. Each kiosk had a unique number so all the caller had to do was tell the operator the kiosk number and a patrol would be dispatched. In the days before mobile phones, it was a very efficient way to get motoring assistance.

The Kiosk stands beside the Cross Inn, a pretty 18th-century timber-framed building. 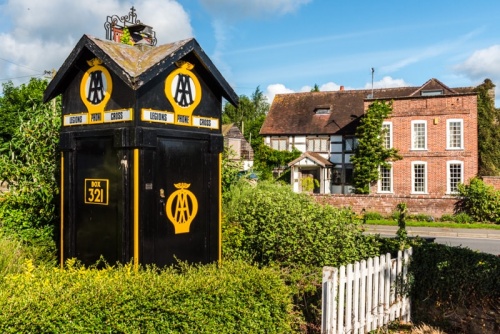 Just south of the village centre is Burton Court, a historic manor house originating in the 14th century and now operating as a luxury B&B and event centre.

This beautiful restored dovecote dates to the late 17th century and stands in a picturesque location on the banks of the River Arrow. Though the building we see today is just over 300 years old there is a record of a dovecote here since 1469.

The dovecote originally formed part of the Manor House estate. It was completely restored in 200 and now serves as a community-operated village shop and visitor centre, with an exhibition on the heritage of Eardisland and the surrounding area. The dovecote is run by the Eardisland Dovecote Trust, who also look after the AA Kiosk across the road and the free public car park it stands in. 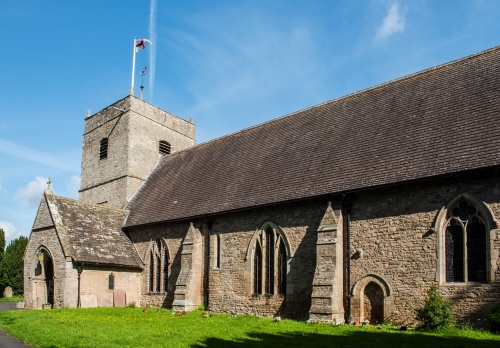 Eardisland's pretty parish church dates to the early 13th century, perhaps around the year 1200. The present nave was built then and formed the entire church. To this, a south porch was added in the early 14th century and a chancel and vestry around 1330. The west tower fell down in 1728 and was rebuilt later that century.

Historic highlights include a late 15th-century parclose screen, now under the tower, and a worn 14th-century grave slab commemorating Alice St Owen, who died around 1369. 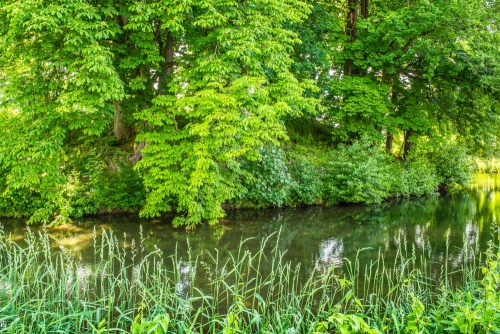 Forty yards north of the churchyard stands one of Eardisland's most intriguing historic sites; a moated castle mound thought to date to the Saxon period. If the date is accurate it could have been erected during the time when Earl Morcar of Northumbria owned the manor. There is no access to the castle mound, which is completely enclosed by the moat. You can get a reasonably good view of the motte from the end of St Mary's Walk, a cul-de-sac just north-west of the church.

Almost nothing is known about the history of the castle, but an intriguing hint comes from a document in 1213 instructing William de Cantelupe to 'arm the castle at Hordisland'.

It is also possible that the motte was a Welsh border castle erected after the coming of the Normans, possibly by the powerful De Braose family who held the manor in the early 13th century. A 17th-century writer records that 'there is on the north side of ye churchyard an old moated hall, was the seat of the Pembridges to have been'.

The castle mound is about 49 metres wide at the base and rises 10 feet above the moat. The level top is roughly 70 feet across. A causeway at the north-west corner once crossed the moat but this is now gone. The moat is fed by the River Arrow through a channel cut about 100m to the north. 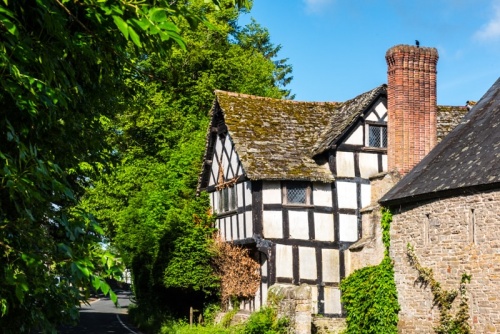 Of these, one of the oldest is Knapp House, a 14th-century timber-framed building on the main street. Though the house has been remodelled several times and some of the windows are modern, the core of the building is a medieval cruck-framed hall house, with a hall floor installed in the 17th century. At one end of the hall is a medieval fireplace.

On the north side of the River Arrow is Staick House, another 14th-century Grade II* listed building. Like Knapp House, Staick House is timber-framed and stands on a plinth of rubble stone. There is an east cross-wing built in the 14th century and extended in the 17th century and you can see a small pigeon loft under the gable.

Just opposite the Dovecote is Mill Stream Cottage, a picturesque small timber-framed cottage on an island in the river, beside the bridge. The house, now a holiday cottage, dates to the 17th century.

These are just a few of many, many beautiful historic buildings in Eardisland. It is well worth just strolling about, exploring the village and enjoying its sense of timeless beauty. 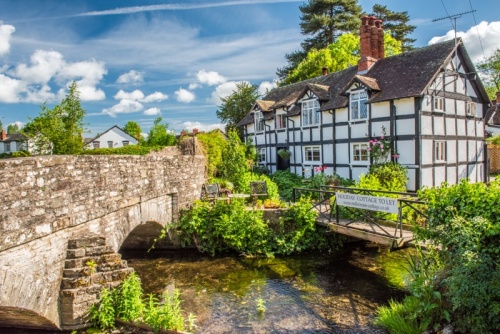 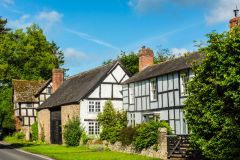 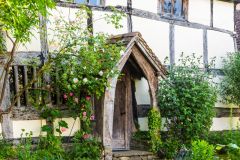 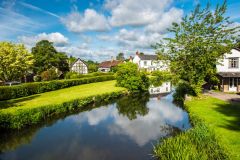 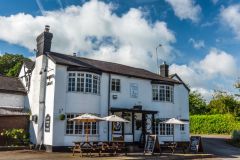 More self catering near Eardisland

More bed and breakfasts near Eardisland