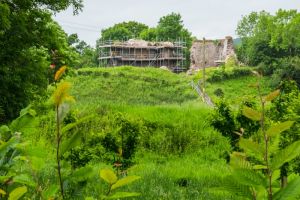 Clifford Castle
The gatehouse, hall, and round towers are all that remain of Clifford Castle, the traditional birthplace of "Fair Rosamund" Clifford, Henry II's mistress.

Around 1070 the Norman lord William Fitz Osbern built a traditional motte and bailey castle here on a natural hill above a ford across the River Wye. The location gives the site its name, from the words 'cliff' and 'ford'. The castle was intended to defend a new settlement established at the same time. Though it is a small village today, the Norman settlement at Clifford was planned to accommodate roughly 200 families, and it grew to become the third-largest in Herefordshire by the 14th century.

The location meant that annual flooding of the River Wye created a marshy area, or lake, around the base of the motte, adding a further layer of defence.

The Fitz Osbern family did not have long to enjoy their castle; William's heir Roger de Breteuil rebelled against the crown in 1075 and his lands were seized. The king granted it to the Tosny family, who rebuilt the castle in stone, sometime prior to 1162. That was when Walter de Clifford, Roger Tosny's steward, claimed ownership by simply refusing to give the castle back to his employer.

Clifford had a daughter named Rosamund, who may not have been born at Clifford Castle but was certainly raised here. Rosamund Clifford is known to history as Fair Rosamund, mistress of Henry II.

Clifford Castle had a part to play in their relationship. Walter de Clifford introduced his daughter to the king, hoping that the ever-wayward Henry would take her as his mistress. This the king did, and Rosamund's influence made certain that Walter's non-existent claim to Clifford Castle was never questioned.

According to which version of the legend you prefer, Rosamund was poisoned by Queen Eleanor in a fit of jealousy. We do know that Rosamund Clifford died and was buried at Godstow Abbey, on the outskirts of Oxford, in 1176-7. Her memory lives on at Clifford in a nearby dwelling called Rosamund House, though there is no real link between the house and castle.

Walter de Clifford III rebelled against Henry III in 1233, and the king led a force of soldiers to besiege the castle. The garrison surrendered after just a few days. De Clifford ended his dispute with the king and fought for the crown against his father-in-law Llywelyn ab Iorwerth. De Clifford was a volatile character and fell out again with the king. He famously forced a royal messenger to eat a message from the king, including a huge wax seal. For this act of spite De Clifford lost some of his powers as a Marcher Lord.

The castle was sacked and destroyed by Owain Glyndwr in 1402 and became a romantic hilltop ruin. Stone was robbed for nearby buildings throughout the village.

Clifford Castle has been undergoing a major stabilisation project with aid from Historic England. But there are now some days when it is open to the public.  On other days, it is easy to see the castle remains and the surrounding earthworks from the nearby road to Wyeside Farm. Just take the first left entering Clifford village from the south and park along the verge. You can see the castle clearly from the road and from the drive to Castle House.

More self catering near Clifford Castle >>

The Agent's House Bed And Breakfast - 1.9 miles
Hereford, Herefordshire
From: £70.00 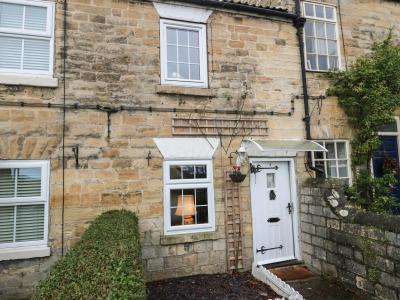 A mid-terrace cottage based in the village of Clifford in West Yorkshire, sleeping three people in two bedrooms.
Sleeps 3