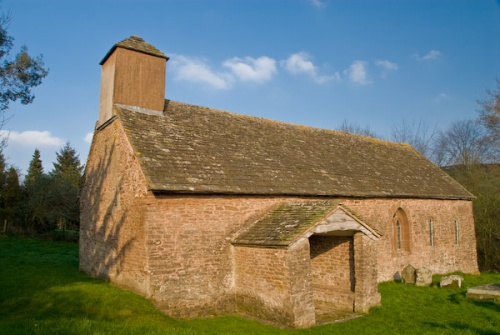 This delightful little church dates from the late 11th or early 12th century. It is located in an isolated field, far from any current village, about 5 miles west of Ross on Wye. It is a very simple building, composed of a nave and chancel, with the addition of a small south porch.

The north and west walls of the church probably date to the 12th century, with the east windows a century later, and the windows of the south wall added in the 14th century.

The interior of St Michaels, Michaelchurch, is notable for two things. First, and most immediately apparent on entry, is the painted decoration lining the south, east, and north walls. This is primarily red and white in colour, with geometric patterns and floral elements, and it dates from the 13th century. Superimposed on the medieval paintings are remnants of 16th and 17th-century black lettering, including the Ten Commandments.

The second, and more intriguing, treasure of St Michaels can be found in the blocked up north doorway. There, looking a bit like a tall toadstool, is a small Roman altar.

The altar has been variously dated to the 3rd and the 5th century. It may originally have been used as a wayside shrine. Upon the surface of the altar is a very worn inscription which reads EO TRI(VII) BECCICUS DONAVIT ARA(M), which loosely translates as 'To the god of the three ways (crossroads), Beccicus dedicates this altar.'

The story of the altar's provenance is an interesting one. In 1830 the Reverend John Webb, then rector of the parish, saw a rectangular stone with a hollow in the top outside a cottage in the village. The local doctor used the stone as a mortar to grind herbs and medicines.

The rector realized that the stone was a Roman altar stone. Intrigued, he looked further afield and discovered the stem and base of the altar in the blocked up north doorway of St Michael's church. The base and altar were moved to Tretire church but returned to Michaelchurch in 1908. In 1973 the church was given over to the Churches Conservation Trust. It is now used for only one service per year.