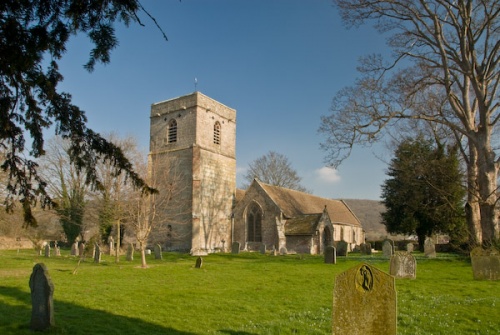 The story of the historic church of St Cuthbert at Holme Lacy is really the story of two families, the de Lacy's and the Scudamores.

This beautiful church lies in a lonely meadow near the slow-moving River Wye. The name gives a clue to its provenance; Holme Lacy translates as 'meadow belonging to the Lacy's'. Holme Lacy village existed at the time of the Domesday Book in 1086 when the land was owned by the Bishop of Hereford and rented by Roger de Laci.

Over the subsequent centuries, the de Lacy's and the Bishops of Hereford squabbled over the manor here. But the Lacy's were eventually ousted by the Scudamore family, who came here in 1419. The Scudamores rose to national importance, with Sir James Scudamore being immortalized in Spenser's Faerie Queen as the ideal of chivalry. The Scudamores of Holme Lacy finally dies out in 1909 and the estate passed through several hands before becoming a hotel.

The reason for the church's location is a bit of a mystery. It seems an odd choice of a building site, in a flood plain of the Wye; a place that is frequently subject to flooding. Modern Holme Lacy village is over a mile away up a long, winding track. It is possible that the original village lay much closer; it may have been moved when Holme Lacy House was rebuilt in the 17th century.

Whatever the reason, the church now seems like a forgotten relic, with only the former vicarage for company. The isolation of the church from the village helps explain why it was eventually abandoned and passed to the care of the Churches Conservation Trust in 1994. 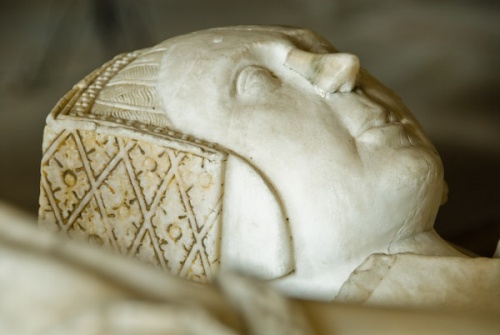 A curious tale of greed and thievery clings to St Cuthbert's church. It seems that in the Civil War one of the churchwardens was asked to hide the church plate, to prevent it from being seized by Parliamentary troops.

The churchwarden was unable to resist temptation, and rather than hiding it, he fled to France with his booty. According to Scudamore family papers, the thief regretted his deed and died in squalor and misery in exile.

The church as it stands today is largely 13th and 14th-century work, with the addition of a 16th century north transept and south porch. There is a solid 14th-century tower, rising in three stages at the west end of the church. Before the south porch is a much-restored cross, believed to date to the 14th century.

The most immediately noticeable feature of the church is that the nave and the south aisle are almost identical in size, creating a sense of great height and space. This is emphasized by the fact that the interior is very sparsely furnished. Fragments of original 14th-century stained glass still remain, notably in the chancel.

There are four large painted hatchments of the Scudamore and Norfolk families. These hatchments are like large coats of arms and originally hung outside a family home when one of the members died, before being moved to the church and a permanent memorial.

There is much Victorian and early 20th-century restoration work in the interior, but the most compelling feature is the striking Scudamore family tombs in the south chapel and chancel. These are quite varied, ranging from the late 16th century to early 20th century.

The most striking is the alabaster effigies of John and Sibill Scudamore, which date to the late 16th century. Sir John is clad in armour, his feet on a lion, while Lady Sibill is depicted in a plain gown with beautifully embroidered sleeves. A decorative pomander on a slender chain is shown lying on top of her gown. The workmanship of the effigies is quite wonderful.

Nearby, set against the north wall of the chancel, is a grandiose marble monument to James Scudamore (d. 1688). The carving may be by Grinling Gibbons; certainly, it is in his style. Sir James is depicted in Roman costume, his elbow resting on a cushion - rather as if he has just been indulging in a Roman feast. On the south side of the south aisle are a set of medieval choir stalls, featuring some lovely misericords.

St Cuthbert's Church in Holme Lacy is a beautifully peaceful historic building in a secluded countryside setting and is well worth a visit.