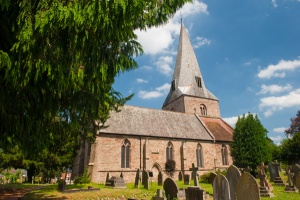 One of the longest churches in Herefordshire, stretching almost 120 feet in length, St Mary's is built around a 12th-century central tower, with a later 15th century shingled spire. The east end of the nave is also 12th century, with a south aisle added in the 13th century and an early 14th century chancel and south chapel.

The exterior features considerable Romanesque carving detail around the windows and angles of the tower. The Norman choir arch and Early English tower arches also show lovely carving detail in the capitals and column bases. There is evidence of an underground passage between the tower and the nearby Stone House, used by priests.

The church was probably founded when the Abbey of Lyre had the patronage. The powerful Chandos family became patrons of the living in 1300 and they extended the church and built the chancel.

St Mary's is famous for its superb 12th-century tympanum, probably the work of the Herefordshire School of craftsmen who produced the remarkable carvings at Kilpeck and Shobdon.

The tympanum is thought to have been carved around 1140, but we do not know which doorway it originally graced; it was built into the exterior west wall in the Victorian period, then later moved inside to preserve the carvings. It is now set against the west wall of the nave, directly beneath a large window (which makes it much harder to see the carvings clearly due to light coming through the window!). 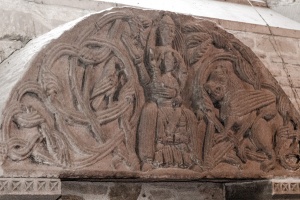 The carvings have traditionally been interpreted as depicting a Virgin and Child, flanked by figures of a bird and winged lion, intertwined with vines and foliage. The lion and bird presumably refer to the saints Mark and John, and the bird, in particular, appears in most of the works associated with the Herefordshire School of carvers; it is almost a 'signature' carving.

I say 'traditionally interpreted' as there is an alternative theory that the carvings may be part of a larger Trinity scene, with a missing dove representing the Holy Spirit on an arch keystone or voussoir over the tympanum.

There are several unusual features in the carvings; the seated Virgin is somewhat masculine in character and has her hand raised in benediction, something rarely depicted. Also, she is shown with a cruciform halo, a symbol usually reserved for depictions of Christ or God the Father. So is it indeed a Virgin and Child? Well, it is fun to speculate, but until we have more evidence, then speculate is all we can do. 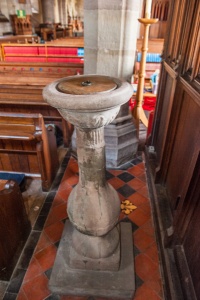 A tale of two fonts

St Mary's has two fonts, and both suffered the indignity of being lost for years, then rediscovered and returned to the church. The oldest dates from the 16th century and is decorated with very nice fleur-de-lys carvings. It was found in nearby ruins in 1858.

The younger, more elegant neo-classical baluster font dates to the 17th century Restoration period and was found in the vicarage garden. It probably stood in the church porch, so that children could be baptised in the porch before entering the church as a full-fledged member of the congregation.

Near the font is an ancient wooden chest, carved from a single piece of oak, and dated to around 1325. The chest measures 9 feet long, weighs almost half a tonne and was for many years hidden in the belfry. Which raises an interesting question; how on earth did the parishioners of Fownhope get this huge chest up to the belfry in the first place, and why?

One theory is that it was hidden during the Civil War, to keep the church plate safe. Nothing was ever found within the chest, but a local record suggests that a pair of silver candlesticks were stored there and these were later moved to East Shere Priory.

By the blocked south doorway is a grave slab to John Sherman (d. 1490), the last priest appointed by the Abbot of Lyre. The chancel has several recesses in the walls which are thought to have been used by members of the Chandos family, but there are no effigies remaining to support this theory.

Above one of the recesses is a touching memorial to John Lachmore of Fanhope Court, who died in 1711. The inscription tells us that he had 2 sons, the youngest of whom was born 3 days after the father died and is buried with him (so presumably the child was stillborn or died shortly after birth).

Outside in the churchyard stands a Norman cross, restored as a WWI memorial. Just outside the churchyard wall are medieval stocks, probably dating to the 14th century. 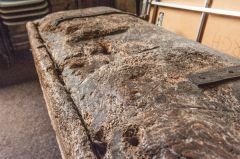 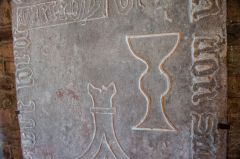 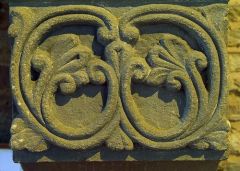 More self catering near Fownhope

More bed and breakfasts near Fownhope