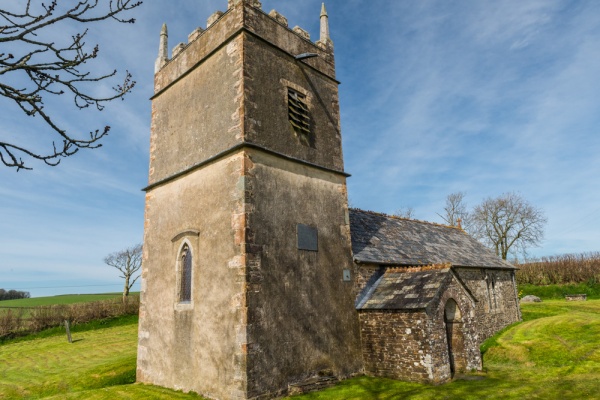 In a lonely location overlooking the Tamar Valley, on the border of Devon and Cornwall, Luffincott church has only a nearby farmhouse for company. The body of the church dates to the medieval period, with a striking west tower dating to 1791.

One feature rarely seen in country churches are a set of Georgian sash windows in the north wall, which would appear to be have been made for domestic use. The interior features a barrel-vaulted roof and a 14th-century font.

The church is no longer used for regular worship - as you might expect, given its isolated location - and is now in the care of the Churches Conservation Trust.

I had a welcoming committee when I arrived in the farmyard at Luffincott; a pair of farm dogs were quite keen to make my acquaintance, at high volume. When I wandered away from the farmyard to the nearby church they lost interest and left me to my own devices.

When they left the isolation of the location really sunk in; Luffincott church feels like it is lost in a time warp, left alone by the world at large. One one side are farm buildings, on the other side fields stretch away in all directions.

The most striking feature of the church is the sturdy west tower, which seems almost too large for the body of the church. St James is a very simple rural church, and the building has very little in the way of decorative carving or any other embellishment. The neat churchyard has a small collection of gravestones, many of them former vicars of the parish.

To one side of the south door is a plain octagonal font on a pedestal shaft. The interior is extremely simple, with a long, narrow nave giving way to a chancel of the same width. The nave and chancel are spanned by a single barrel-vaulted roof decorated with wooden bosses. There are no wall monuments, but set into the central aisle are several 16th - 18th-century grave slabs with worn but legible carving. I could make out the date 1587 on one of the slabs.

On the south wall is a memorial window to the Lippincott family of Philadelphia, USA, formerly of Luffincott. The simple wooden communion table stands beneath a late medieval window with beautiful tracery. The window contrasts strongly with the rather odd-looking Georgian sash windows set into the north wall. These windows are so unusual in a church that I did a double-take when I first saw them, not sure if my eyes were deceiving me or not.

It will not take long to explore the church; indeed it will take longer to find Luffincott in the first place! Having said that, the location is wonderful, and my abiding impression is one of timeless peace (except for the dogs, who were really quite noisily friendly). 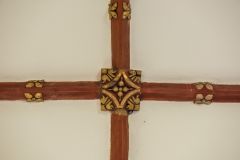