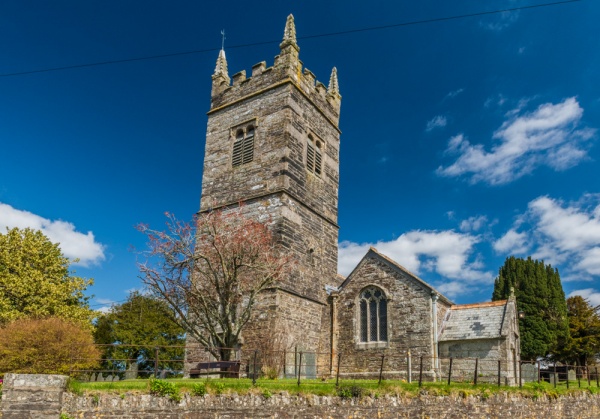 The village of Egloskerry lies about five miles north-west of Launceston. The village name means 'Church of Keri', a reference to St Keria, one of the 24 children of King Brychan of Brecknockshire in Wales. Other saintly children of Brychan include St Nectan and St Petroc, or Petrock.

The parish church was originally dedicated to St Ide and St Lydy but in 1509 it was re-dedicated to St Keri and St Petrock. The attractive church is composed of a nave, chancel, north transept, south aisle and porch, and a west tower.

The church is thought to have been built by William Boterell of Penheale in the early 12th century. A descendant, also named William, gave the church to Launceston Priory in 1195, and the Augustinian canons of Launceston led the services at Egloskerry, or in some cases appointed a chaplain in their stead. For this reason there is no record of a medieval rector or vicar at Egloskerry. 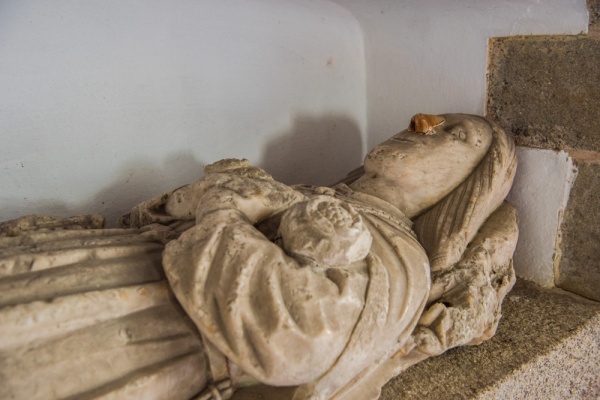 The church interior suffers somewhat from an over-enthusiastic Victorian restoration, but thankfully the restoration left behind much of historic value, including a fascinating tympanum over the blocked north door, decorated with a carving of a serpent biting its own tail.

Over the south doorway is a reset Norman tympanum depicting the Agnus Dei, or Lamb of God, the symbol of St John the Baptist. The tympanum was discovered concealed in the south wall of the aisle during the Victorian restoration. It seems likely that it was hidden during the Reformation, when the symbol was deemed too Catholic for use.

In the south porch is a grave slab to John Sarne (d. 1624). The gravestone is inscribed with a fascinating epitaph in verse, extolling Sarne's virtues. It includes the following phrase:

'He injured none, his heart was fixt above.
But though his corps with worms be turned to mould
His soul with angels doth God's face behold'.

The font is of Norman date, and there is a pillar piscina from the same period.

The most interesting memorial is an alabaster tomb thought to be that of Edward Hastings, Lord of Penheale (d. 1510). Atop the tomb is an effigy of a man wearing civilian robes, with rosettes on his chest. The tomb originally stood in the north transept, built as a family chantry by the Hastings of Penheale. It may have been made for Launceston Priory and brought to Egloskerry after the Priory was suppressed by Henry VIII. 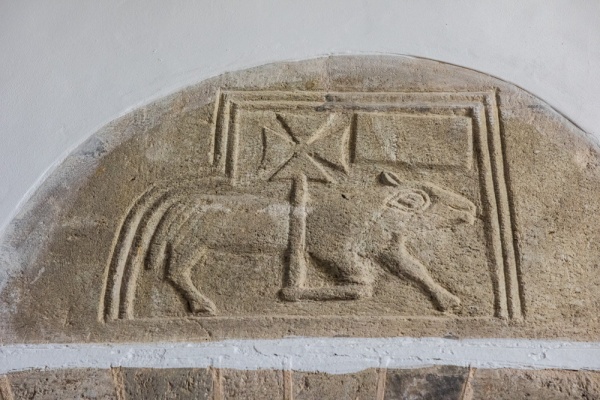 Early Norman tympanum of the Agnus Dei over the south doorway

To the left of the altar is a grave slab to Grace Speccot, who died in 1636. The epitaph is in the form of an acrostic, with the first letter of each line speling out her name and initial:

'G ...o peaceful sainte, go accept rest,
R ...etyrd betime, Heaven calls the best
A ...way to make its harmony
C ...omplete; what angry Deity
E ...re we could patterne take of thee,
S ...natch from us both the branche and tree'

Also, notice the phrase in the first line, 'go accept rest', which is an anagram of 'Grace Speccot'.

In the Penheale transept hangs a funeral helmet and gauntlets dated 1620, belonging to Grace Speccot's father Sir John. Though the helmet is 17th century it was adapted for ceremonial use as a funeral helm in the early 18th century. If you look closely you can see that the helm shows marks of battle damage, perhaps in the Thirty Years War or much later, in the Civil War, when Sir John's son, Paul Speccot is known to have taken part in the conflict.

There are fragments of medieval glass depicting the Trinity, and a 1620 panel painted with symbols of Ireland, Scotland, and England, as well as the feathers used by the Prince of Wales. the window is thought to be connected to the Grenvilles family, owners of Penheale after the Hastings.

Egloskerry church is a delight to visit, full of historic interest and set in a beautiful rural village location. The church is normally open daylight hours to visitors and was open when we visited. 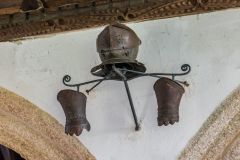 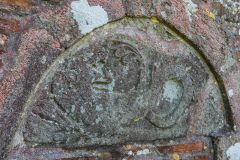 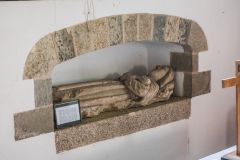