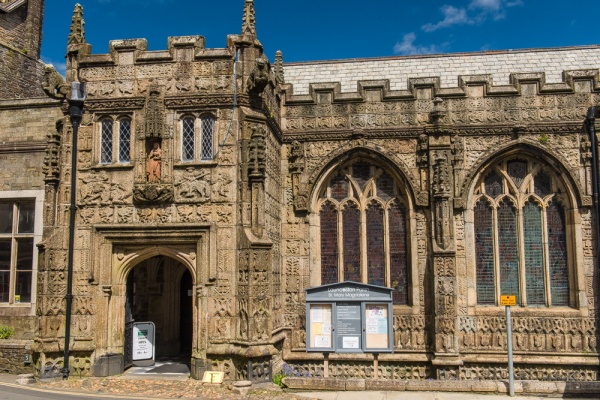 St Mary Magdalene in Launceston is the most impressive and beautiful late medieval church in Cornwall, featuring superb carved detail on the exterior and a wealth of historic memorials and woodwork inside.

In 1353 Edward, the Black Prince, was named Duke of Cornwall. Around 1370 Edward built a chapel a short distance from Launceston Castle. All that remains of that 14th-century chapel is the imposing west tower of St Mary Magdalene church, built of Polyphant stone, 20 feet square at the base and rising 70 feet to an embattled top.

The tower was originally used as a watchtower, with a single bell to warn of attack, not to call worshippers to service. There is now a ring of six bells, all bearing the date 1720. 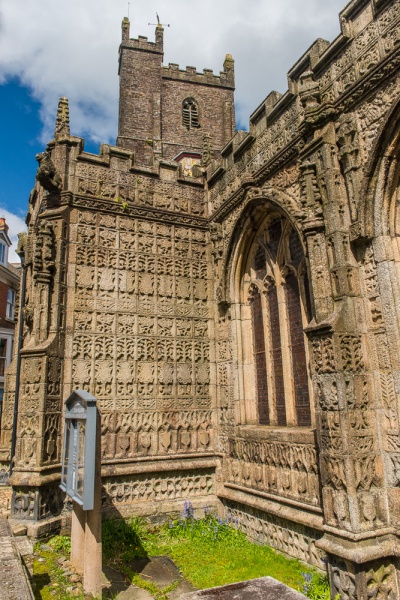 The ground floor of the tower was used as a cattle market, and you can still see the iron rings used to tether cattle, affixed to the tower wall.

The tower was later used as a weighing station by the town corporation, who kept a weighing engine (a rather grand set of scales) for weighing wool and yarn on the ground floor. Goods were weighed to assess a tax, which was used to pay the church rector.

Documents from 1431 show that the earliest known clock in Cornwall was fixed to the tower, facing Castle Street. The heavy iron mechanism had just one hand, and a single dial. The clock hand was regulated with a set of very heavy weights. Apparently the weights were also dangerous, for in 1654 a man named Julian Gliddon 'was slain with apease [a piece] of the great clock'. 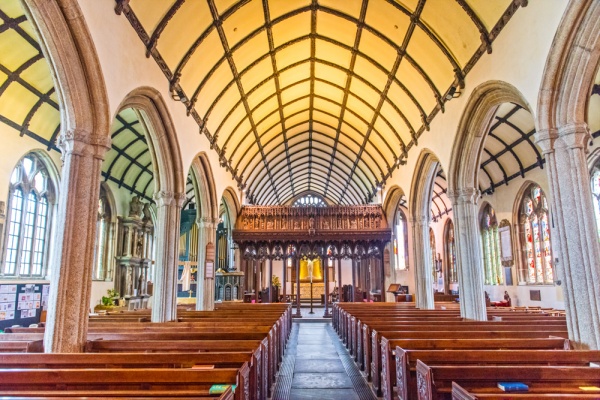 Apparently the weighing station was used without permission by famers weighing pigs and cattle. Records show that a saddler called Owen Stowel kept hens and barrels of hogwash in the tower 'and doth not rid away the rubble, even by the Church, which is annoyance to all them that go to hear God's service.'

The weighing station was moved to a new Market House in 1842. The house stood on the site now occupied by the war memorial. The weights, scales, and beam used in the weighing station can be seen in the Lawrence House Museum, a few minutes walk from the church.

From at least the 15th century the church maintained a musical group known as 'The Minstrels of St Mary's'. They were not minstrels in the sense of wandering musicians, but an early version of a church choir. The Minstrels would accompany the mayor to Southgate, where they would welcome important guests with a musical greeting. 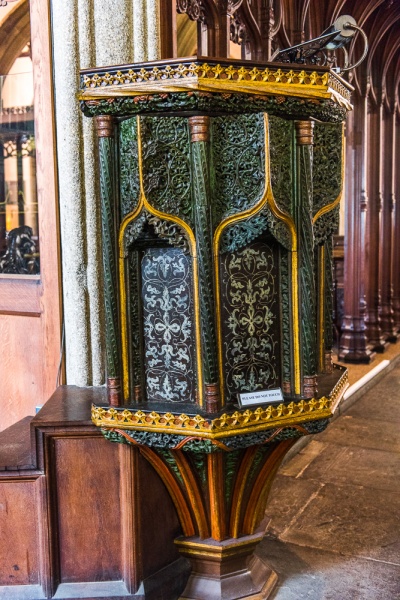 The singing of the Minstrels had one unusual consequence; in 1440 Bishop Edmund Lucy arrived to hear the sounds of beautiful music as he walked up the steep hill towards the church. He famously proclaimed that 'Surely 'tis the angels singing'. The Bishop granted an indulgence to anyone who gave funds to support the Minstrels, and the street where he had heard the singing was immediately renamed Angel Hill. Even today the Minstrels greet visiting church leaders and 'sing them up' Angel Hill.

The chapel built by the Black Prince was in poor condition by the late 15th century. It was rebuilt by the generosity of Henry Trecarrell of Lezant. The story goes that Trecarrell intended to use his money to rebuild his family home in Lezant, and had already had granite blocks quarried and cut. When his infant son died tragically in a bath he changed his mind and gave the building stone to the church.

The new church was begun in 1511 and construction continued for 13 years. It seems as though plans were never completed, for the old west tower is out of alignment with the body of the church, suggesting that Trecarrell planned to tear it down and build a new tower.

The space between the tower and the church was left empty for a time. In 1851 the Duke of Northumberland joined the tower and church with a new building called The Mayoralty Room, which acted as a council chamber until 1881. It then became the choir vestry. 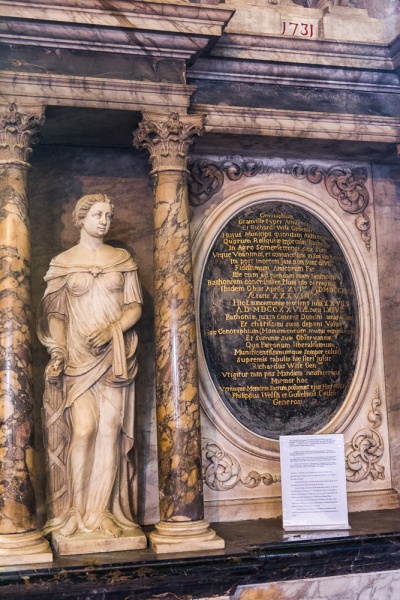 The church may not have been finished to Trecarrell's vision, but what he created will live long in the memory The highlight is stunning carved detail on the exterior walls of the church. The carving is exquisitely complex, like patterns of lace executed in stone. On the south porch are figures of St George and the Dragon, and St Martin sharing his coat with a beggar.

Small figures of Henry Trecarrell and his wife can be seen beside the south porch. Look for the pomegranate emblem of Queen Catherine of Aragon and the arms of Henry VIII.

On the east wall you can see the carved figure of St Mary Magdalene 'creeping to the cross', her ointment pot beside her. A long-standing local tradition says that if you toss a pebble over your shoulder and it comes to rest on her back you will have good luck.

The carved granite facade is unequalled in England, and is an extraordinary piece of late medieval craftsmanship.

The church saw vicarious action during the Civil War; in 1643 Cornwall's Royalist army made their headquarters in Launceston. The army leaders were attending service at St Mary's when news came that a Parliamentary force was advancing. They finished the service, then arrayed their troops on Windmill Hill, where they were successful in repelling the Parliamentary attack. In the vestry is a large board painted with Charles I's Declaration of September 1643, thanking the people of Cornwall for their support.

One of the Royalists was Sir High Piper. He survived the war, and died in 1687. His elaborate memorial stood in the north aisle, but it collapsed in the 1930s. Luckily the effigies and inscription were saved and these have been placed near the south door.

Another good memorial, dated 1731, to a pair of friends, Granville Piper and Richard Wise, who were both Mayors of Launceston, and who both served as Mayors of Launceston. On the south wall is a plaque to Henry Lawrence, a physician whose nearby residence on Castle Street is now the Lawrence House Museum.

The extraordinary wineglass pulpit dates to the 16th century, or perhaps even earlier, but it was comprehensively restored in 1971. On the west wall is an exceptional gilded royal coat of arms to George I.

Artist JMW Turner made several sketches of the church and castle during a visit to Launceston in 1814. The sketches are held at the Tate Gallery in London.

The church is usually open daily and was open when we visited. It is a very short walk from the castle and the town centre parking area, both of which are well-signposted from major roads leading into Launceston. 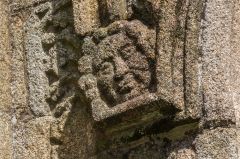 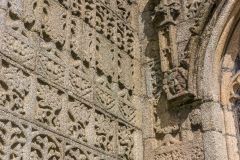 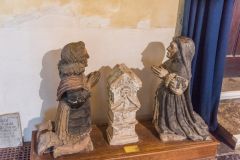 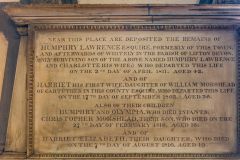 Self Catering near Launceston