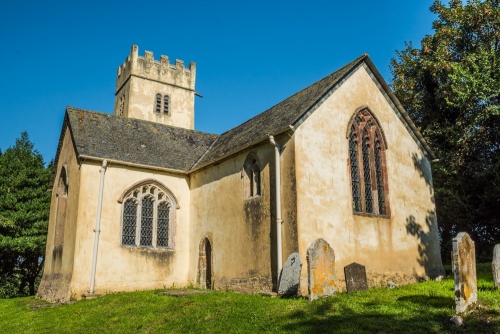 An intriguing medieval church beside the late 18th-century manor of West Ogwell House (now the Gaia House retreat centre), West Ogwell Church stands in a remote setting, reached only by narrow, winding lanes. The core of this cruciform church was built around 1300, with the addition of a two-tiered west tower a century later.

The church is composed of a nave, chancel, north and south transepts, south porch, and the west tower which we've already mentioned. The interior is a surprise; with Georgian decoration throughout. Georgian features include a set of elegant communion rails, box pews, and tiered benches.

There are some older features remaining, however, including a Jacobean pulpit, 13th-century triple sedilia in the sanctuary, and a medieval timber-framed roof.

The unusual royal coat of arms is worth mentioning. For a start, it hangs in the south transept, which is rare. At the top of the painted rectangular panel, where you would expect to find the reigning monarch's name, you see instead 'Robert Silly, Churchwarden'. The text is so large that it seems to dominate the coat of arms beneath it. 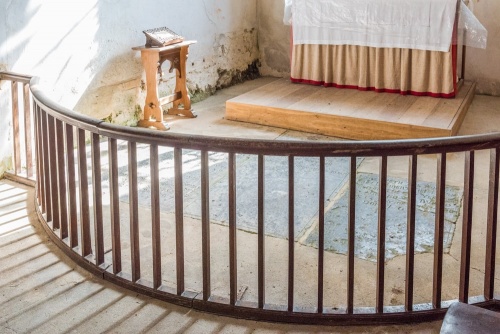 Another oddity is that the date 'December 19th 1832' is painted beneath the coat of arms. It is very rare to see the precise date and month as well as the year.

Also in the south transept is a fireplace, suggesting that the transept was used as a private seating area by the lord of the manor, who wanted to ensure his family's comfort on cold winter days.

There are few memorials of note, but we did find a grave slab set into the floor commemorating Judith Credeford, who died in 1672. On the wall is a simple monument to Rev Henry Taylor (1791-1861).

To my eye, the best interior feature is the striking set of communion rails, which curve across the chancel in a semi-circle.

In the churchyard is a memorial to members of the Convent of the Companions of Jesus the Good Shepherd (CJGS), who occupied West Ogwell House after the end of World War Two.

West Ogwell church is in the care of the Churches Conservation Trust and is generally open daily. 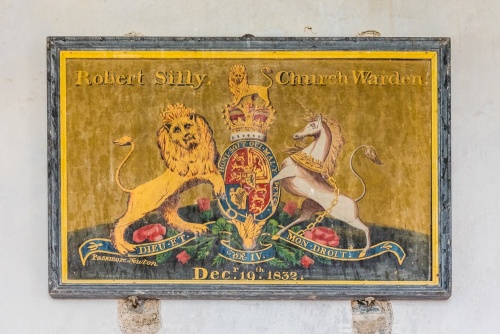 The unusual royal coat of arms

You have to be determined to reach West Ogwell; the hamlet - really, it is too small to be called a village - lies amid a myriad of narrow lanes, the sort of country lanes that have you praying that you don't meet a motorist coming towards you as you creep around yet another blind corner, with tall hedges on both sides.

Yet those who do make the effort to reach West Ogwell are rewarded with a delightful country church in a picturesque rural location, almost under the shadow of the neighbouring manor house. There is no dedicated parking area, but we found it easy to pull onto the grassy area in front of the churchyard gates, just off the manor house drive. 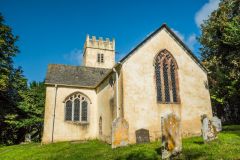 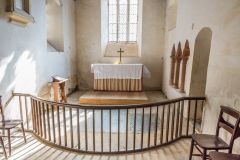 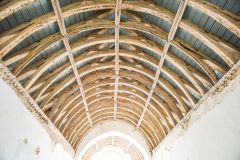