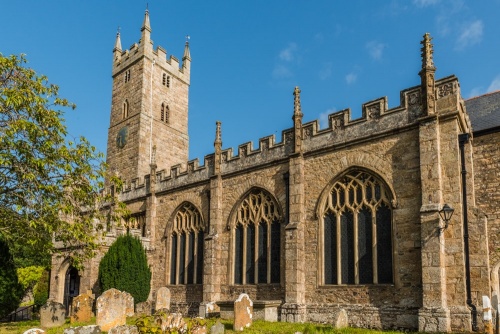 At the highest point in the historic Devon town of Bovey Tracey stands the medieval parish church of St Peter, St Paul, and St Thomas of Canterbury (PPT for short). A church has been present on this hilltop site since at least the 10th century. The original Saxon building was destroyed by Viking raiders around AD 1000.

The dedication to St Thomas of Canterbury is interesting, because it is suggested that the present church was built by Sir Henry de Tracy (who later became the first lord of the manor of Bovey Tracey) in penance for the sins of his relative Sir William de Tracy, one of the four knights who murdered Thomas Becket in Canterbury Cathedral. Becket, of course, was later canonised as St Thomas of Canterbury.

The only trouble with the story is that there does not seem to be any evidence to support it, nor is there any evidence that the two Tracy knights were related. 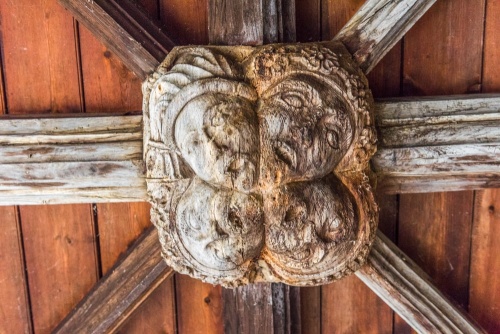 An unusual four-headed boss in the porch

The church fell into decay in the 14th century, through a combination of the Black Death and the ongoing wars with France. As a result, only the tower remains of the 13th-century building.

The church was restored under the incumbency of the Hon. Charles Leslie Courtenay, son of the Earl of Devon. Courtenay married one of Queen Victoria's Maids of Honour and was directly appointed to his post by the Queen.

Some of Courtenay's work was undone during WWII when a land mine fell in a nearby field. The force of the explosion destroyed the east window. Another wartime reminder is the War Memorial window in the south wall. This was given by the parishioners to the fallen of WWI. Each diamond pane depicts the initials, date of death, and service badge of each man who fell in the conflict. 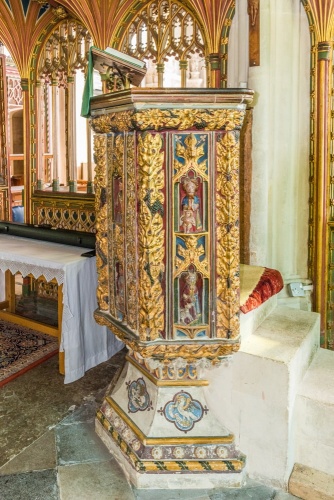 The exquisite painted and gilded pulpit

You enter the church through the 15th century south porch, restored in 1660 at the Restoration of the Monarchy. The porch vaulting has some very nicely carved bosses depicting a pope, a bishop, a nobleman and a king, but the most interesting bosses are a pair of Green Men.

Inside the south door is a 15th-century octagonal font given by Lady Margaret Beaufort, Countess of Richmond and Derby and the mother of King Henry VII. Lady Margaret was one of the most powerful and wealthy landowners in the country. She also donated the beautifully carved screen and pulpit.

The screen extends the full width of the original medieval church. The painted decoration dates to the early 16th century, with figures of the apostles and prophets. The parclose screens are 16th century. The pulpit is richly carved, with figures of the four evangelists, St Peter, St Edward the Confessor, St George and St Margaret of Antioch under ornate canopies. 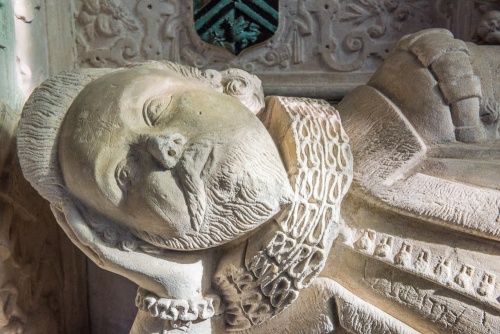 In the sanctuary is the tomb of Nicholas Eveleigh, the Steward of the Devon Stannaries. Eveleigh tragically died when the roof of the Stannary Court House in Chagford collapsed while he was inside the building, killing ten people. The monument was erected by his wife Alice Bray. On the north side of the sanctuary is a memorial to Elizaeus Hele of the Inner Temple in London, Alice Bray's second husband.

In the chancel are three misericords (mercy seats), given by Lady Margaret Beaufort. These are thought to be the earliest misericords in Devon. One carving depicts a man with a forked beard, flanked by inverted bird heads. The second seat is carved with an ornate foliage design, again with inverted bird heads flanking the central carving.

The final misericord depicts a fox making off with a goose. This is flanked by a pair of inverted cock's heads. The exact date of the carving is unknown but it must be contemporary with the font, screen, and pulpit. 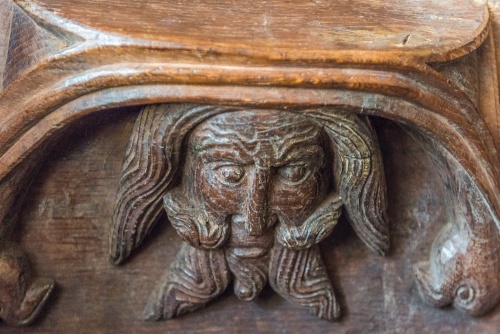 Misericord of a bearded man

In 1628 Charles I appointed James Forbes to be the vicar of Chagford. Forbes was ejected from the living during Cromwell's Commonwealth. He lived long enough to be reinstalled when Charles II regained the throne in 1660. To celebrate his return to the post, Forbes had an ornate royal coat of arms made as part of the screen under the tower arch. Look for a black rose on the flank of the lion, in remembrance of Charles I.

Rev Forbes made sure that everyone knew his feelings about Cromwell and the Commonwealth; he had boards painted condemning Cromwell's government in strong terms. One side of the west screen bears the words, 'Wm Laud arch: B: cant: (Archbishop of Canterbury) beheaded by the bloody Parliament 1642: every high priest taken from among men is ordaind for man in things pertaining to God.' On the right is painted, 'Jos Hall B: of Exon imprisoned by that wicked Parliament 1642. If a man desire the office of a Bishop he desireth a good work'.

Nearby on the west wall is a framed copy of 15th-century wall paintings discovered during restoration work in 1858. 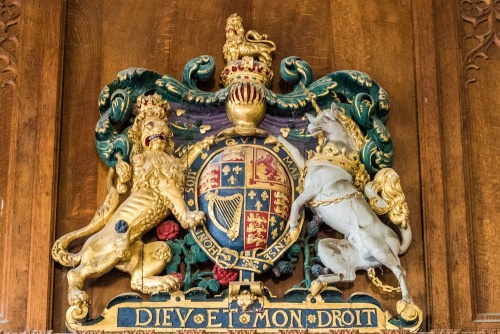 The Royal Coat of Arms with a black rose

At the east end of the nave is a traditional brass eagle lectern crafted in the 15th century. The lectern has an unusual feature; if you insert a penny in the eagle's beak it will pass through the brass sculpture and fall out by the bird's tail. This was used for the annual Peter's Pence ceremony. Peter's Pence was a tax levied for maintaining the Holy See in Rome. It was collected at every English church until it was outlawed by Henry VIII in 1534.

The lectern is thought to have survived the Civil War due to the action of Rev James Forbes (see above) who hid it underwater in a nearby pond during the conflict.

Our family couldn't resist seeing if we could put a penny in the eagle's mouth and retrieve it from the bird's tail. It took several attempts, because the eagle's beak slopes up, so we had to balance the penny on the beak and give it a good flick upwards, but it eventually passed through the eagle and shot out of the tail! 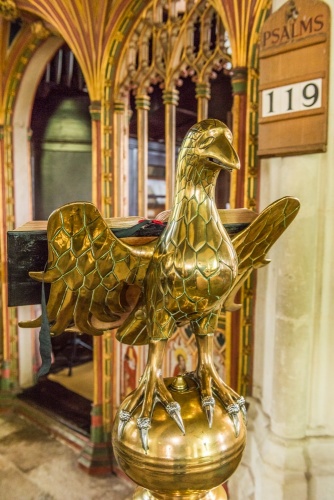 In the churchyard is a medieval cross shaft incorporated into a 19th-century memorial. Set into a wall across Trough Lane from the church is a holy well dedicated to St Mary.

Bovey Tracey's parish church is a delight to visit. The medieval screen is stunning, and there are so many outstanding historical features to enjoy. The church is usually open daylight hours and was open when we visited. 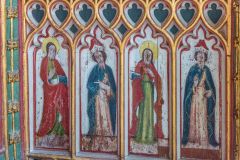 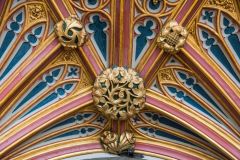 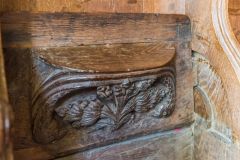 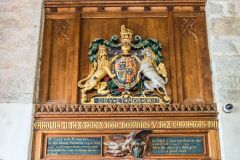 Self Catering near Bovey Tracey