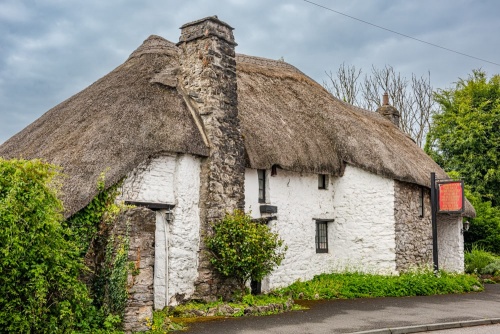 Standing on Market Street (the A379) in the pretty Devon village of Yealmpton is a picturesque Tudor thatched cottage that was once the residence of Old Mother Hubbard of nursery rhyme fame. It is now used as a restaurant and takeaway.

Architecturally speaking, Old Mother Hubbard's Cottage is a 16th-century hall house, once divided into two cottages but now one building. The interior was originally one large chamber open to the roof, but a floor was inserted at a later date. It is built of stone rubble, painted white, under a thatched roof.

The building is divided into three rooms with a hall in the centre and two cross passages. To the left is a projecting stair turret. 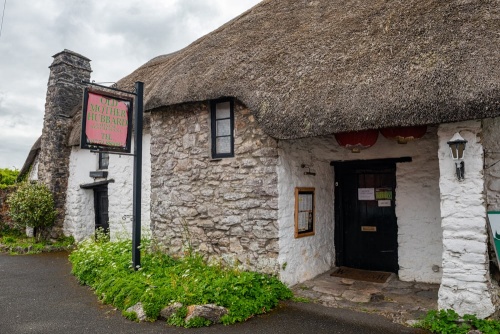 Who Was Old Mother Hubbard

The real-life character that inspired the popular nursery rhyme was the housekeeper at Kitley House, three miles to the west. The rhyme was written by Sarah Catherine Martin (1768-1826) and published in 1805. Martin, who was visiting Kitley House as a guest of the owner and her future brother-in-law, John Pollexfen Bastard, also drew the illustrations for the first edition, entitled 'The Comic Adventures of Old Mother Hubbard and her Dog'.

The story goes that Martin's endless chatter was irritating her host, so he told her to go away and write one of her silly poems. The result was one of the most enduring rhymes in the English language.

The character of Mother Hubbard, however, goes back centuries earlier to a satyrical poem by Edmund Spenser, author of 'The Faerie Queene'. In Spenser's poem, 'Mother Hubberd' is the narrator, rather than the subject of the poem. 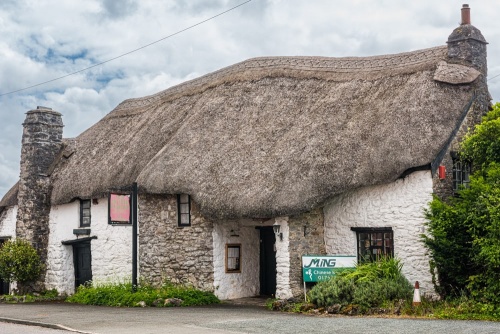 The cottage from the west

Sarah Martin drew heavily on existing poems, such as 'Old Dame Trot and her Comical Cat'.

Whatever the inspiration, Old Mother Hubbard became exceptionally popular and occurred, with variations, in countless editions over the following centuries. It was translated into numerous languages and used as the basis for pantomimes and political satires.

Old Mother Hubbard's Cottage is, as mentioned, now used as a restaurant. It stands on the A379 (Market Street) in the centre of Yealmpton, just east of the post office. There is no dedicated parking, but we found it very easy to find parking on a nearby side street.

It is worth taking some time to explore Yealmpton, which boasts several attractive thatched cottages and a beautiful medieval parish church.

Note: I've seen incorrect online references to the 'fact' that the Old Mother Hubbard nursery rhyme was written in the cottage. To the best of my knowledge, this is untrue; it seems highly unlikely that Sarah Martin, a well-known socialite and one-time lover of the Prince Regent (later King William IV) would have set foot in a lowly thatched cottage.

The Sportsmans Inn And Ivybridge Hotel - 4.4 miles
Ivybridge, Devon
From: £35.00