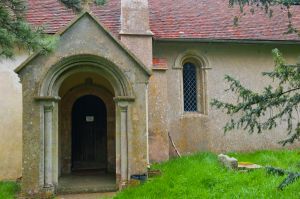 An isolated 12th-century church with much Victorian restoration. The oldest parts of St Margaret's Church are the south door and the font, both of Norman date. The building consists of a nave, small chancel, very small south porch, north vestry, and a stone bell turret at the west end.

The nave roof is early 17th century, and the date 1607 is carved on several roof timbers. The interior is very simple, with farmyard cartwheels used to create chandeliers. There is a blocked-up door on the north wall which appears to also be 12th century in date.

It is not easy to find St Margaret's. For a start, the postcode (on our satnav at least) takes you to West Ilsley, the next village to the north. Follow the road south towards Catmore, and be prepared, because there's not much to Catmore beyond a few farm buildings.

The stubby bell turret of the church is visible among trees beside a farmhouse. You'll have to park on the verge and walk up the farm driveway to the churchyard gate. The church is usually open - not too surprising, as I don't suppose they get too many visitors! It's a quiet spot, in idyllic Berkshire countryside.

The churchyard was somewhat overgrown when we visited, but the church itself looks cared for. In truth, there is not a lot to see - and that's part of the charm at Catmore; its a simple, country church, of a sort that once covered the country from tip to toe. The simplicity of the church, its furnishings, and its setting, is part of what makes it so appealing.

St Margaret's is no longer used for regular worship and is in the care of the Churches Conservation Trust. 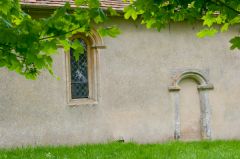 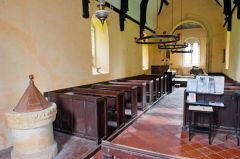 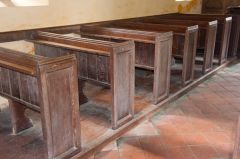 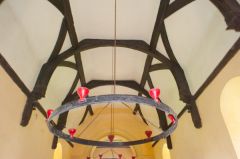