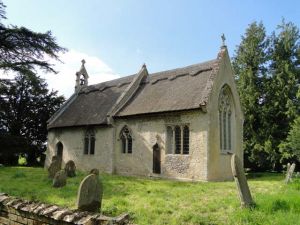 Barton Bendish, St Mary's church
A lovely little thatched church in a rural setting some distance from its village, St Mary's dates primarily to the 14th century. Historically there were three churches in the parish; All Saints was destroyed in the 18th century, St Andrews serves as the parish church, and this, St Mary's is redundant, and cared for by the Churches Conservation Trust.

One look at the building and you realize that the nave is actually smaller than the chancel. This oddity is explained by the fact that the west tower collapsed in the 18th century, at which point the nave was considerably shortened.

The best feature of the church is the Norman west door, which architectural historian Nickolaus Pevsner called one of the finest in England. The door is not original to St Mary's; it came from All Saints church, also in Barton Bendish parish, when that latter church was demolished around 1780. The door was needed to help repair the nave at St Mary's following the collapse of the tower.

The interior boasts a 14th-century wall painting which may represent St Catherine - the painting shows a wheel with eight spokes and the figure of a woman, so St Catherine is the obvious guess to make. There is a mix of 17th and 18th-century wooden pews.