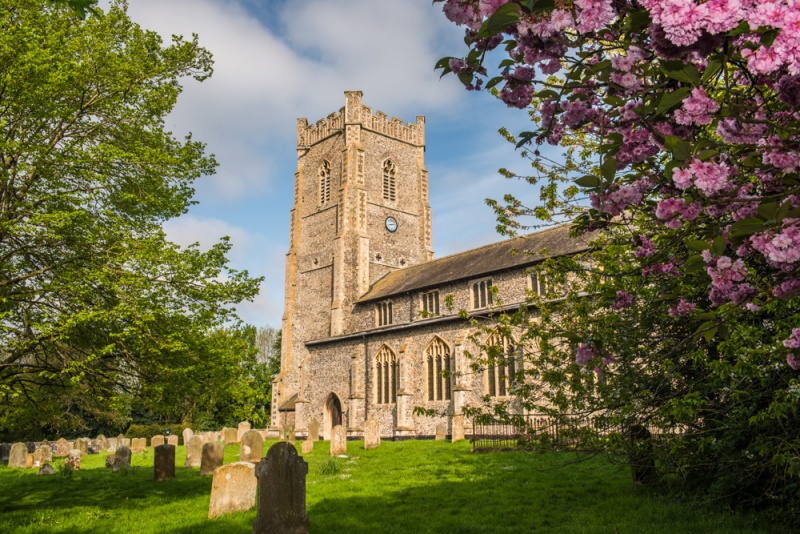 There can be few villages in England with as much historical interest as Castle Acre in Norfolk. Within an easy stroll are the remains of a Norman Castle, the medieval gateway leading into the castle precinct, and a superb medieval priory.

Most people come to visit the castle and priory, but there is another historic site that deserves attention; the wonderful medieval parish church of St James the Great. Even the village website doesn't list St James among its local attractions, and that's a real shame, for it is a superb medieval building, full of historic interest.

Like its dedication, the church is 'Great'; that is, great in size and great in historic interest.

The first church here was established in the late Saxon period. When the first Norman lord of Castle Acre, William de Warenne, founded the priory sometime before 1090 he granted it the income from 'the church at Acre', so we know there was already an existing church, possibly built during the lordship of Toki, the last Saxon thegn of Castle Acre.

No trace of this Saxon building remains, but you can still see a blocked Norman window above the priest's door in the chancel wall, as evidence for an earlier building.

Most of the extremely large present building is a product of the 14th and 15th centuries, when a stream of pilgrims travelling to the Shrine of Our Lady of Walsingham brought prosperity to the village. Aside from pilgrims, the village stood near the ancient Peddar's Way footpath and catered to travellers along the old Roman road by providing inns and hostels. 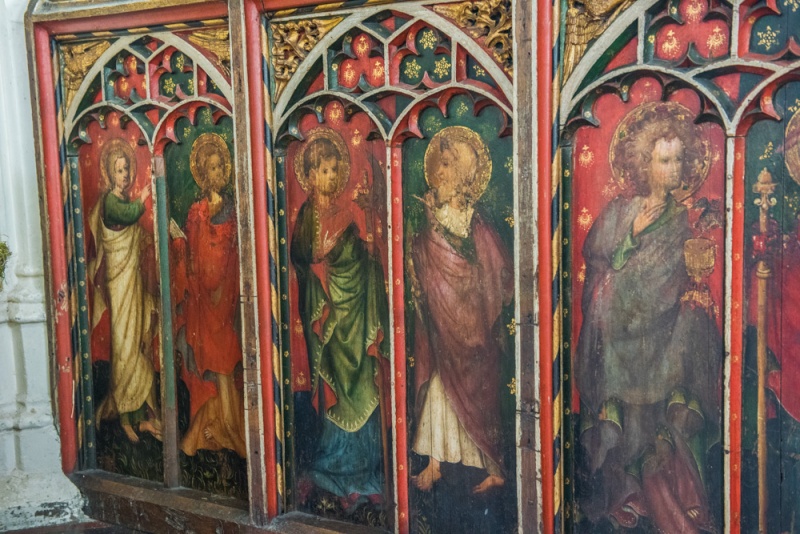 The 15th-century rood screen base

The prosperity brought by travellers helped the parishioners rebuild the early medieval church in fashionable Perpendicular Gothic style. The church was restored twice in the Victorian period, in 1846 and in 1875, but it remains essentially a late medieval building.

Among the 15th century treasures is the hexagonal font, with a beautifully restored painted cover, still with its original counter-balance mechanism for raising and lowering it. The cover towers like the spire of a church, decorated with magnificently detailed pinnacles. The medieval craftsmanship is exceptional.

When we visited a friendly churchwarden showed us how the font pulley mechanism worked. It took her just a simple tug to lift the heavy cover high in the air, using the original 15th-century mechanism.

Also 15th century is a superb wineglass pulpit, painted with images of the Biblical four Latin Doctors (Ambrose, Augustine, Gregory, and Jerome). The pulpit also has a blank panel, possibly intended for a likeness of the patron. The woodwork and the panted panels are simply outstanding.

Another late medieval treasure are panels of the original rood screen, used to decorate the chancel stalls. The painted panels depict 11 disciples of Christ plus St Matthias, with the instruments used to torture them.

The figure of St James has had his eyes damaged, presumably by iconoclasts during the Reformation. St James was a particular target for extreme reformers, who associated him with the Catholic acts of pilgrimage and belief in prayers for the souls of the dead. 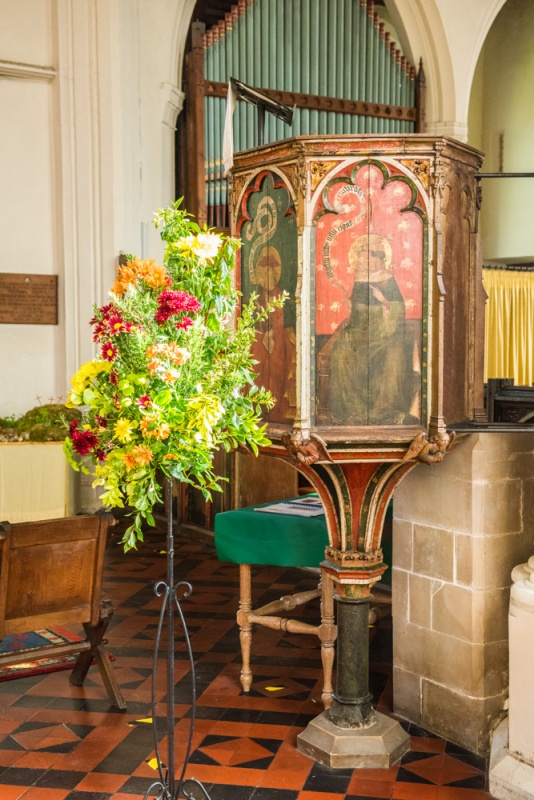 The chancel seats retain medieval misericords and the bench ends have a very good collection of 15th-century poppyhead carvings, chained dogs, and figures of lions. The misericords were probably brought here from the priory church when the priory was suppressed by Henry VIII.

Over the tower arch is a painted royal coat of arms to George II, dated 1748. In the south aisle is an old parish chest dated to 1636.

In the south aisle is a panel of medieval glass depicting a knight bearing a shield.

On the south side of the church is a large blocked opening above a rebuilt priest's door. It has been suggested that this was a huge doorway to allow a mounted knight to ride his horse inside the church. This seems highly unlikely, but the story has been repeated in several places. Would a knight have ridden his horse into the chancel? I strongly doubt it, but see it for yourself and decide.

The story of the 'ride-through' doorway is open to debate but what isn't debatable is that St James the Great is a superb late medieval church, full of historic interest, in a beautiful village. The church was open when we visited and appears to be open daily to visitors. 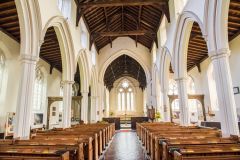 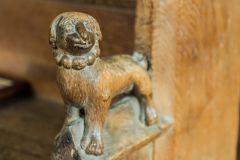 More self catering near Castle Acre, St James the Great