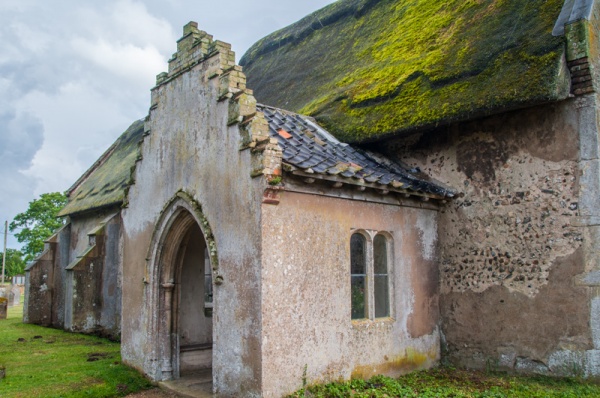 The parish church of St Mary's stands in a very attractive setting at one end of the long village green of Beachamwell. The church has an intriguing late Saxon round tower, tapering from a broad base to a narrower octagonal 15th century top, built with intricate flush flint work. The nave and chancel are capped with a lovely thatch roof.

There is an unusual 15th century north porch with stepped gables - a feature I don't recall seeing in any other country church. The interior is simple, with a nave, chancel, and south aisle.

The westernmost nave column on the north side of the aisle bears fascinating carvings that are the main reason people will come to visit this out-of-the-way church. 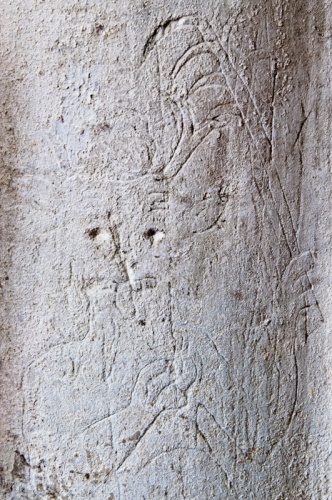 The upper of the carvings is an inscription that appears to be a list of building materials and prices, probably inscribed by the mason responsible for construction on the site.

The lower carving is a delight; it is a likeness of a demon, or devil, usually dubbed The Beachamwell Devil. Parts of the carving are faded, but it has been placed behind protective glass which should prevent any more deterioration.

The devil is deliciously grotesque, with horns and a grinning face. He carries a whip, or frond, in one hand, and his tongue hangs out. He has been described as one of the most important medieval carvings in an English church - certainly, once you see him you won't forget him!

One other feature worth noting is the altar table in the south aisle chapel, which is crafted in an intricate design of wrought iron. This dates to the 19th century and was built to serve both as an altar and as a parish chest simultaneously.

On Wednesday, 2 February 2022 a workman restoring the thatched roof of Beachamwell Church accidentally set the thatch alight. The resulting fire destroyed the roof and left the church interior a smouldering wreck. This tragic accident came just as three years of restoration work on the church were coming to a close.

There are fears that the blaze may have destabilised the Saxon tower, but insurance company Ecclesiastical Insurance, believe that the church can be restored, though the time and expense will be significant.

Please don't make plans to visit without checking the official church website first to see how repairs and plans to reopen the building are progressing! 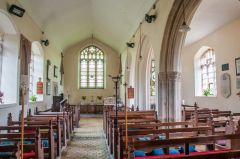 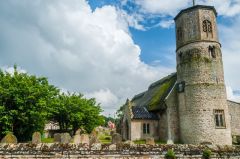 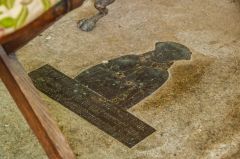 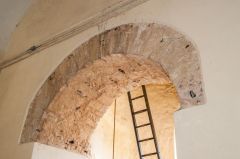 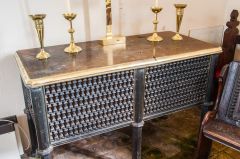