HERITAGE HIGHLIGHTS:   One of the finest Saxon round towers in England 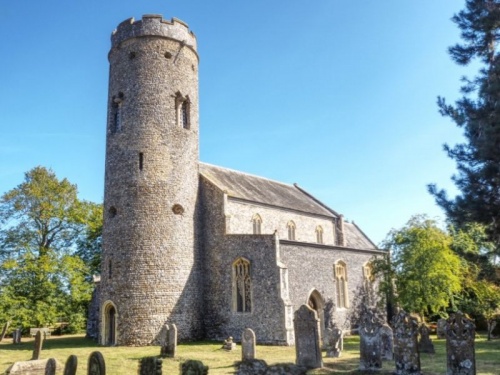 The Norfolk village of Forncett St Peter stands on the west bank of the peaceful River Tas, about 10 miles south of Norwich. On a low rise of ground overlooking the river is the 11th-century church of St Peter, which gives the village its suffix and distinguishes it from the nearby villages of Forncett St Mary and Forncett End.

St Peter's Church dates to around AD 1000 and retains its Saxon round tower, generally considered amongst the finest in England and one of only 131 surviving round towers in Norfolk. Much of the rest of the church is late medieval.

The Saxon building was built to a very simple plan, with a nave, chancel, and round west tower. You can easily spot the traditional Saxon herringbone stonework in the tower walls and in the exterior of the south chancel. The Saxon building was extended in the 14th century with the addition of aisles. 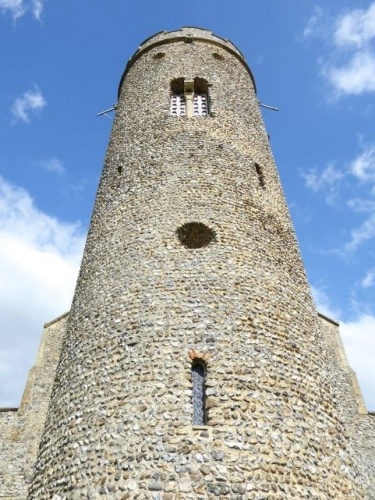 On the tower roof is a fascinating bit of graffiti showing the outlines of men's feet scratched onto the stone surface. These feet outlines were likely left behind by workmen employed during roof repairs in 1851. 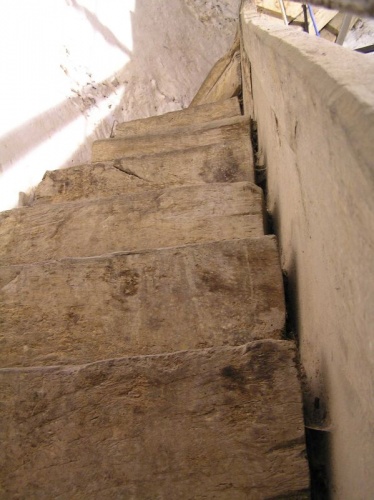 Inside the tower is a rare timber staircase, probably built in the 15th century. Only two other medieval timber staircases have survived in England, one in Kent and the other in Gloucestershire. The tower is normally locked for safety reasons, but the stair can be viewed on one of the church's open days or by arrangement.

There is a 13th-century priest's door in the wall. Above the doorway is a remnant of a Saxon opening, now filled in. This opening presents a puzzle to historians, for it is too high off the ground to be a doorway, and too low for a window. Also on the church exterior, look for the grotesque carvings decorating the string course and parapet.

The church is reached through a 15th-century north porch, which gives access to a Victorian doorway in Gothic style. The porch is caved with crossed keys and crossed swords, the symbols of St Peter and St Paul, respectively. 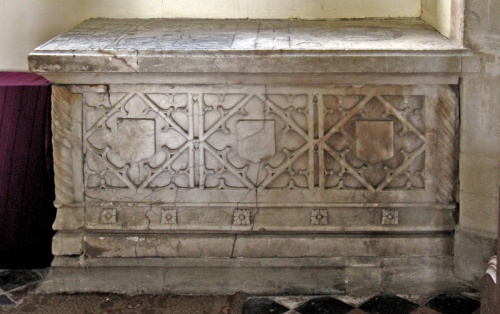 Under the tower arch is a stone slab, or mensa, thought to have originally served as an altar. Other medieval features include the timber roof, piscina, and the plainly carved font. The church also boasts an excellent collection of carved bench ends. Some of the bench ends are Victorian replacements, as many of the benches were damaged by Puritan iconoclasts at the time of the Reformation.

The Victorian carvings are thought to be the work of Henry Ringham, a woodcarver from Ipswich who was responsible for similar work at other churches in the Norwich region.

It is well worth taking some time to study the bench ends. Here you will see a wide variety of subjects including a woman in a confessional box, a miser clutching his money box while a devil lurks between his knees, and a hunter with his dog. 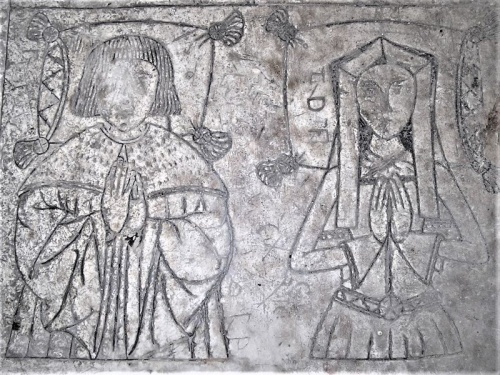 Perhaps the most impressive historical highlight inside the church is the alabaster tomb of Elizabeth and Thomas Drake (d 1485). This tomb takes the form of a stone altar with decorative carvings on the side panels, embellished with shields, and portraits of the deceased couple on the top face, their heads resting on pillows, their hands clasped in prayer.

The inscription above their heads is too worn to be easily legible, but it has been recorded as reading, 'All Christian people that walk by this tomb early or late, of your charity say a pater noster for the soul of Thomas Drake'. 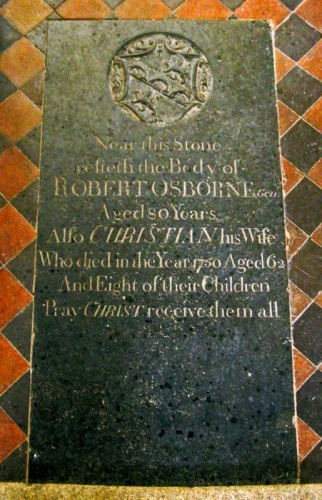 The Drake tomb is very unusual in that the carvings are outlined with 'niello', a mix of gold, copper, silver, and lead that results in a black substance that can then be melted and pushed into the carved lines, producing a high-contrast finish. This use of niello on a medieval tomb is thought to be the only one in Norfolk.

There are two brasses, to members of the Baxter family, dated 1484 and 1535. In the chancel is a stone tablet in memory of Anna Cookson, the daughter of Rev William Cookson, who served as the parish rector. Anna Cookson was a cousin of the poet William Wordsworth and his sister Dorothy. Dorothy Wordsworth lived at the Forncett St Peter rectory with her uncle for five years between 1788 and 1794.

The pulpit is made with Jacobean carved panels, perhaps rescued from an earlier triple-decker pulpit.

The church features four windows with Victorian stained glass. Three of the windows are clear, but the south chancel window has a design depicting St Peter and St Paul, designed by FW Oliphant and installed in 1854.

St Peter's Church is on the Heritage at Risk Register, meaning that it is considered in danger of permanent decay unless it undergoes a costly programme of restoration and repair. A local charity, The Friends of St Peter's, is attempting to look after the church and raise the urgently needed funds. 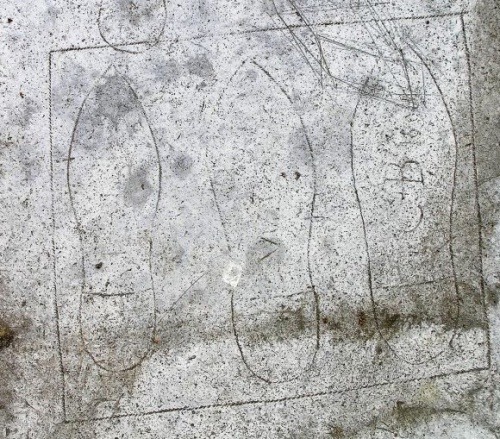 St Peter's Church is at the junction of Mill Road, Low Road and Aslacton Road. There is an unpaved parking area to the left, immediately upon entering the church drive.

All photos are used by the kind permission of the Friends of St Peter's Church and remain the property of their respective copyright holders.