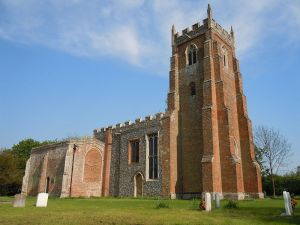 Chilton, St Mary's Church
A 15th-century church of brick and stone, on the edge of the urban sprawl of Sudbury. St Mary's has a very fine brick tower added in the 16th century., and 15th-century Perpendicular windows edged in brick. There is also a 16th-century chantry chapel erected by the Crane family.

There is no Chilton village - that disappeared long ago, perhaps because of the Black Death in the 14th century, or, more probably, because of a gradual shift of population from rural to urban areas long ago.

The best features of the interior are three monuments to members of the Crane family, including the 16th-century tomb of Robert Crane, High Sheriff of Suffolk, flanked by his two wives. In addition, there are small fragments of medieval glass.

St Mary's is no longer in use for regular worship and is in the care of the Churches Conservation Trust.