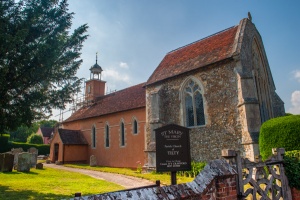 In 1153 Maurice FitzGeoffrey founded an abbey at Tilty, in the north-west corner of Essex. FitzGeoffrey was a vassal of Robert de Ferrers, Earl of Derby, and it seems likely that the Earl contributed to the foundation.

The first monks at Tilty came from Warden Abbey, Bedfordshire, which in turn had been founded by monks from the famous Cistercian abbey at Rievaulx in Yorkshire. The dedication of the abbey probably took place on St Maurice's feast day, 22 September, in honour of the founder.

The abbey was a complex of buildings based around a typical Cistercian plan, including a church, cloisters, refectory, and living quarters. The abbey church was a large building, measuring over 170 feet long and 90 feet wide, and according to the Dunmow Chronicle was begun by Abbot Simon in 1188.

The monks of Tilty reserved the abbey church for their own worship, but they erected a much smaller chapel outside the entrance to the abbey, for the use of women, children, and others not allowed within the abbey grounds.

It is this 'capella ante portas', or chapel outside the gates, that survives today as the parish church of Tilty. It is likely that this small church, dedicated to St Thomas Becket, was used by the monks while the much larger abbey church was being built. 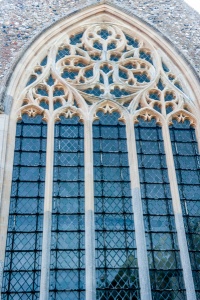 Very little remains of the abbey save for some crumbling sections of a stone wall in the field beyond the church, but life was not dull for the monks of Tilty. On Christmas Day 1215 King John's soldiers attacked the abbey and broke into the church while Christmas mass was being said.

The soldiers ransacked the church, broke into chests, and carried off anything of value. Either as a result of the attack, or shortly after, several monks were killed, and on the north wall of the sanctuary are tombstones to two of the unfortunate clerics.

Tilty flourished during the medieval period, gathering extensive property and enlarging the church. The importance of Tilty is underlined by the fact that the abbot was one of those summoned by Edward I to one of his parliaments.

The gate church was enlarged in the 14th century, but any further plans to extend the church were set aside when the Black Death hit England in 1348. Tilty's sister abbey at Tintern in South Wales gives some idea of what the abbey must have looked like. 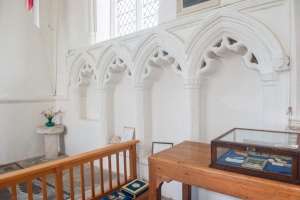 In 1530 Abbot Roger Beverley was deposed for unspecified offences, and given a pension. His successor lasted only 3 years before he, too, was pensioned off. In 1535 the guesthouse was leased to the Marchioness of Dorset for her son, George Medley.

Medley was the uncle of Lady Jane Grey, the Nine Day's Queen, and it seems very likely that she visited Tilty and worshipped at the current church. The abbey was dissolved in 1536, and the lands given eventually to Lord Audley of Walden.

The monastic buildings were remodelled as private dwellings and for a time served as farm buildings. The rest of the abbey was robbed for building materials, until very little remained save the small church we see today and short sections of stone wall in the field beside the church.

If you follow the path to the abbey ruins and continue on, you will come to the site of the monk's watermill, now occupied by a Victorian mill, itself now derelict. Several small ponds in the surrounding fields were probably fishponds for the abbey. 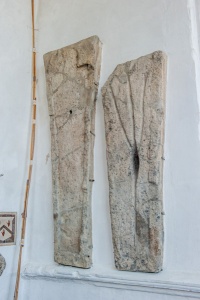 The church is an odd building; with a 14th-century chancel and Georgian nave joined as if pieces of two different churches had been randomly stuck together.

Perhaps the most impressive reminder of the abbey is the wonderful east window, a striking example of elaborate curvilinear 14th-century tracery. The window is composed of five lancets leading to an elaborate tracery wheel, and the sheer size of the window space makes the interior of the church seem spacious and filled with light.

The chancel looks very much a medieval structure, with bulky buttresses shoring up the walls, but the nave is a rather peculiar contrast, plastered in pale pink, and topped with a Georgian cupola atop a small bell chamber. The effect is a wonderful jumble of historical time periods and styles.

Inside there is a very simple Norman font to which traces of paint still cling. The font has a simply wonderful 17th-century cover, painted in foliage patterns. The roof retains many of its original 12th-century beams, which must make it among the earliest parish church roofs in England.

At the entrance to the sanctuary is a beautifully carved wooden chair, decorated with the figure of a woman praying and the words 'My Lord and God. John Wesley. 1776.' Nearby, set upright against the wall, are the very worn grave slabs of two 13th century monks of Tilty Abbey. 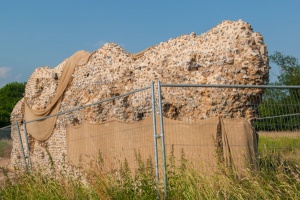 There are several extremely interesting memorial brasses near the altar, including that of Margaret Tuke, who died in 1590 and is shown flanked by her 3 daughters, 3 sons, and 3 children who died in infancy. The latter are shown wrapped in swaddling, only their heads visible. Even so, they are portrayed as miniature adults after the fashion of the time.

There is another beautifully preserved brass of a knight in full armour and his wife, and another of a knight with his head resting on a helmet. Contrast these detailed brasses to the exceptionally simple tablet to Thomas Holden of Lincoln, who died in 1686. On the south side of the sanctuary is a three seat sedilia and a piscina, all set beneath nicely carved niches with open-work tracery.

The pulpit is quite simple but it has a stunning Georgian sounding board, painted with a figure of a bird in flight. Set against the wall is a fragment of a medieval carving showing a hand, and there is a small 17th-century parish chest with very little adornment. At the east end of the nave is a small section of a medieval wall painting showing a repeating pattern of coloured triangles.

In a glass display case are objects recovered from the abbey site, including a section of a carved frieze depicting a pair of dragons, and small pieces of medieval glass. Much of the remained of the interior is painted, in the style beloved of Georgian restorers. The pews are painted pale greyish-green, and the organ at the west end of the nave is a darker green. This makes for a fascinating mix of medieval and Georgian styles mixing together.

The result is quite odd but rather pleasant, and vey enjoyable. Tilty church is fascinating for its connection with the abbey, but also for the collection of medieval and Georgian features. A highly enjoyable visit in a very pretty corner of Essex. 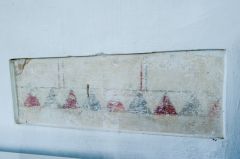 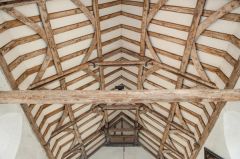 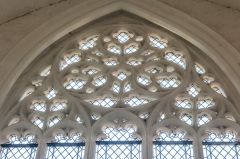 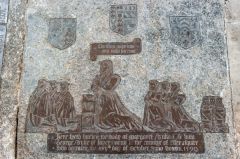 More self catering near Tilty

More bed and breakfasts near Tilty