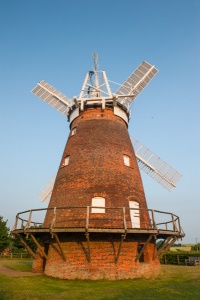 Known variously as John Webb's Mill or Lowe's Mill, Thaxted Windmill is a grade II listed tower mill on the edge of the historic hilltop town of Thaxted, about 6 miles south east of Saffron Walden. The mill stands 48 feet high, and is made of red brick, with four wooden sails.

The mill was erected in 1804 on land owned by John Webb, a successful businessman who owned a number of properties locally, including a brick and tile work, and the local Swan Inn.

There were four other mills in Thaxted at the time, but these were traditional post mills, whereas Webb's Mill was built to a tower design (a post mill rotates the entire body of the structure around a central column, while a tower mill rotates a moveable cap to which the sails are attached).

The family of millers who worked the mill were the Lowe family, and so the building is sometimes referred to as Lowe's Mill. Interestingly, one of the recent leaders of the John Webb’s Windmill Trust that runs the mill is a direct descendent of the Lowe family.

The building material was local brick, fired just half a mile away, and there were 3 sets of millstones. The mill was in operation for just over a century, but by 1907 it was uneconomic to keep open. The advent of efficient steam engines made wind power less appealling and more costly. 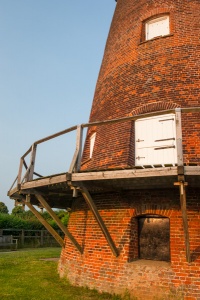 For a time it served as a playground, then in the 1930s as a youth centre. From the 1950s it was allowed to decay until 1970, when a local group undertook to repair and preserve it, paying a peppercorn rent (a nominal sum) to the parish council. These repairs took a long time to effect, and it was not until 1991 that the sails were restored. Five years later a set of grinding stones was made operational and the mill can now ground flour once more.

The most obvious external feature is a gallery, like a wooden boardwalk, at first floor level. This extends all the way around the base of the mill and was made to allow easy loading and unloading from carts. The original four sails were spring sails, adjusted individually from the gallery by hand. The spring sails were later replaced by patent sails, with self-adjusting wooden shutters. The new system allowed all four sails to be adjusted at once by a 'spider', or system of levers. 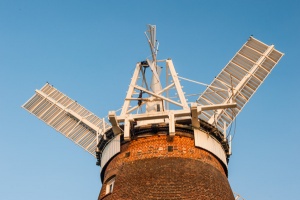 The cap and patent sails

The mill is officilly owned by the parish, though operated by the John Webb’s Windmill Trust. There is a small lawned area around the mill which is used for picnics, and several benches to simply sit and admire the views. It is open seasonally, and entry is currently free, though donations are welcomed.

Apart from the restored milling machinery there is a small museum of local history on two floors, including a manual fire engine that served Thaxted for many years, and old photographs showing the town through history. Current hours are weekends and Bank Holidays, 2-6pm from Easter to end September - but please check the official Thaxted website for up to the minute details.

A final word; the views from the mill are wonderful, especially on a sunny summer evening! 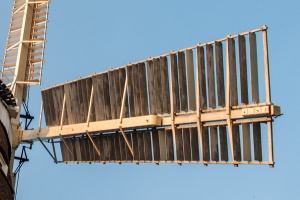 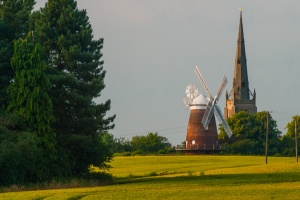 The mill and parish church of Thaxted 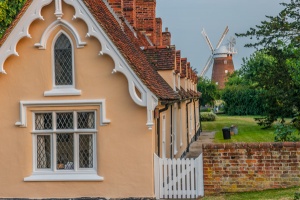 The mill and 1714 almshouses 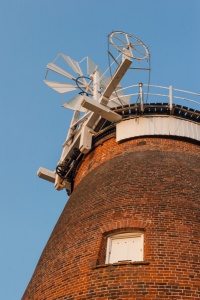 More self catering near Thaxted Windmill