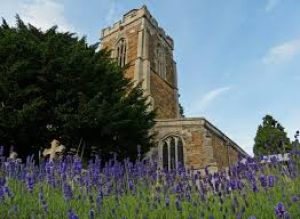 Beeby, All Saints Church
Legends cling to this odd little 14th-century church. Beeby is close to Leicester, but the church seems remote, standing as it does looking out over parkland.

The most distinctive feature of All Saints is the peculiar, truncated spire, which was started but never completed. The core of the church is early 14th century, built of distinctive orange ironstone but the tower is a 15th-century addition.

The entire church consists of a nave with clerestory, chancel, aisles, and west tower. The interior features a 13th-century font with some lovely carvings. The furnishings are mostly Georgian, with some lovely 18th-century box pews.

There is a very nice mid 14th-century chancel screen, but the most appealing feature is the wealth of carved corbel heads which decorate both the interior and the exterior. These are fascinating carvings and date throughout the church's history.

Ah, you're no doubt wondering about the legends I mentioned. They relate to the peculiar steeple. The story goes that two stonemasons who were brothers were responsible for building the steeple. They quarrelled while at work, and both fell to their deaths from atop the tower.

After that, the spire was never finished but was simply capped. The oddly shaped spire became known as 'Beeby's Tub'. An old rhyme tells the story of the legend:

Beeby Tub without a pub,
A church without a spire.
Two brothers fought and broke their backs
And so ‘twas built no higher

All Saints church is no longer used for regular worship and is in the care of the Churches Conservation Trust and at present, it is open every day.

More self catering near Beeby, All Saints Church >>

More bed and breakfasts near Beeby, All Saints Church >>