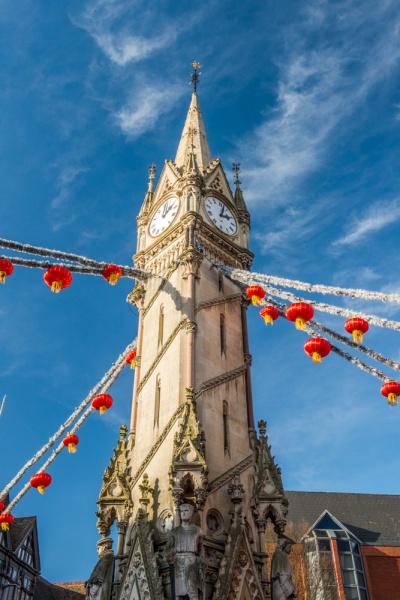 The iconic Victorian Clock Tower is one of the symbols of Leicester. The tower stands at the junction of five streets at the centre of the city's shopping district.

The idea of a Clock Tower was launched by John Burton, publisher of the Leicester Mercury newspaper and founder of the John Burton and Sons printers and photography company. Burton campaigned for years to regenerate the old Haymarket area and create a large public space.

The Haymarket had been used, as its name suggests, as a place to buy and sell straw. By the mid-19th century, the area was run down and dilapidated. In March 1862 the Haymarket was torn down and the area paved. Unfortunately, the town's hay supply continued to be stored there, meaning that it quickly became filthy.

Burton campaigned for another 4 years and the market was eventually moved to Humberstone Gate. That helped clear up the former Haymarket area, but the fact that the former market stood at the meeting place of five busy roads meant that there was continuous horse and carriage traffic, and the paved area was dangerous to pedestrians. 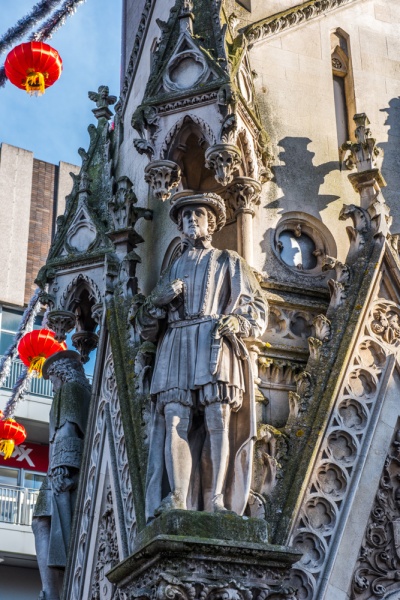 Thomas White statue on the tower

A committee headed by Burton recommended that a structure be built at the meeting place of the five roads to protect pedestrians from horse traffic and make the junction easier to cross on foot. What they were proposing was, in essence, the first traffic island in England.

A four-sided Victorian Gothic tower was suggested, with a clock face on each side. The tower was to be decorated with stone medallions honouring four 'Leicester greats', men who had strong links to Leicester's history and prosperity. The four worthies chosen represent different time periods and themes. The most famous is Simon de Montfort, 6th Earl of Leicester, who led the Barons' Revolt and helped introduce the basic concept of representative government, albeit in a very limited form.

The second was William Wigston, founder of Wyggeston’s Hospital and the Free Grammar School. Wigston's timber-framed house is one of the oldest buildings in Leicester. The third was Sir Thomas White, who established a charity offering interest-free loans to young men starting new businesses. The final worthy was Alderman Gabriel Newton, who established Newton's School for poor students in Leicester and similar schools in the surrounding counties.

The town council agreed to the scheme, but wanted nothing to do with paying for it. It was left to committee members to launch a public appeal for contributions. John Burton took the lead, using his newspaper to rally public support for the tower and to illustrate the proposed designs. Some 472 people subscribed to the project, contributing a total of £872, 2 shillings, and 9 pence. 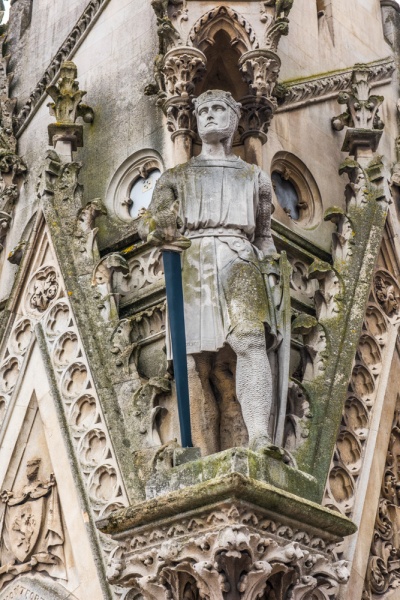 Over 100 designs were submitted to The Committee to Determine the Character of the Structure. The designs were put on public display, then whittled down to a shortlist of three. The town council had the final say on the design and selected a submission by Joseph Goddard.

Goddard's design was brought to life by sculptor Samuel Barfield, a Leicester native. Barfield was well known locally, with several of his sculptures adorning local churches. A team of 32 mason built the structure, under the supervision of King Vann. Mr Vann's team worked quickly, and the Clock Tower structure was completed on 8 June 1868. The top stone was laid in a ceremony by George Barfield, Samuel Barfield's six-year-old son.

The Tower was finished in March 1869 when the statues were installed and the clock mechanisms connected. The clocks were supplied by the Gillet and Bland Company of Croydon, Surrey. The tower was built of Ketton limestone mounted on a base of granite. 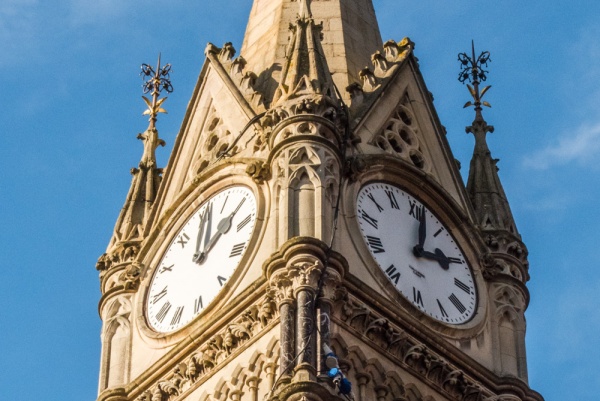 In 1903 tramlines were laid around the clock tower. The maze of lines made the junction the most complex in Britain.

The tower was originally called the Haymarket Memorial Clock Tower, but is more commonly called simply Clock Tower. It is not technically at the centre of the city, but its central location at the hub of the central shopping area makes it in reality the hub or focal point of Leicester. That point is emphasised by the fact that the Clock Tower area was traditionally one of three places where the town crier would read proclamations. At the end of WWII VE celebrations were held here.

Access is easy; the Clock Tower is signposted throughout the city centre and it is an easy stroll from the Cathedral and Guildhall. 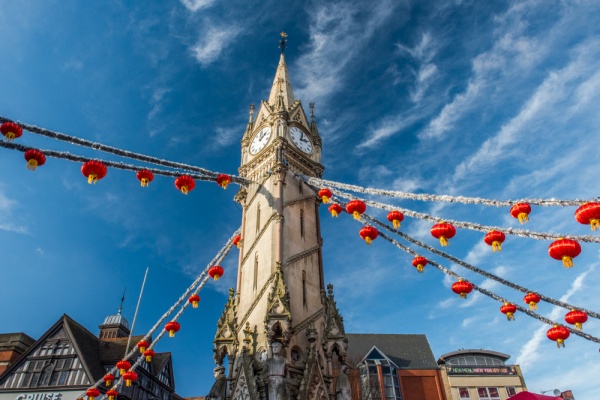 The Clock Tower festooned with decorations