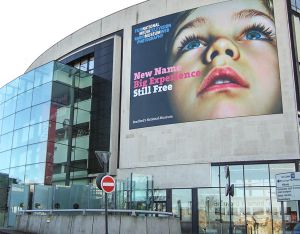 The National Media Museum is devoted to media from film, photos, TV and radio to the web. You can learn to operate a TV camera, or stand in front of one and read the news. See permanent and changing photography exhibits and an IMAX 3D theatre (that's the one with the huge screen and the surround sound that will blow your mind if you haven't experienced it before).

The NMM began as the National Museum of Photography, Film and Television, housed in a former cinema in the centre of Bradford. It forms part of the national network of Science museums that includes the Science Museum in London and the National Railway Museum in York, to name just a few.

The museum is divided into 7 permanent galleries, plus a space for temporary exhibits and a research facility. The 7 galleries are focused on the science of light and colour, television, animation, photography, the Internet, and video gaming.

The Kodak Gallery tells the story of photography, from the first glass-plate photos to modern digital imaging. Many of the 35,000 objects on show were donated by the Kodak company. The Life Online gallery is the world's first gallery focussed on the role the Internet plays in our world. See how the Internet developed and how technology has shaped our lives.

Experience TV looks at the history of television. Learn about the technology behind television from tubes to transistors to LCDs. Learn how advertising on TV works and how it influences our behaviour. The Magic Factory uses hands-on interactive exhibits to explain the science behind light and colour and how that science helps us create photography, TV, and film.

The Animation Gallery looks at how animated images are made, and focusses on British animation history. See how animators create scenes to create entertaining films, and how Wallace and Gromit type films are made. The Games Lounge lets you explore classic games, from arcade games to video consoles. Trace the history of video gaming and see how games are made.

There are 3 cinemas and the museum hosts 2 film festivals annually. When the museum launched in 1983 it was home to the largest cinema screen in Britain, an IMAX cinema standing 5 storeys high.

Temporary exhibits at the NMM draw a lot of interest; the subject matte can be extremely varied. Previous exhibitions have looked at famous photographers like Julia Margaret Cameron and Henri Cartier Bresson, explored Indian cinema, and celebrated the art of Star Wars.

The museum is open daily and is free to enter, though there is a charge for cinema showings. In a public poll the National Media Museum was been voted the best indoor attraction in Yorkshire (2011). 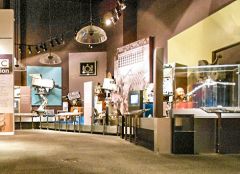