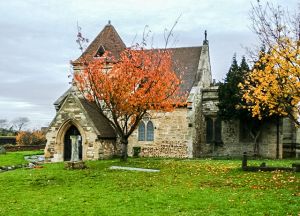 Kirk Sandall, St Oswald's Church
There was a church at Kirk Sandall (formerly Sandall Parva) as early as the 10th century. Some bits of that Saxon church remain, incorporated in the mainly Norman building we see today. Look for traditional Saxon herringbone stonework in the west gable.

The current building is composed of an aisled nave, north vestry, chancel, south tower, and north chantry chapel. It is built of rubble dressed with limestone, beneath a lead and tile roof. Much of the roofing is modern and somewhat belies the ancient core of the building.

St Oswald's was partially rebuilt in the 13th and 14th centuries. It has 13th-century nave arcades and a very fine 14th century west window. Within the church are two 16th century screens. The south doorway, however, is Norman work.

The most interesting feature of Kirk Sandall church is the 16th century Rokeby Chapel. This was built sometime after the death of Archbishop John Rokeby of Dublin in 1521. The story of Archbishop Rokeby's death is interesting. He had served as rector of Sandall Parva (later to become Kirk Sandall) and went on to become vicar of Halifax, Bishop of Meath and eventually, Archbishop of Dublin.

By the terms of his will, his bowels were interred at Dublin, his heart at Halifax, and the remainder of his body at Sandall Parva. Over each of his burials, he requested a chantry chapel to be built, and this was done.

The Archbishop's grand marble monument is in the nave. A later Rokeby, Sir Thomas (died c. 1689), has a very ornate monument near the organ. St Oswald's is a very fine historical church, with some very interesting furnishings. Unfortunately, it is no longer in regular use and is now in the care of the Churches Conservation Trust.