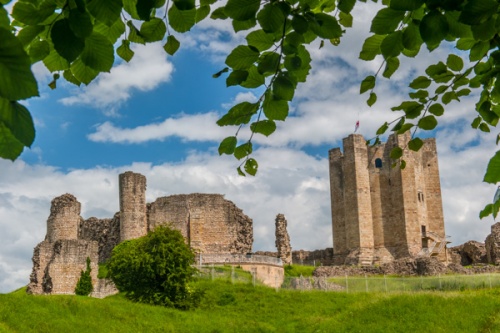 Conisbrough Castle is an imposing 12th-century fortress said to be the inspiration for Sir Walter Scott's novel Ivanhoe. The castle is set on a natural slope above the Don Valley. In the 11th century, Conisborough was owned by Harold Godwinson, who later became King Harold.  The name is a reminder of this royal connection; it is likely a contraction of the Saxon Cyningesburh, or 'King's burh'.

After the Conquest, the castle formed part of the estates given by Willliam the Conqueror to his son-in-law, Earl Warenne, and the Warenne family retained possession of the castle until the 14th century. It was later owned by the Dukes of York and was also owned by the crown for a time.

The castle is set upon a natural defensive position, with a hill rising to the west, with the gap between the hill and the castle forming a deep ravine. This ravine was crossed by way of a drawbridge which was the only entrance to the castle. 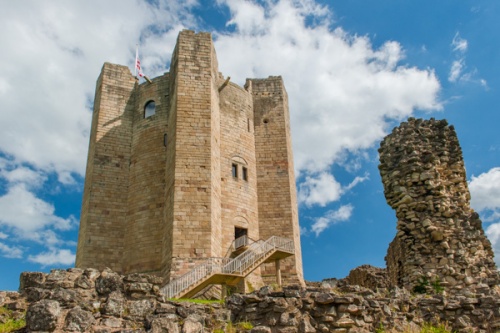 The first castle on the site was little more than a wooden palisade. This was replaced by a stone castle in the current layout by Earl Hamelin Plantagenet, Henry II's half-brother, who owned Conisbrough from 1163-1202.

The imposing stone keep dates to this time; it was built between 1180-1190. It is probably the first example of a circular stone keep in England; before this time keeps were generally square or rectangular in shape. It is also the only known example of a castle in Europe built from magnesian limestone. 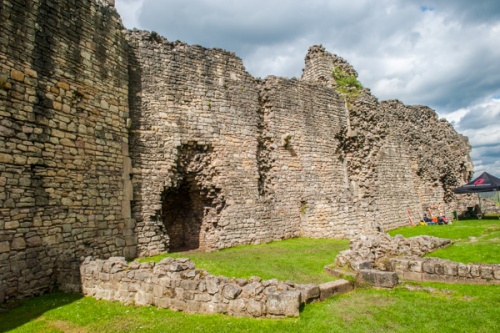 Inside the curtain wall

The keep is four storeys high and is supported on 6 large rectangular buttresses. The keep has welcomed royalty in its time, for it was here that Hamelin hosted King John in 1201. Shortly after the keep was finished, a stone curtain wall was added for further defence.

Built into one of the keep's buttresses on the second floor is a small chapel of two bays, with beautifully-preserved vaulting and carved capitals. In the vaulted basement chamber is a well, offering a supply of water in case a siege pushed the residents back into the keep for an extended period.

On the first floor is the great chamber, where most castle activities took place, and above it is a bedchamber. Both the great chamber and bedchamber had fireplaces, a washbasin, and a garderobe. The keep's buttresses extended above roof level and terminated in turrets. Two of the turrets are solid, while two acted as water reservoirs, one as a dovecote, and the last as a bread oven.

Surrounding the inner bailey is a curtain wall, built of rubble with quoins at the angles. Five semi-circular mural towers are built into the wall on the south, east, and west walls (no towers are needed on the north side, where the natural ditch provides extra defences). 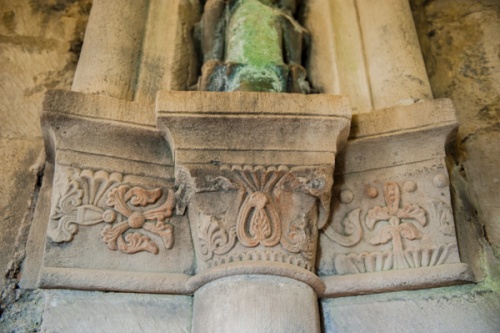 Carved capitals in the chapel

A ruined gatehouse is set into the south-west wall, flanked by a pair of semi-circular towers. controlling access to the inner bailey is a barbican, added in the middle of the 13th century as an extra layer of protection for the gatehouse. The gatehouse and barbican have partially collapsed into the ditch.

Inside the curtain wall are the foundations of several service buildings including a hall and kitchen. Near the gatehouse is a rectangular building thought to have been a chapel.

The castle gradually fell out of use during the 15th century, and by the Tudor period it was described as ruinous. 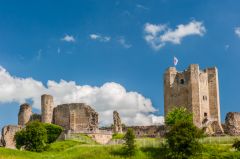 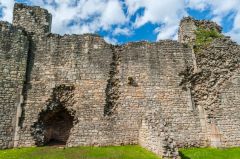 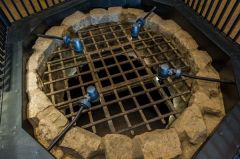 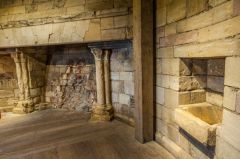 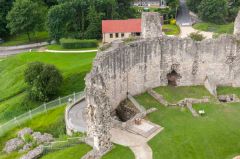 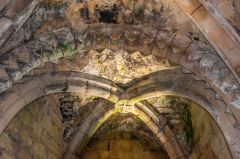 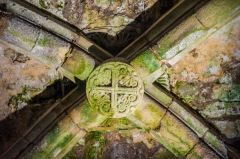 More self catering near Conisbrough Castle >>