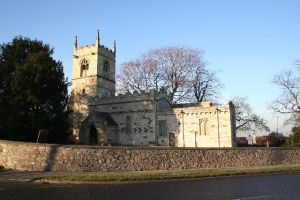 Edlington, St Peter's Church
A delightful mid to late 12th-century church from the period when Norman Romanesque architecture was changing to the style we now call Transitional. St Peter's boasts a wealth of Norman carving of the highest order, including an ornamented chancel arch.

The church was built to a very simple plan, with only a nave and chancel. The lovely pinnacled west tower is a later addition, with the top sections forming a very nice example of Perpendicular style.

Entry is by way of a south porch, leading to wonderful Norman doorway with carved decoration including beakheads, chevrons, and medallions. The interior has some nice 17th-century brasses and pillars with basket and leaf decoration. There is a 15th screen, some nice Jacobean woodwork, and a font dated 1599.

St Peter's has some small claim to fame as the very first church to be vested in the Churches Conservation Trust (formerly the Redundant Churches Fund), an act which took place in 1971. Since that time, the Trust has taken responsibility for preserving over 300 churches of high heritage value throughout England.