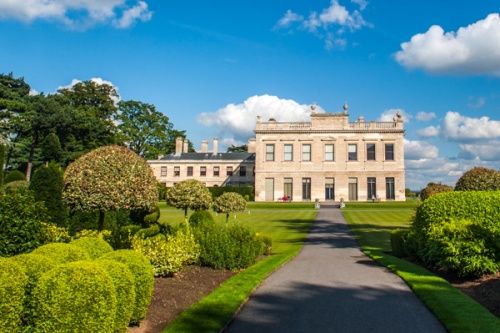 One of the best examples of an unaltered Victorian country house in England, Brodsworth Hall was built in the 1860s by Italian Chevalier Casentini for Charles Thellusson. Casentini's design was actually executed by the English architect Philip Wilkinson, and Casentini himself never saw the house. It is possible that Thellusson's choice of an Italianate design was influenced by Queen Victoria's equally Italianate Osborne House, on the Isle of Wight.

The house took less than three years to build and was finished in 1863. It is built of ashlar and topped with a slate and lead roof. The interiors are beautifully painted with a faux marble effect, and the Drawing Room features a lovely painted ceiling, with gilded decoration including floral symbols, birds, and arabesque ornaments.

This ceiling, in particular, is a good example of the sort of decoration common in country houses during the mid to late 19th century. Also on display are items reflecting the family's sporting interests, including the Goodwood Cup, won by a family-owned racehorse in 1835.

Another famous horse owned by the Thellussons was Rataplan, who won the Doncaster Cup in 1855. The Cup is on display, as are the mummified hooves of the racehorse, to be seen in the perfectly preserved billiard room.

The first Thelluson owner of Brodsworth was Peter (1737-1797), a Swiss banker who had involvement in the Caribbean slave trade. Peter Thellusson made a huge fortune, and by the time of his death in 1797 it was said that a bill of exchange bearing the name of Messrs Thellusson was 'equal to the Bank of England'.

Thellusson made a peculiar will, leaving the bulk of his money to the unborn male heirs of his children, bypassing his own children completely. Not surprisingly, his children contested the will but lost their case.


If the Billiard Room is a Victorian time capsule, the same cannot be said for the rest of the house, which shows the long, slow decline of genteel country house living during the early 20th century. The last owner was Sylvia Grant-Dalton, who gradually 'made do' with less money, fewer servants, and no means to combat the general decay of the house.

When English Heritage took over the house in 1988 they decided to keep the interiors as they were, rather than restore them to their Victorian grandeur.

As a result, Brodsworth is a mix of Victorian design with later 20th-century additions and offers a rather sad and nostalgic glimpse into the decline of the elegant lifestyle of some many grand country houses.

Among the higgledy-piggledy interiors are Charles Thellusson's woodworking room, where you will see a WWII baby's gas mask and a mummified American carrier pigeon - a species now extinct.

Below stairs is a huge kitchen, where the massive Victorian range stands near a smaller, more modern Aga cooker. It is this juxtaposition of the elegant Victorian house and the 20th century 'down at heels' reminders of life at Brodsworth that makes an exploration through the house a mix of pleasure, nostalgia, and a whiff of sadness at the passing of time.

Brodsworth is set in lovely parkland and gardens, featuring a fern dell, rose garden, and lawns, with a summerhouse in classical style. The garden is really a series of individual smaller gardens, restored to their mid-Victorian look. The centrepiece is a restored Dolphin Fountain. One of the newest garden areas is a Victorian Alpine rock garden, a reminder of the Thellusson's inclination for travel. 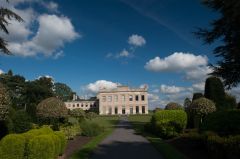 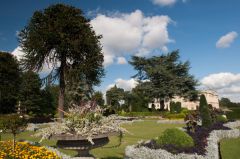 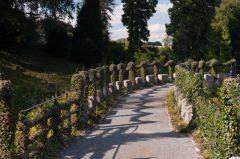 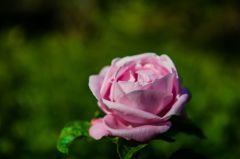 More self catering near Brodsworth Hall >>