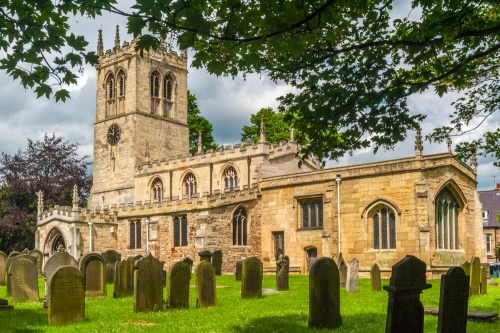 The ancient church of St Peter in Conisbrough may be the oldest building in South Yorkshire, with a history stretching back to at least the 8th century if not earlier. Conisbrough was a royal burgh in the Saxon period (the name means king's burgh'). A reminder of the church's age is a weathered preaching cross in the churchyard, which is thought to be older than the earliest church on this spot.

The first church on this spot was probably standing by AD 740. St Peter's may have served as a minster, or mother church for the region. The high, narrow nave and tower serve as reminders of the church's antiquity.

The Domesday Book records a church and priest, under the patronage of the Warenne family, who owned the Conisbrough estate. They gave the church to Lewes Priory sometime before 1121 (it is hard to say exactly when, as some of the early charters appear to have been forged). The priory gave the living of Conisbrough to the papal chancellor in England. 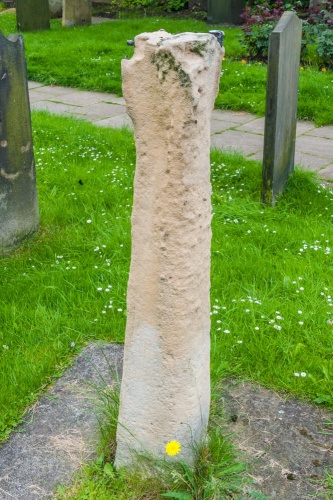 Remains of the ancient
preaching cross

The oldest parts of the present building are the nave and the lower levels of the west tower, which date to the middle of the 11th century, sometime around 1050. That means that the core of the building we see today was already standing long before Conisbrough Castle was built on the opposite hilltop.

The aisles were added as the population of Conisbrough expanded in the 12th century. The chancel was extended in the 15th century when a clerestory was added and the tower raised. The south porch was added at the same time, and Perpendicular Gothic windows inserted in the nave and chancel.

The interior as heavily remodelled in the Victorian period when a stone rood screen and pulpit were added. The pews date to the 20th century and are the work of the famous 'mouseman' of Kilburn, Robert Thompson. Look for his signature carvings of small mice on the pews and in other places throughout the building. 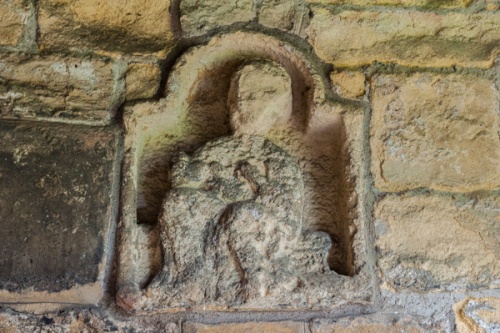 The Romano-British sculpture in the porch

Even older than the preaching cross in the churchyard is a Romano-British sculpture set into a niche in the porch wall. The sculpture is so worn that it is difficult to tell what it is meant to depict but it may be a figure of St Peter or perhaps a depiction of the Virgin Mary and Christ Child.

Set into the wall beneath the sculpture is what appears to be a medieval or Tudor grave slab. the south doorway is Norman, though the pillars that flank it are Victorian. 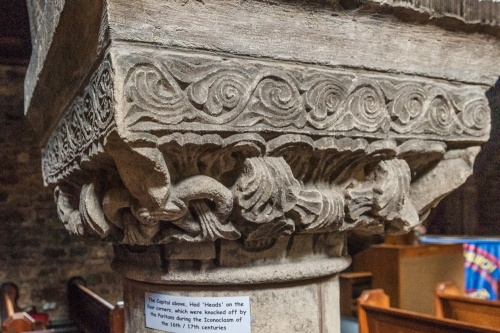 You can tell that the north arcade in the nave was built first; the arches are rounded in Romanesque style while the south arcade arches are pointed. The capitals are all different. At the west end of the north arcade is a beautifully carved capital that may have come from a nearby Roman villa. It has carvings of Roman soldiers, though their heads were destroyed during the religious upheaval of the Reformation when Puritans thought they were idolatrous.

At the west end of the north aisle are two 11th or 12th-century windows with fragments of medieval stained glass in roundels. The roundels depict Biblical figures from the Old Testament. One medieval fragment depicts Prior Atwell of Lewes.

Under the tower is a 14th-century octagonal font decorated with figures of angels holding heraldic shields as well as a depiction of Christ rising from his tomb.

In the north chapel is a 12th-century altar stone from Conisbrough Castle. See if you can spot five consecration crosses carved into its surface. 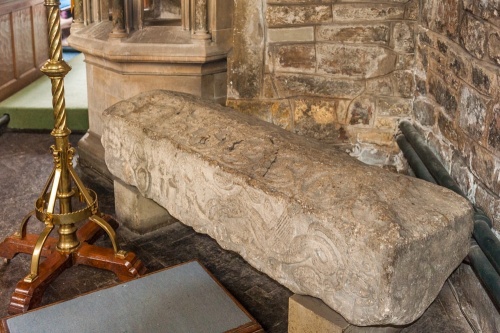 The oldest tomb in the church is a 12th-century grave slab thought to be that of the 3rd Earl Warenne of Conisbrough Castle. The tomb chest is mention by Sir Walter Scott in his novel Ivanhoe, which used the setting of Conisbrough Castle as an inspiration. The tomb cover is carved with two ravens, the symbol of the Warenne family. Set into a niche is the tomb of Nicholas Boswell, a church benefactor

Though the Warenne tomb is interesting, it is surpassed by a superb 12th-century carved tomb, or memorial, in the shape of a tapered coffin. This solid slab of magnesian limestone is carved top and sides with an ornate arrangement of symbols, strange beasts, and human figures.

You can make out figures of a bishop giving a blessing while an armed figure does battle with a dragon with three tongues. The dragon's tail ends in foliage while one tongue ends in a human head. The dragon stands on a prostrate figure of a man with his arms raised. The top shows two mounted nights battling with lances. The carving is intricate and exceptionally detailed.

In the churchyard, near the south porch, is a 12th-century cross slab with an incised cross in its surface. 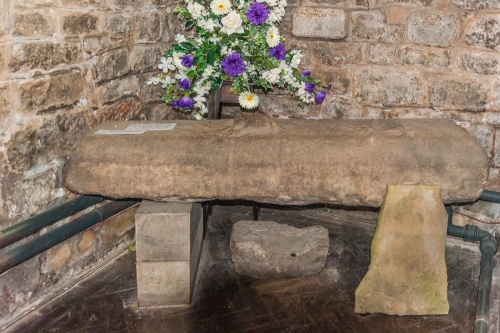 St Peter's Church is located at the junction of High Street and Church Street, a short walk from the castle. There is a car park for church patrons. The church welcomes visitors and was open when we visited. 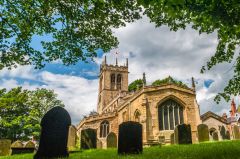 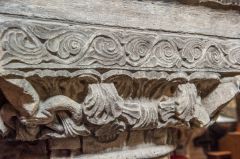 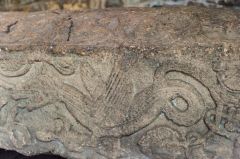 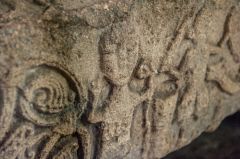 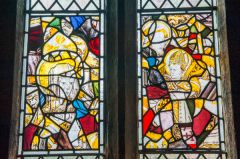