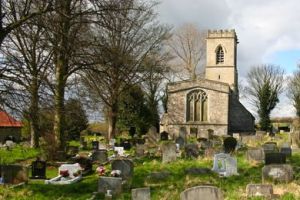 Throapham, St John's Church
The old church of St John's at Throapham is set in a landscape of housing developments and industry. But some charm remains in this historic building, founded in the late 12th or early 13th century.

The south doorway is Norman, with traditional Norman carving decoration. There are fragments of medieval carving incorporated in the south porch, including shears, a cross, and a head within a quatrefoil design.

To that 13th century building were later added very fine Perpendicular features, including large, traceried windows, a slender west tower, and a clerestory heightening of the nave. The font and rood screen are also 15th-century features.

There are some features of historic interest, including a series of memorials spanning many centuries. Among these is a 17th-century memorial brass to John Mauleverer. The most interesting feature is a wonderfully decorated stone coffin lid thought to date to 1300. The coffin is beautifully carved with foliage twining around a cross.

St John's is no longer in regular use for worship and is in the care of the Churches Conservation Trust.