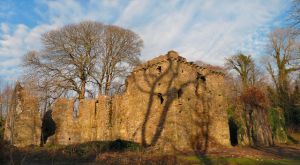 Candleston Castle
More fortified manor than castle, Candleston was built in the late 14th century on the site of an earlier wooden fortification. A ruined wall surrounds a small courtyard, about which are ranged a hall block and tower, with the later additions of a south wing.
The castle stands on a narrow promontory, which determined the layout of the defences. The castle is named for the Cantilupe family, the first feudal tenants of the castle. Unfortunately, the castle builders did not take into account the possibility of coastal erosion.

Candleston stands at the eastern edge of what is now Europe's largest sand dune system. The castle had scarcely been built before the surrounding area began to be submerged by coastal sands. The castle itself was saved from immersion under the sand by dint of its elevated position, but the surrounding area was largely covered, leading to the eventually abandonment of Candleston.

Less than a mile away across the River Ogmore are the substantial remains of Ogmore Castle.

More self catering near Candleston Castle >>