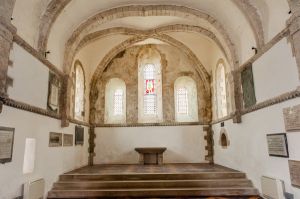 One of the most intriguing and historically important monastic sites in south Wales, Ewnny Priory was established around 1141 by Maurice de Londres (Maurice of London). De Londres' much worn tomb and effigy is in the south transept with a collection of early carved stones. The 12th century nave of the priory church now serves as the parish church.

There was likely a pre-Norman religious settlement here, as evidenced by carved stones found in the church walls. Sometime in the late 11th or early 12th century de Londres founded a priory at Ewenny, which was dedicated by Urban, Bishop of Llandaff until 1134.

A later charter of King Stephen of England dated 1138 mentions Ewenny as belonging to Gloucester Abbey (now Gloucester Cathedral). De Londres gave revenues from churches at St Brides Major, Colwinston, Ewenny, and Ogmore chapel to finance a convent of Benedictine monks. The most likely date for the foundation is between 1116 and 1126.

The new priory was home to a dozen monks from Gloucester, under a prior. The monastic buildings were located where the current farmhouse now stands. The monks of Ewenny founded granges at Corntown, Wick, and Monkmarsh, with private cells at Wick and Llangeinor as solitary retreats for monks. 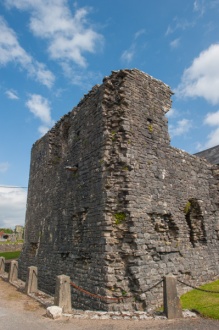 Remains of a fortified
priory tower

It seems that from the priory's foundation the nave of the monastic church served the people of Ewenny parish, while the presbytery and transepts were reserved for the monks.

Your first sight of the priory is a bit disconcerting; it seems for all the world like you are approaching a castle, or fortified manor, rather than a religious settlement. The first things you see are a high stone wall, fortified gatehouse and tower. The monastic church is almost dwarfed by the tower, which hides it from view.

These defensive structures are a reminder of just how unsettled south Wales was in the 12th and 13th centuries. The monks of Ewenny needed protection from Welsh raiders to the north, and the priory acted as part of a defensive network that included castles at Coity, Ogmore, and Newcastle (Bridgend).

The Ewenny fortifications housed a permanent garrison, and the church tower served double-purpose as a lookout post. Edward I took soldiers from Ewenny in his 1284 assault on Wales, and Henry IV used Ewenny as a base to attack Coity Castle during Owain Glyndwr's 1405 rebellion. 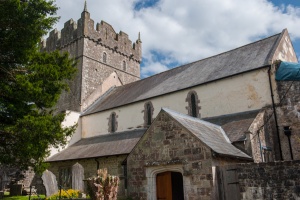 Ewenny was never a wealthy house. Geraldis Cambrensis (Gerald of Wales) records 'the little cell of Ewenny in 1188, and when Henry VIII dissolved the monasteries in 1536 there were only 3 monks here. Following the Dissolution Ewenny was leased to Sir Edward Carne, who purchased the priory and all its lands outright in 1545.

The Carne family built a mansion house on the foundations of the monastic buildings, but the church nave continued to serve as the parish church, as it does to this day.

In the 18th century, the old monastic part of the priory passed to the Picton-Turbervill family through marriage, and the family still retains ownership, though it is managed by CADW, Welsh Heritage. The ruins of Ewenny drew artists such as JMW Turner, who painted a watercolour of the monastery church in 1797.

The main entrance to the church is through the north porch, built in the 16th century and rebuilt in 1895-6. The interior plan is a bit lopsided, as the north transept and chapels were pulled down prior to 1803. At the west end is a simple font, decorated with late Celtic or early Norman carvings at the rim, base, and centre. The font probably predates the current church.

The nave pillars are typical of Norman construction; huge, cylindrical columns relying on their great mass to support the roof. One of the northern columns has a couple of niches cut into it, presumably to support a rood screen, now long vanished. 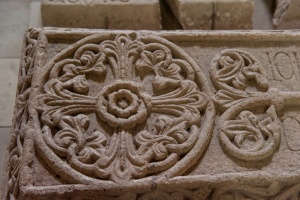 At first glance it seems that the pulpitum screen behind the altar marks the back wall of the church; indeed, my first thought was 'is that all there is?'. Thankfully, the answer was 'no'.

A door leads through the screen to the south transept and the presbytery, passing from the old public area of the monastic church to the monk's domain. And here is the true treasure of Ewenny Priory. The south transept is filled with a collection of carved stones, many pre-dating the Norman invasion.

There are several wheel crosses and a wonderful 12th-century depiction of Christ entering Jerusalem almost hidden in the corner of the transept. In the centre of the transept are graves of priors, and memorials to later Carne and Turbervill family members.

The most interesting tomb is that of Maurice de Londres, son of the founder of Ewenny, decorated with a marvellously carved foliated cross. Beside this is a broken grave slab of Maurice's son William (d. 1208), and a broken effigy of Lady Hawise de Londres. In the floor by the rear of the pulpitum screen is a large area of original medieval floor tiles.

An oak screen separates the transept from the presbytery. The top section of this screen dates to the 14th century, and the lower section to the early 16th century. The presbytery itself is an absolute gem; one of the best examples of Norman architecture in Wales.

The area is divided into three bays, and strangely the bays have different styles of vaulting. The first two are barrel-vaulted - no mean feat considering the span covered by the vault - while the easternmost bay over the altar uses cross-rib vaulting. This peculiar style may have copied Ewenny's mother house at Gloucester Abbey. At the eastern end is a stone altar, rebuilt using the original medieval altar slab. 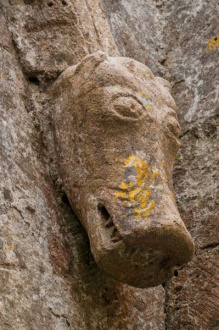 The area around the three deeply set east windows is decorated with wall paintings dating from 1140 to the mid-13th century. The early paintings are thought to be the oldest Romanesque wall-paintings in Wales. The walls of the presbytery are lined with tablets to members of the Turbervill and Carne families.

After you've finished exploring the church interior it is worth having a quick look at the ruined north transept from the churchyard. This is the only accessible area of the medieval priory. The most interesting feature of the ruins is a carved dragon head decorating the entrance arch to a long-vanished chapel.

If you walk along the lane from the churchyard you pass remnants of the defensive structures associated with the early priory, including a ruined tower and gatehouse, and large sections of the perimeter wall. These parts of the priory are now in private hands but you can get a real sense of the rather impressive fortifications from outside. 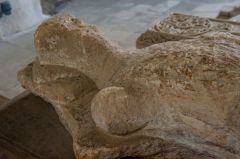 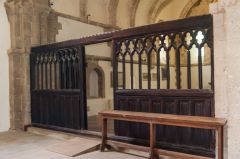 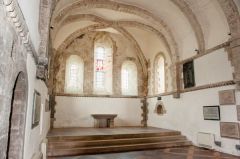 More self catering near Ewenny Priory >>