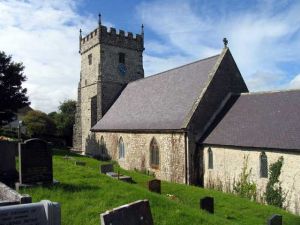 St Bridget, St Bride's Major
St Bridget's is a 12th-century Norman church, with a 16th-century preaching cross, a 13th-century grave slab of a knight, a 16th-century memorial to the Butler family, and a late 17th-century Wyndham memorial.

The first record of a church here dates to 1141 when Maurice de Londonia gave 'the church of St Bridget' to St Peter's church in Gloucester (later to become Gloucester cathedral). We can assume, then, that the church was already in existence, probably for some time before the grant.

The location chosen by the builders of St Bridget's is interesting; it stands on a small hill near the ancient Soldiers Way, used by the Romans and then by the Norman invaders as a link to nearby Ogmore Castle.

One of the historic highlights of St Bridget's is an incised grave slab to Sir John le Botiler of Dunraven, who died in 1285. The slab was originally set atop the stone coffin you can see by the south wall of the sanctuary. Botiler's feet rest on a wyvern, and he bears typical late 13th-century armour. Look for the two cups on his helmet, representing the Norman origins of his name, 'cup-bearer', or 'butler'.

There is another medieval slab in the sanctuary, probably meant to commemorate an unnamed priest.

In the churchyard stands a 16th-century preaching cross, atop a stepped plinth. The cross was damaged by Cromwell's soldiers, and the steps are worn from the combination of pilgrim's kneeling to pray, and by farm workers using the stone to sharpen their sickles.

There is a poignant tale attached to a grove of trees on the Bridgend road, as you enter St Brides Major. In 1815 the vicar of St Bridget's was the brother-in-law of Sir Thomas Picton. Picton stayed at the vicarage and took his last communion in St Bridget's church before leaving on military duty under the Duke of Wellington. He fought and died at the Battle of Waterloo, and the trees were planted as a memorial.

As of this writing, St Bridget's church is normally open daylight hours, but do check with the church website before visiting.