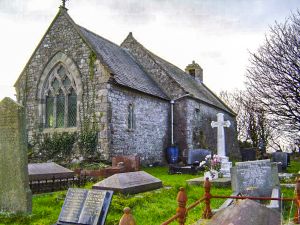 Monknash, St Mary Magdalene Church
St Mary's is a very simple 12th century church consisting of a nave, chancel, south porch, and west bellcote. If it wasn't for the bellcote and porch you could mistake this simple stone building for a rural cottage.
History
From the mid-12th century Monknash manor served as a grange of Neath Abbey, and the connection gives us the 'monk' in the Monknash name. Remains of the monastic grange can still be seen as a large rectangular enclosure, and a later dovecot and tithe barn still stand. It isn't clear of the church was built to serve the grange, or if it already existed when the grange was established.

The church definitely dates to the Norman era, but was heavily restored in the Victorian period. The restoration removed all the box pews that filled the interior, and inserted a new screen at the west end of the nave. Though the interior is largely Victorian, the exterior, except for several windows, has hardly been altered at all, making St Mary's an excellent example of a fairly complete Norman country church.

A curious local tale says that the church roof is made from timbers salvaged from the wreck of a Spanish Armada ship on the coast nearby.

The stone pulpit is rather oddly entered through an opening cut into the chancel screen. The chancel floor is made from grave slabs of local families.

The church registers date to 1754 and St Mary's is listed as Grade II* for its historic interest.