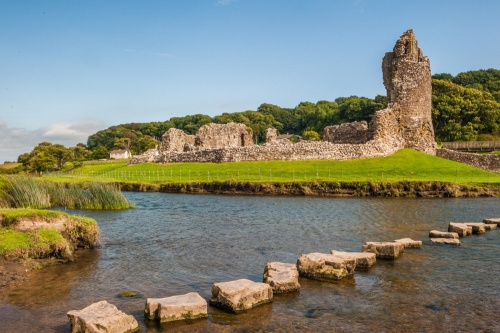 This picturesque Norman castle was constructed to guard a crossing of the River Ewenny just before its confluence with the Ogmore. The builder was William de Londres, a follower of Robert Fitzhamon. De Londres was one of the so-called 'Twelve Knights of Glamorgan', a group of semi-legendary knights who helped Fitzhamon conquer south Wales and were rewarded with extensive lands throughout the region.

Construction may have begun around 1106, at the same time that De Londres built nearby Ewenny Priory. The original fortification was little more than a ringwork of earth and banks, but was soon replaced by a stronger stone fortress, possibly by De Londres' son Maurice.

The keep at Ogmore is the oldest in Glamorgan and served as the focal point for administering the district. Strangely, given the administrative importance of the castle, no permanent settlement grew up here; perhaps the marshy nature of the riverside location deterred settlers.

The Welsh attacked Ogmore in 1116 and De Londres was forced to cede possession. He was soon back, however, and the Londres family retained control of Ogmore until 1298, when the Londres heiress Maud de Chaworth married Henry, Earl of Lancaster.

The Dukes of Lancaster owned the castle until it passed to the crown in 1399 with the accession to the throne of Henry Bolingbroke as Henry IV. Ogmore was damaged in the Owain Glyndwr rebellion of 1405, but we do not know whether it ever surrendered to Glyndwr's rebels. After the rebellion, a large rectangular stone building was erected in the outer ward to serve as a courthouse for the region. It remained a courthouse until 1803, long after the castle itself had begun to crumble into ruin.

The castle gradually fell out of use in the 16th century, but Court House was inhabited until 1803. Near the Court House is a late 13th-century lime kiln, easily recognised by its circular foundation walls. 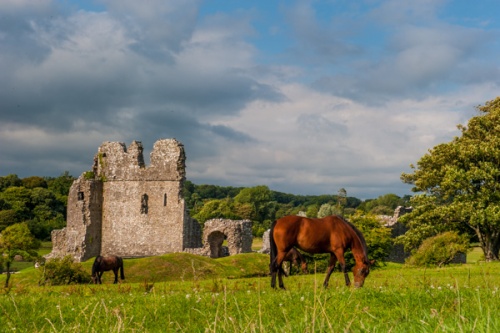 The castle site is roughly oval, with a striking stone tower keep. The keep was likely erected by Maurice de Londres, son of William. Maurice de Londres' tomb can be found in the ruins of Ewenny Priory, founded by his father. As for the keep, it originally stood two storeys high, but a third storey was added later. A small rectangular gatehouse is built into the curtain wall, and nearby is a 12th-century vaulted cellar.

The best surviving features include the curtain wall, medieval hall, gateway, and bridge abutments. However, the most intriguing feature is a 'cellar', a partly subterranean chamber reached by a vaulted entrance. This was probably used for storage. Outside the keep a very worn carved Celtic stone stands on a plinth, its incised patterns still discernable despite centuries of weathering.

The castle is well signposted off the B4524 to Ogmore-by-Sea. There is a steep and rather rough lane down to the castle and a riverside parking area. This is an open site, accessible at any time, but there are no facilities, though there is a very popular pub across the main road, opposite the lane to the castle.

It is impossible to write about Ogmore without mentioning the stepping-stones across the River Ewenny. The stepping stones appear in almost every photo of the castle, and they certainly act like a magnet for children (and adventurous adults) visiting the castle.

Unless the water is extremely high the stepping-stones are quite safe to cross; I watched a 5-year-old girl practically stroll across the river. And its worth the crossing, for the view of the castle across the river is wonderful, with horses peacefully grazing in the pasture beyond the castle enclosure.

This was a fun place to visit. The river was beautiful, and the stepping-stones were great fun, especially for watching other people on them. Oh, and there was a castle too. Did I mention the stepping-stones? They went for a good forty feet, all very stable. Do you want to hear about the castle? Very well then...

Ogmore is one of the few Welsh castles I've seen that use a motte and bailey structure. To make up for the failure to flout the convention, Ogmore has no keep. Or you could say the main castle is the keep. The outermost layer is an earthwork, with a wall and ditch. This is the edge of the bailey. Inside, there's a small stone building that was used as a very cramped courthouse, but no others remain.

Then comes the moat. It once held water, and you can see the drainage points in the walls that cross the moat. Yes, you read that right. Two walls either side of the entrance run outwards from the main castle to the bailey, creating a pair of small bridges. I presume they were once higher and lacked their bridge-like quality.

Within the moat are most of the buildings. There were pleasant apartments, or so we deduced from the brickwork and fireplaces, but nothing that quite qualified as a keep. The outer walls are still tall, but the buildings inside are mostly reduced to foundations.

And beware! There are a few sudden drops. This is a castle to wander around sedately. Look carefully before you step over any walls. Also, keep an eye out for passing horses. The farm beside the castle runs some sort of horseback tour, and you should see riders passing in groups of about twenty. They'll cross the river by the stepping-stones, which you really should come and see. 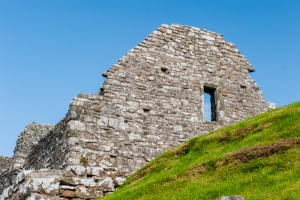 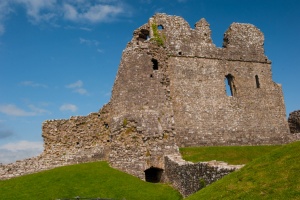 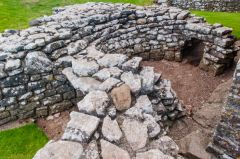 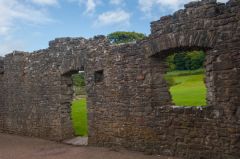 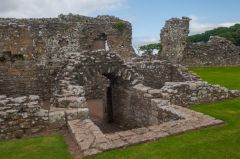 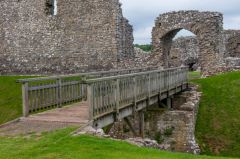 More self catering near Ogmore Castle >>