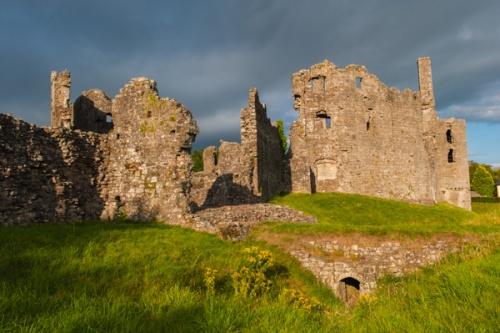 Payn de Turberville erected a rudimentary ringwork castle and wooden palisade here in the very early 12th century, possibly on the remains of an earlier Welsh fortress. His ancestor Sir Gilbert de Turberville replaced the earlier castle with a stone structure in the 1180s, including a curtain wall surrounding a stone keep. 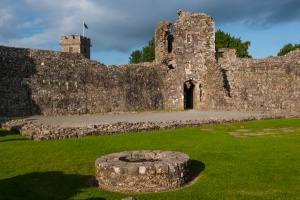 The inner ward and well

Further rebuilding in the 14th century left us with the castle we see today, with the great hall, kitchen block and round towers; and the east gate, with its portcullis and drawbridge.

Like so many castles in Glamorgan, Coity was damaged in Owain Glyndwr's early 15th-century uprising. Following the rising, the castle was strengthened with the addition of a new west gate in the outer ward and a new gatehouse in the south tower.

The castle fell into ruin after the 16th century, but what remains is an impressive reminder of the might of the Marcher Lords in Wales. 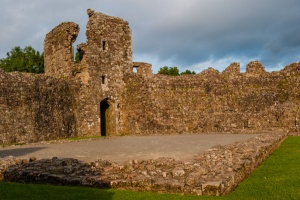 The castle is well signposted but parking isn't. We found a spot on the side of the road near the entrance to the churchyard. It was only after exploring the castle that we realised there was a small parking area at the western edge of the site, but you wouldn't know it from the signage!

In theory the site is open 10-4pm, but we visited at 7pm on an overcast August evening and found the site open. Indeed, a group of local teenagers were using the castle walls for climbing challenges.

It amazes me that Coity Castle isn't better known; it is easily the equal of more famous castles in south Wales. The ruins are very extensive and rather fascinating to explore. I highly recommend Coity Castle!

There's one thing about the castle ruins that intrigued me; as you pass through the eastern gatehouse to enter the inner ward, you practically stumble over the foundation walls of a large rectangular building, set at a peculiar angle almost against the gatehouse itself.

This mystery building seems totally at odds with the layout of the rest of the inner ward; indeed, it is hard to see how it could possibly be accessed; or how the gatehouse could be used with this odd structure blocking the entrance passage. The CADW information panels merely describe it as an 'unknown' building. What is was used for, or why it was built in such a peculiar location, is a mystery. 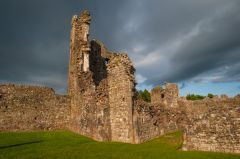 More self catering near Coity Castle >>