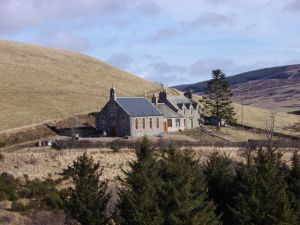 Upper Cabrach church and manse
The small hamlet of Cabrach gives its name to an upland plateau on the border of Aberdeenshire, an area of deserted moorland and deer forests. The A94 crosses the plateau on its way between Rhynie and Dufftown.

At the western edge of The Cabrach the road passes through the dramatic Glacks of Balloch, a high pass of rugged beauty. The area surrounding The Cabrach is rich in historic houses.

Also within reach are Leith Hall, a 17th-century mansion, and Balvenie Castle, once visited by Mary, Queen of Scots.

More self catering near Cabrach >>

More bed and breakfasts near Cabrach >>