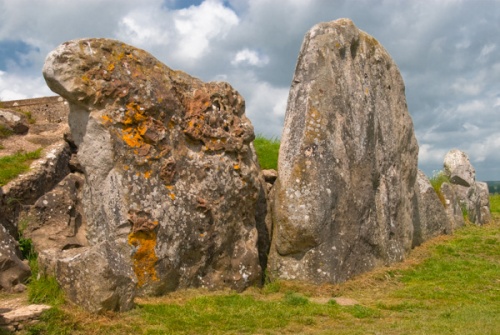 West Kennet Long Barrow
Perched high on a ridge looking down on Silbury Hill and the ancient cluster of monuments at Avebury is the Neolithic long barrow of West Kennet, one of the largest and most impressive barrow tombs in England.

The barrow was built about 3650 BC and used for only a short period of time as a burial site. Like most similar barrows, West Kennet was a communal site, not a memorial to a single important person. The remains of some 46-50 people have been found in chambers built into the mound, which was in use for about 1000 years before the chambers were sealed and the barrow closed.

Grave goods were found with the skeletons, including bits of pottery, beads, a stone knife, and other stone tools. Most of these goods date to between 3000 and 2600 BC. 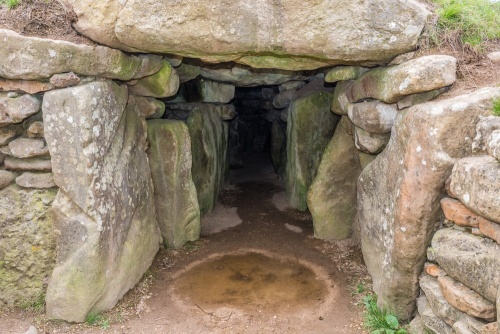 Around 2000 the tomb was sealed, and the central passage was filled with rubble and earth. The forecourt was blocked with sarsen boulders and a false upright made from two large sarsen stones. Finally, three huge sarsen stones were set up to block the entrance area.

The barrow was made of sarsen stones and chalk rubble. The main entrance is in the east, with a central passage leading 18 metres to 5 small burial chambers, 2 on each side and one at the end. The entrance is through a semi-circular forecourt with a front of upright sarsen stones on a north-south axis.

There were originally ditches all around the barrow but most of these have been destroyed by ploughing. The barrow is covered in turf, but it would originally have been covered solely in white chalk, so it would have stood out like a beacon on the top of the hill, and been visible for quite some distance away. It almost certainly formed a part of a vast ceremonial landscape in the Avebury area. 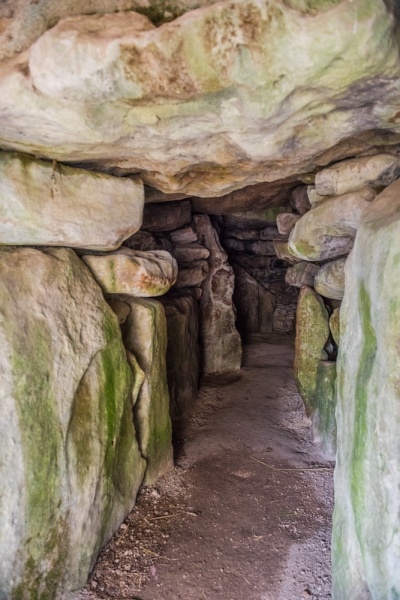 Archaeologists suspect that the barrow was built in two phases. If you look about halfway along the barrow mound you can see a slight bulge, where the barrow takes a deviation off its axis. Whether this new alignment was intentional or the result of dodgy building techniques, we simply don't know.

The barrow was excavated in 1859 and again in 1955. It was then reconstructed in its present form so that visitors could enter the central passage and crawl, or waddle like a duck, to the burial chambers. 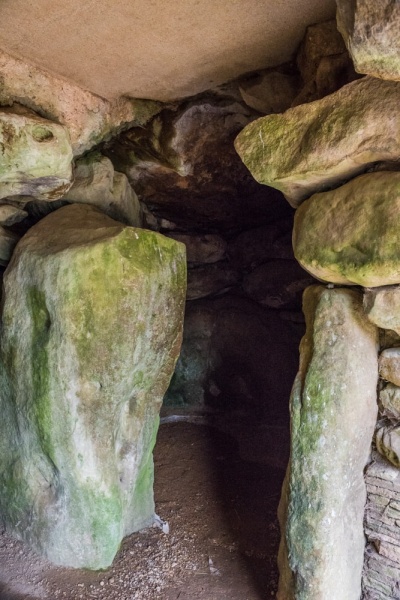 The northern side chamber

There is a layby for parking on the south side of the A4, almost opposite Silbury Hill. From the layby, a signposted trail leads up the edge of a farm field. The going is fairly easy, but it does get steeper near the crest of the hill. It should take no more than 10 minutes to reach the barrow, even if you do huff and puff a bit on the way. There is an information plaque at the site, but no other facilities.

You can walk into the barrow and explore the central passage, the side chambers and the main chamber at the centre of the barrow. The central chamber has a plexiglass window set into the roof the chamber that lets in enough light to see clearly and to admire the corbelled construction.

If you are interested in a short addition to the West Kennet experience, there is a small holy well at the base of the hill, called Swallowhead Springs, which is one of the sources of the River Kennet. To reach the well, follow the line of the fence west at the foot of the hill. A faint trail follows the fence and ends at a copse of trees, and the well is in the centre of the copse.

Visitors to the Swallowhead well have left offerings in the form of coloured strips of cloth tied to the branches of the trees that overhang a small pool of water where the spring bubbles up out of the earth. 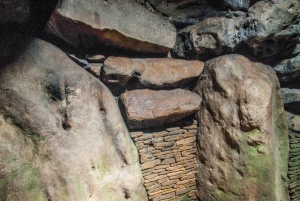 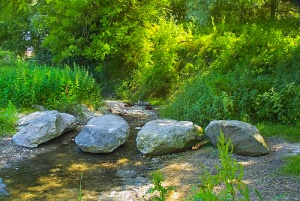 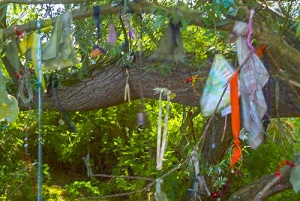 Colourful offerings at the holy well