HERITAGE HIGHLIGHTS:   One of the largest causewayed camp enclosures in England 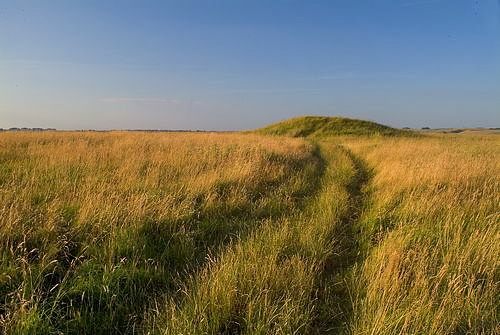 Windmill Hill
Windmill Hill, near the Wiltshire village of Avebury, is the most famous causewayed camp in Britain and gave its name to the culture which created it. It may have been used as a communal gathering place, and for religious observances.

Windmill Hill is almost like a 'brand name' among archaeologists; the pottery finds at this site were so distinctive that they gave their name to similar finds all over Britain, and 'Windmill Hill' became almost synonymous with a style of ancient pottery and the time period and culture it embodied.

The reason that Windmill Hill has such a high profile is simple; it was one of the first prehistoric sites to be thoroughly investigated and it provided a lot of information on the life of early agricultural communities in England. It is also the largest causewayed enclosure in the country.

What is a 'causewayed camp'?

At Windmill Hill there are three long ditches enclosing an area of 21 acres. The ditches are not continuous; that is, there are large gaps in the earthworks, so this was not a defensive enclosure like a hill fort. The gaps, or ramped passages, in the earthworks are what makes this type of enclosure a 'causewayed' camp.

Excavations have revealed large deposits of animal bones, suggesting that the 'camp' was used for large ceremonial feasts. Another possibility is that animal trading was carried on here. It may more generally have been used for ritual observances. 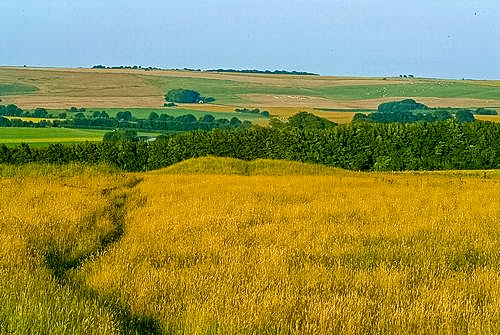 Windmill Hill was 'discovered' by Alexander Keiller, who is most famous for his work at nearby Avebury Henge and Stone Circles. In the 1920s the wireless radio pioneer Guglielmo Marconi planned to build a radio relay station on top of the hill, but Keiller stepped in and bought the site.

Keiller carried out years of excavation on the three ditches that surround the hilltop, and discovered large amounts of pottery and bone fragments (both human and animal), but his prize find was the intact skeleton of a child. Some of the finds are displayed at the Alexander Keiller Museum at Avebury, just outside the manor house.

The hilltop was in use before the ditch and bank system was built, probably well before 3000 BC. The concentric ditches were built around 3000 BC, and the site was in use for about 500 years before it was abandoned. The hill summit was later used as a Bronze Age cemetery, with large tumuli providing the only obvious reminder of this later culture.

The scale of the work necessary to build the enclosure is awe-inspiring; some 62,000 hours of work was needed, spread out over several years.

Immediately east of the circular earthworks is a rectangular enclosure, built at the same time as the main camp. This may have been a mortuary area, where dead bodies were left to be picked clean by birds and animals before a ritual burial of the bones.

There isn't actually a lot to see at Windmill Hill. That isn't meant as a disparaging remark at all; the sheer scale of the site is impressive, but the ditches that enclose the hilltop are considerably worn, though the later Bronze Age burial tumuli provide welcome relief in a rather featureless landscape. But the views are excellent, and it is impressive to realise just how long this area has been used by different cultures, each of whom has left a mark on the landscape.

Getting there can be a bit of a challenge and a good OS map is helpful. From Avebury Trusloe village a road leads part way up the hill until it peters out, leaving you to walk the final section. You can also take the signposted footpath behind Avebury Manor which heads north, then turn west up the hill to the summit.

More self catering near Windmill Hill >>