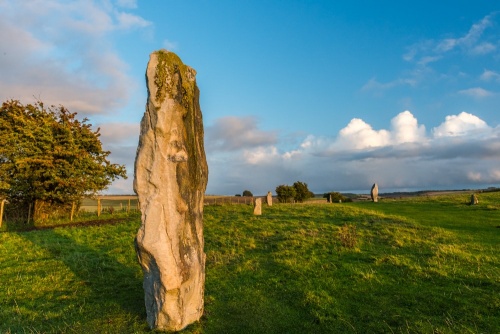 Looking south along West Kennet Avenue
West Kennet Avenue is a long, winding prehistoric arrangement of standing stones, composed of parallel rows of stones stretching the southern end of the henge at Avebury to The Sanctuary on Overton Hill, over 1.5 miles away.

The avenue was originally composed of 100 pairs of stones. Of these just 27 remain standing, most near the West Kennet end of the Avenue. The locations of another 37 known stones are marked by small concrete posts. The avenue does not run straight across the fields but rather it bends several times. This odd route may have been created to avoid an existing Neolithic settlement.

Many of the stones had disappeared by the 17th century when John Aubrey made the first historical study of the ancient landscape around Avebury.

The Avenue seems to form some kind of a processional way, used for ritual observances. Quite what those observances are is anyone's guess. 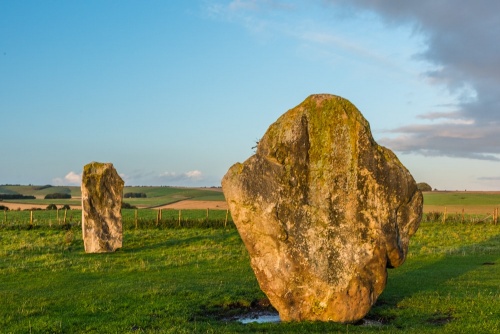 A 'male' and 'female' stone

The size of the stones varies quite markedly, from a high of 3.3 metres down to 1.6 metres, which is noticeably smaller than stones used to create the stone circle inside Avebury henge. The rows are on average about 15 metres apart, and stones in each row are spaced at about 25 metres.

One theory suggests that the stones were alternating symbols for male and female, with larger, more upright stones representing males, and shorter, diamond-shaped stones representing females. This theory is strengthened by the fact that the two types of stones appear opposite each other. That would suggest some sort of fertility aspect to the Avenue, but there is no solid evidence to prove this hypothesis. 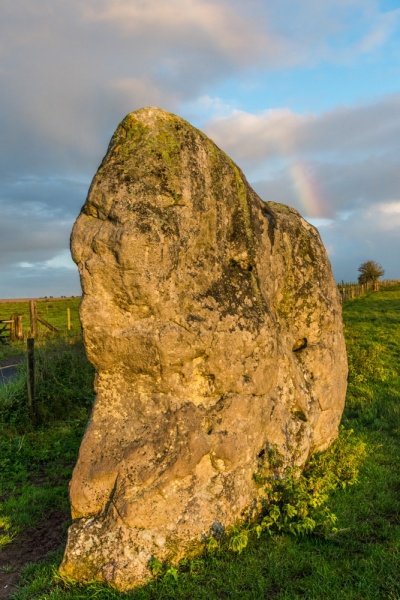 A rainbow over the Avenue

Sometime after the Avenue was erected a number of individual burials were placed at the foot of several stones. Four of these burials were excavated in the 1930s by Alexander Keillor, the amateur archaeologist and heir to the Keillor marmalade fortune who lived at Avebury Manor. Keillor discovered that the burials all dated to 'Beaker Period' of the Bronze Age, roughly 2500-1800 BC.

Three graves held the bones of a single person but the fourth had the skeletons of three people. One theory suggests that these were locally important people buried by the stones as a mark of respect, but another theory says that they were ritual offerings, perhaps linked to ancestor worship.

Fragments of human bone have been found along the Avenue, suggesting that many more burials took place. 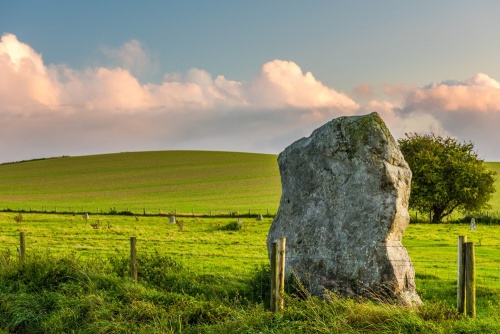 The first stone at the northern end of the Avenue

Near the Overton Hill end of the Avenue is an earthwork bank, which runs in a line for 320 metres. Though perhaps of medieval origin, this bank has been suggested as a being contemporary with the Avenue. Some investigators suggest that a cove, or semi-circular enclosure, once stood within the Avenue, but this suggestion is not universally accepted.

A similar avenue of stones, dubbed the Beckhampton Avenue, once ran from the western side of Avebury, though most of this avenue has been lost. Only two standing stones, known as The Longstones, still stand.

The West Kennet Avenue follows the course of the B4003 between Avebury village and its junction with the A4 at West Kennet. You have two main choices for parking. There is a small layby at the southern (West Kennet village) end of the B4003, on the western (northbound) side of the road.

The layby has room for 2-3 cars. From there, simply go through the gate into the field on the western side of the road and you will immediately find yourself amid the standing stones at the southern end of the Avenue. 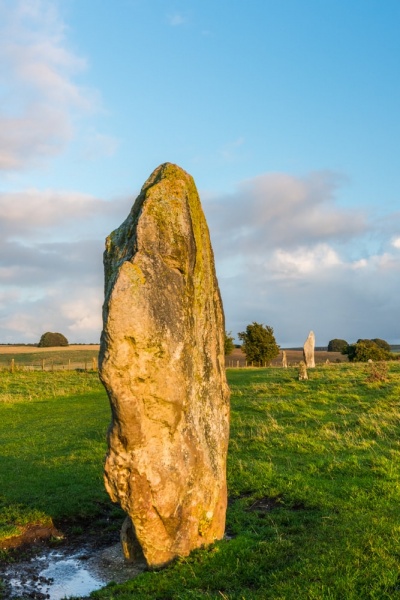 The Avenue in late evening

Alternatively, you can park in the main Avebury visitor car park on the A4361 (Beckhampton Road), at the south-western edge of Avebury village. The car park is pay and display. It is run by the National Trust and Trust members can stay for free.

From there a signposted footpath leads into the village and the henge. You have to walk through the south-western part of the henge, cross the A4361, walk to the southern edge of the henge, go through a gate, cross the B4003 to its west side, and you will find yourself at the northern end of the Avenue.

Be aware that cattle graze in the field. They didn't bother us when we visited, but you do need to watch where you step!

About West Kennet Avenue
Address: B4003, Avebury, Wiltshire, England
Attraction Type: Prehistoric Site
Location: The best way to visit is to park in the National Trust parking area in Avebury and walk across Avebury henge to the beginning of the avenue. Try to avoid visiting at the time of the summer solstice, as the crowds can be very large.
Website: West Kennet Avenue
English Heritage - see also: English Heritage memberships (official website)
Location map
OS: SU105695
Photo Credit: David Ross and Britain Express