HERITAGE HIGHLIGHTS:   Oh, the mystery! Why was it built? 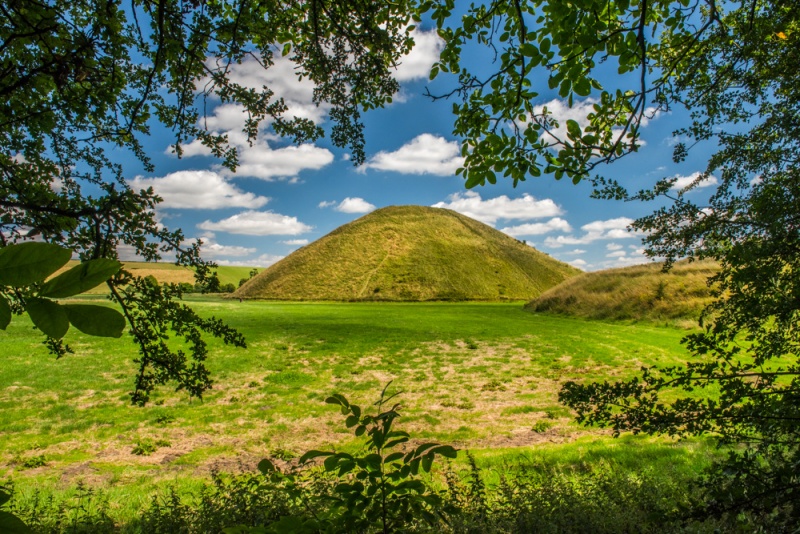 Enigma -- according to Webster's Dictionary the word means 'something hard to understand or explain; a mystery'. I don't know if the linguists at Webster's were thinking of Silbury Hill when they wrote that definition, but they might well have been, for this mysterious conical hill on the Wiltshire plains near Avebury defies all the efforts of modern scientists to discover its purpose.

Silbury Hill is the largest human-built mound in Europe. In sheer volume of material, it rivals the Great Pyramids of Egypt. It has been estimated that it would have taken a team of 500 men about 15 years to complete Silbury Hill, and then only if they were working continuously.

Yet unlike the Great Pyramids, we have no clear idea of the purpose for which Silbury Hill was built. It was assumed by many early investigators that the hill is a massive burial mound, a monument to the colossal ego of some long-dead Neolithic chieftain.

It seems a fair assumption, yet no grave has ever been found at Silbury. Channels have been cut into the hill on several occasions, but nothing resembling a tomb has been found - indeed no human remains of any kind have been discovered at Silbury.

So if it isn't a tomb, what is it? That question has puzzled generations of archaeologists. One of the unproven theories is that it was a form of sundial or astronomical observatory and that at one time it may have had a large pole upon its summit that cast a long shadow across the fields below.

We do know that Silbury Hill was built in three distinct phases. The first was a mound some 20 feet (5.5 m) high, which was then capped with a covering of chalk rubble. This layer was then built up with a final covering of chalk excavated from the 25 foot deep (7m) ditch which surrounds the base of the hill.

Seeing Silbury Hill for the first time can something of an anticlimax, for it appears without fanfare as you approach along the busy A4, which sweeps by within feet of the hill's base. There is a parking lot at Silbury Hill, just before you reach the monument from the west. It has room for about 20 cars and also room for coaches. Sadly, this is as close as you can (legally) get to the hill, as a fence keeps people at bay. 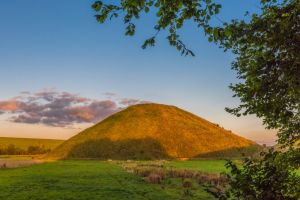 Silbury Hill at dusk on a summer evening

The hill has been the unfortunate victim of its own popularity and has suffered erosion from enthusiastic visitors climbing to the peak. There are now signs warning people not to approach the hill, but as there is no supervised access, some people ignore the warning and climb it anyway, causing further erosion.

Silbury Hill is on the A4 between West Kennet and Beckhampton, Wiltshire. There are two small laybys on the south side of the A4 opposite the Hill, and a much larger parking area on the north side of the A4 just west of the Hill.

You can see Silbury Hill very clearly from the laybys, but it is a good idea to not cross the road for a closer look since the A4 can get very busy and crossing the road safely can be difficult. Pulling into the official parking area is a much safer bet.

From the parking area, there is a very short walk to an observation point looking east over a farm field to the Hill. There is an information panel giving a history of the site and background on archaeological interpretations of the Hill.

Please, please respect the fences and do NOT climb on the monument! On our last visit, I saw several people (and a dog) climbing on top of the hill. It might seem innocuous, but so many people visit Silbury Hill each year, and if even a small fraction climb on the Hill it can cause irreparable damage.

You can already see well-worn trails to the top created by people ignoring common sense and climbing up the hill. Please keep the hill safe for future generations to enjoy and do not cross the fences! 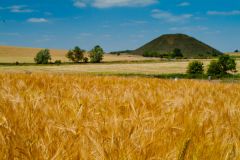 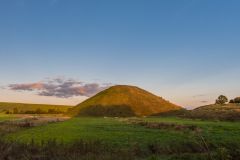 More self catering near Silbury Hill