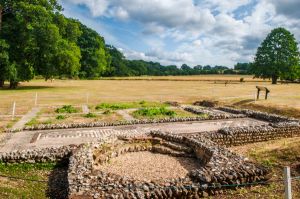 In 1942 a farmer near the Hampshire village of Rockbourne was digging out a ferret when he came across oyster shells and a bit of tile. Luckily the farmer called in a local amateur antiquarian named AT Morley Hewitt, who dug an exploratory hole. To his enormous surprise, Morley Hewitt's hole exposed a Roman mosaic floor!

Full-scale exploration of the site had to wait until 1956, when Morley Hewitt had purchased the site. Annual excavation work revealed a Roman villa built on the remains of a late Iron Age Celtic homestead. The site was occupied continuously throughout the Roman period and only fell out of use in the late 4th or early 5th century.

Over 70 rooms have been excavated, though it seems likely that only 40 of these were in use at the height of Rockbourne's prosperity. Perhaps the most exciting find occurred in 1967 when a pottery jar was uncovered, containing over 7000 Roman coins.

The jar was buried about AD 295, around the same time that a similar jar containing over 4000 coins was buried about 1/2 mile from the villa. A mystery remains though; we can presume that the coins were buried to preserve them, but why were they never recovered, when the villa remained in continuous occupation?

Though much of the excavated remains have been filled in to prevent deterioration, enough still remains to give visitors an idea of how the complex of buildings looked. The major structures have been outlined in gravel so that visitors can identify the outline of buildings.

Unfortunately, early excavation work did not always record finds properly, so subsequent interpretation has proved somewhat difficult, but we can still piece together a good estimate of Rockbourne's past. 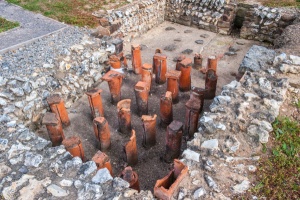 The earliest settlement at Rockbourne was a simple round hut built of timber. This Iron age hut was later extended in Roman style to create a very simple house with 3 rooms. Around 150 AD that first Roman house was replaced by a more extensive complex of rooms, called the West House.

This was later added to, with a separate bath complex comprising warm and cold rooms, and hot and cold plunge pools.

An additional north range was added around AD 200. A second, separate bath suite was added later in the 3rd century. This fell out of use in the 4th century, when the original, or West bath suite, was extended.

The villa must have fallen on hard times in the 4th century, as several of the domestic chambers seem to have been put to agricultural use. By the early 5th century the villa was falling into disrepair

Rockbourne is operated by the Hampshire County Council, who have done an extremely good job with both the museum and the interpretive panels around the site.

The museum contains finds from the site, including bits of decorative plaster, items of furniture, mosaics, and a lovely decorative finial carved from Chilmark stone. There are pieces of jewellery, beads, bangles, rings, bracelets, and even a leather sandal.

Also in the museum are pieces of two adult male skeletons found on the site. These are probably post-Roman, as Romans usually did not bury their dead in or near dwellings. It is possible that at least one of the skeletons is that of an Anglo-Saxon squatter who was unfortunate enough to take shelter in the remains of the villa, only to have it fall in him.

Rockbourne is wonderfully peaceful. When I visited on a summer weekend afternoon I practically had the whole place to myself. The museum is extremely interesting and gives a very good idea of how people lived in the villa, and how the site changed over time. There are information panels around the site that give a very good idea of the functions of the various buildings and how the villa developed and changed over the centuries.

Visible from the villa is a tall monument to the memory of Lt Gen Sir Eyre Coote of West Park, a now-demolished mansion. Coote served in India and was Commander in Chief of British forces in India from 1769-1783. 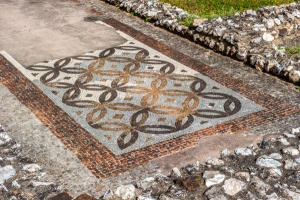 Mosaic flooring in the frigidarium 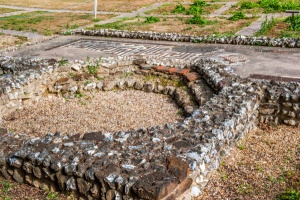 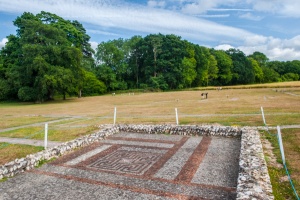 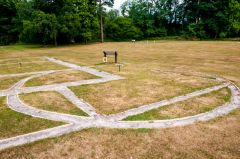 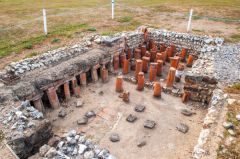 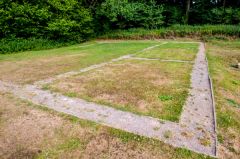 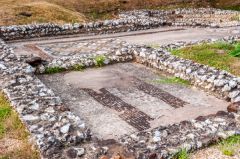 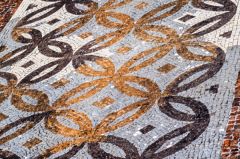 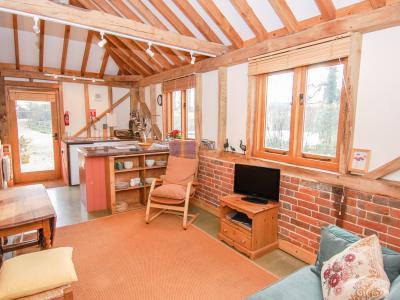 This holiday cottage is near the village of Rockbourne in Hampshire and sleeps two people in one bedroom.
Sleeps 2 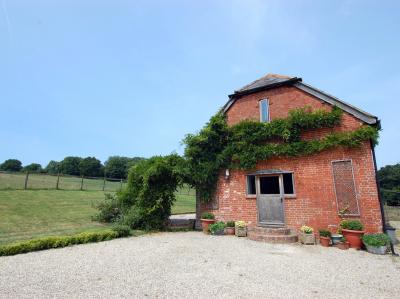 This detached barn conversion is in the village of Sandleheath near to Fordingbridge in Hampshire and can sleep 11 people in 3 bedrooms.
Sleeps 13