HERITAGE HIGHLIGHTS:   The Rudston Monolith stands beside the church 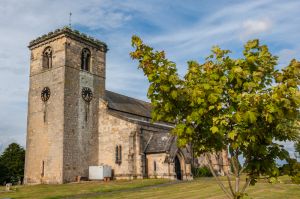 All Saints church in Rudston is a lovely early Norman church built around the year 1100 by William Peverel, lord of the manor. Of that Norman church, the tower remains, and you can still trace the original west entrance in the stonework at the west end of the church.

The Norman building was extended in the 13th century when both north and south aisles were added. The nave and chancel arch date from this rebuilding. In the sanctuary is a slightly later sedilia, or stone seat. In the north aisle is a squint, provided when the north aisle was added so that people standing there could still see the altar.

Near the squint is a piscina, suggesting that there must have been a side altar in the aisle. Almost the entire west end of the church is dominated by a huge organ donated by Sir Alexander MacDonald of the Isles, who played it for over four decades.

Below Holtby's wall memorial is the great treasure of Rudston church, a beautifully decorated Norman font in tub shape. The font is wonderfully carved with geometric patterns and stands on a simple stone plinth.

There is one more treasure to mention, and that is outside, by the north-east corner of the church. There you will find the Rudston Monolith, a huge stone pillar standing 26 feet high, making it the tallest standing stone in Britain. The Monolith was set here around 2000 BCE, after being quarried and transported from the Cleveland Hills, west of Whitby. 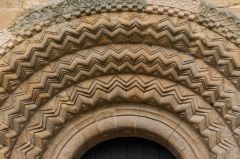 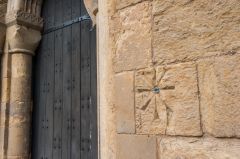 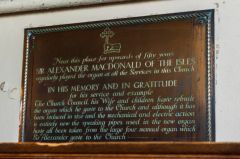 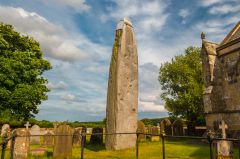 More self catering near Rudston, All Saints Church >>

More bed and breakfasts near Rudston, All Saints Church >>