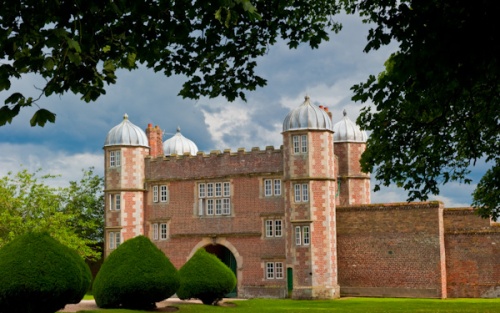 I don't always agree with Simon Jenkins, author of England's Thousand Best Houses. But when Jenkins calls Burton Agnes Hall 'the perfect English house' I have to admit he's probably spot on. Burton Agnes is indeed, if not perfect, then one of the most enjoyable historic houses in Britain to visit, and one of my favourite historic sites in England.

There is not one historic house in Burton Agnes village, but two, side by side. The smallest and oldest is Burton Agnes Manor, a simple three-storey house with a beautifully vaulted Norman undercroft. The Manor was built by Roger de Stuteville around 1170 and remained in use until the early 17th century.

Burton Agnes is proud of the fact that the property has never been sold since it was built; though the male line died out on several occasions, the estate passed through the female line in unbroken succession from Stuteville through to the current Boynton family owners. One of Stuteville's daughters was named Agnes, and it may have been she who gave her name to the village and hall. 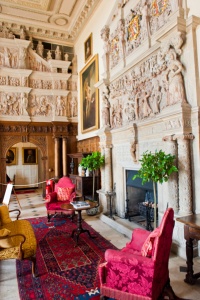 One of the descendants of the Stuteville builders of Burton Agnes was Sir Walter Griffith, who came to live in the manor here in 1457 and added a great hall above the Norman vaulted undercroft.

When Sir Walter's great-grandson Henry Griffith was named to the Council of the North in 1599 he decided to replace the small, cramped manor with a grand new house in fashionable Elizabethan red-brick. Rather than tear the old medieval manor down he simply built his new house beside it, beginning around 1601.

His architect was Robert Smithson (or Smythson), master mason to Queen Elizabeth. Smythson was responsible for other great houses of the late Elizabethan period, including Longleat House (Wiltshire), Hardwick Hall (Derbyshire), and Wollaton Hall (Nottinghamshire).

The new Burton Agnes Hall is a superb mansion laid out around a central court. Save for the addition of 18th-century windows the house is remarkably complete and true to its early 17th century roots. Griffith would immediately recognise Burton Agnes as his house if he were to see it today. 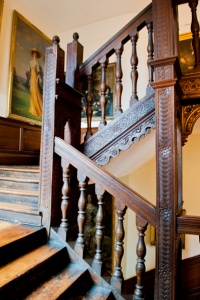 Any decent 400-year-old house must have a ghost (I think its a by-law), and Burton Agnes ticks that box. The ghost is said to be the spirit of Katherine (Anne) Griffith, who died here in 1620. Katherine was the youngest daughter of the Sir Henry Griffith who built the Hall, and she was obsessed with the beautiful new house, which was not yet complete. She was wounded by robbers while on a trip to nearby St Johns Well and was brought back to Burton Agnes to die.

Before she breathed her last, Katherine made her sisters promise that a part of her would always remain in the house. They agreed, but when Katherine died her whole body was buried in the churchyard.

Ah, but then her ghost began to haunt the Queen's State Bedchamber in the house. Her troubled sisters consulted the vicar, and the body was exhumed, the skull was removed, and brought into the house.

Subsequent owners tried to remove the skull but each time they tried the troubled spirit of Katherine Griffith returned to haunt them. Finally, the skull was hidden within the walls, probably somewhere in the great hall, and the hauntings ceased. 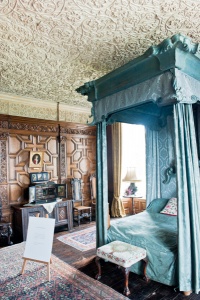 When the direct line of male Griffith owners died out the estate passed to the Boynton family. Perhaps the most famous - or infamous owner of Burton Agnes was John Parkhurst, who married Mary, widow of the 6th baronet.

Parkhurst, known as 'Handsome Jack', was a rake, who went through money like water goes through a sieve. It was said of Handsome Jack Parkhurst that he raised his three stepsons 'in every sort of vice'. Each stepson succeeded to the estates in turn.

One, Sir Francis, bred gamecocks and built a cockpit in Park Field. A subsequent owner was Sir Henry Somerville Boynton, a much more refined sort of chap who was an avid naturalist. He built aviaries in the Hall and established a large collection of stuffed birds.

In the 20th century, perhaps the most influential owner was Marcus Wickham-Boynton, who restored the Long Gallery and amassed the collections of Chinese porcelain, fine furniture, French paintings, and Epstein bronzes which fill the house today.

The Hall is accessed through a marvellous gatehouse, also in red brick, and built in 1610. The gatehouse is as large as a small house itself, rising three storeys, with four flanking turrets. Above the gatehouse entry is a coat of arms of James I. 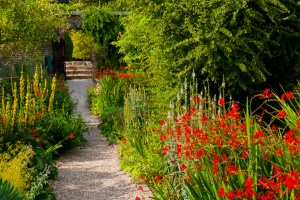 The heart of the house is the Great Hall, which features a marvellously detailed chimney piece and a fabulously carved oak and stone screen. Parts of the screen were brought to Burton Agnes from Barmston. The Jacobean staircase is a gem, with beautifully worked oak carvings decorating every surface. Another highlight is the Long Gallery on the third storey.

This barrel-vaulted elongated chamber was ostensibly made for exercise in inclement weather, but equally, it was intended to show off family art and furniture. The real prize here though is the wonderful plasterwork. There is wonderful original Elizabethan plasterwork and woodcarving throughout the house.

The Hall sits in colourful award-winning gardens, which include the national collection of campanulas. There is a walled garden with over 4000 different plant species, a jungle garden (with exotic and large-leafed plants), a yew maze, and woodland walks throughout the estate.

Burton Agnes Hall is a former winner of the Historic Houses Association/Christies Garden of the Year and has been a multiple Gold award winner in the annual Yorkshire in Bloom competition.

The friendly guides were marvellous when I wanted to ask a question, but they left me free to wander about if I wanted to. And wonder of wonders, they were happy to let me photograph the interior of the building (other stately homes take note!).

For someone like me who was born with a camera attached to the end of my arm (well, it seems that way) this was a real blessing, and I happily snapped away at all the historic architecture bits and bobs I discovered around the house as I wandered. I was as happy as a pig in a mud puddle. 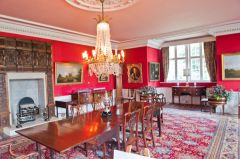 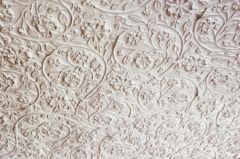 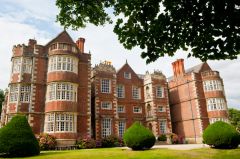 Self Catering near Burton Agnes