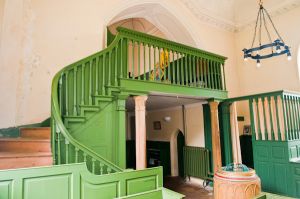 Standing beside Boynton Hall manor is this delightful Georgian brick and stone church with a 15th-century tower. The exterior of St Andrew's gives little clue to the wonderful Georgian Gothick interior that awaits inside. The east end of the church is set aside as the mausoleum of the Strickland family of Boynton Hall.

Unfortunately, the mausoleum is inaccessible, though you can view the Strickland tombs through the wrought-iron barrier behind the altar.

William Strickland, the builder of the Hall, was said to have brought the first wild turkey to Britain from America in the late 16th century. As a result, there are carved and painted turkeys all over the church; most notable is the lectern, shaped like a turkey instead of the traditional eagle.

The lectern was carved by Harry Scott, son of the Boynton Estate carpenter. Harry’s father, Henry, carved the panel above the side door near the altar.

Verdict:
The interior of the church is a delight of Georgian style, with painted pews and a west gallery reached by a curving spiral stair. A quirky, wonderful period piece.