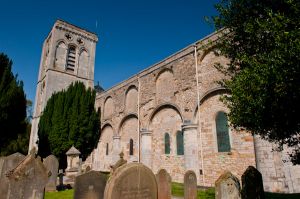 St Mary's Priory in Old Malton is the only Gilbertine church which is still used for regular worship. Of all the religious orders that founded monastic churches during the medieval period, only the Gilbertine order originated in England; all the other orders were imports from the Continent.

The church was begun in 1150 and finished around 1200 when the impressive west front was completed. The church is an imposing size and height, so it is sobering to realize that the original building was roughly two-thirds larger than the church we see today!

The most interesting feature of the church interior is a series of 35 misericords. Of these, eight are medieval originals, dating from the 15th century, while the other 27 are wonderfully carved modern carvings created by Temple Moore, who also designed the wonderful organ case and baldacchino. The medieval misericords depict real and imaginary beasts, and a pineapple.

The latter deserves an explanation; pineapples were unknown in Europe before Columbus brought them back from America. The pineapple became a symbol of the exotic, a prestigious item symbolic of social status. Other subjects include a gryphon, lion, hare, eagle, owl, and most exotic of all, a camel.